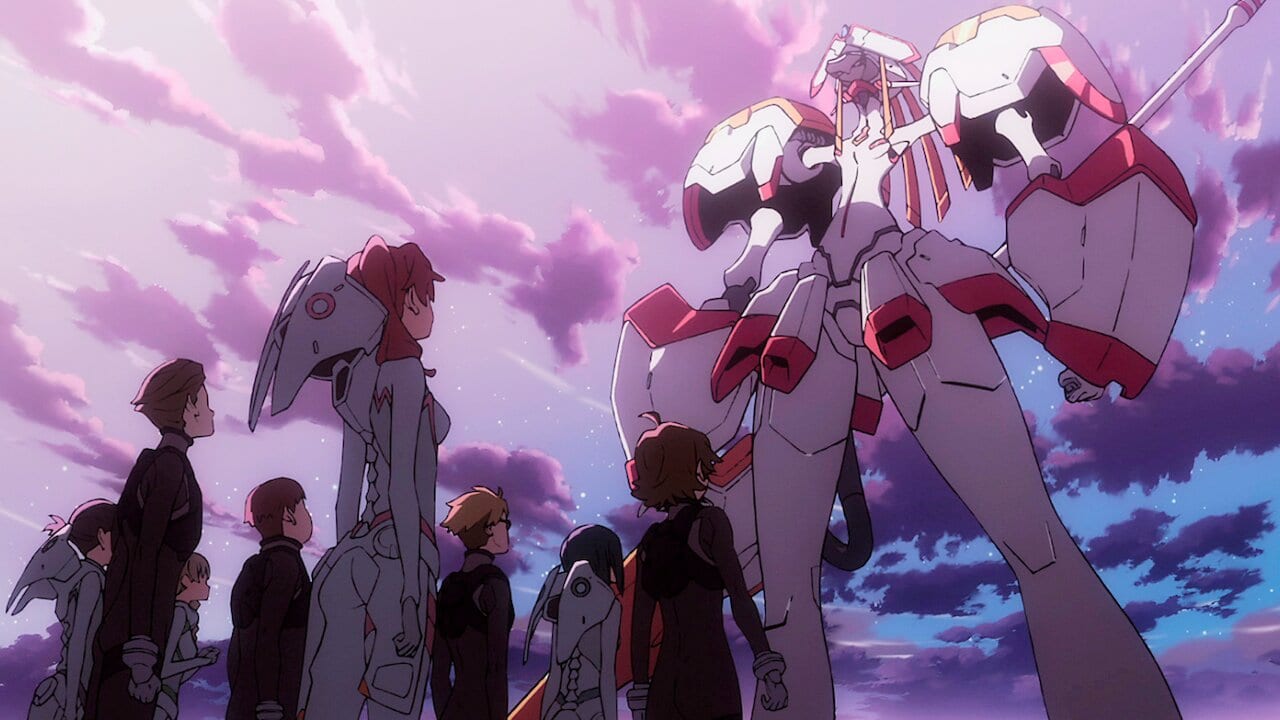 Ever since it debuted in 2018, Darling in the Franxx has won the hearts of many anime fans thanks to its bombastic visuals and over-the-top action. Since it is only 24 episodes, though, many are likely craving more of that fun action.

To help you fill that void, we’ve created a list of shows that encapsulate the show’s style, plot, and overall rebellious spirit. Here are five anime like Darling in the Franxx if you’re looking for something similar.

If you’re looking for big mecha battles and main characters that are out to prove themselves to the world, look no further than Gurren Lagaan.

Set in a future where humanity has been pushed underground by a tyrant known as the Spiral King, this anime follows two teenagers, Simon and Kamina, whose sole goal in life is to reach the surface.

That dream becomes a reality when the two stumble upon an ancient mecha known as Lagann. What follows is an amazing story fueled by action, drama, and a drive to survive.

On top of a similar core concept, Darling in the Franxx fans will also likely love this show, as its success is what led to the creation of Studio Trigger, aka the team behind Darling in the Franxx. Each show boasts awesome and unique mech designs and some of the flashiest animations you’ll see in the robot fighting genre.

It has been 300 years since the great Calamity War between Earth and its outer space colonies, and both sides are still feeling the fallout. Yet, you wouldn’t know this by looking at Earth’s military power, as the organization responsible for keeping the peace, Gjallarhorn, is sitting pretty.

Fed up with the inequality, Kudelia Aina Bernstein and Chryse Autonomous Region spur an independence movement into action on Mars, taking it upon themselves to revolt. When Gjallarhorn tries to assassinate members of the rebel group, another war breaks out that serves as the catalyst to a new age.

Mobile Suit Gundam: Iron-Blooded Orphans is perfect for Darling in the Franxx fans who really love the show’s rebellious aspect. Both series see teenagers fighting for their ideals and dreams amidst a tumultuous world that treats them like dirt.

While the mech designs may not be as flashy in Mobile Suit Gundam: Iron-Blooded Orphans, the dark and gritty tones of its story are more than enough to keep fans of Darling in the Franxx hooked.

If you’re looking for visuals, eye candy, and characters that are on par with Darling in the Franxx, Guilty Crown is pretty close to a perfect match.

This anime tells the story of Ouma Shu, a high school student who comes into a rare power that lets him draw out psyches that are given physical form.

Due to this unique power, Shu is dragged into a huge governmental conflict that eventually sees him join a rebel faction called the Funeral Parlor. The only way he’ll be able to get out of this situation is to use his newfound power to fight back.

In the process, Shu and the rebel faction uncover information so dire that it may have been better left as a secret. Regardless, they push forward in the hopes that they can free humanity and get things back to where they once were.

On top of all of that, Darling in the Franxx fans will surely love the bond that is formed between Shu and Inori, as it parallels Hiro and Zero Two’s own darling relationship.

The year is 2015, and the world sits on the brink of destruction, as giant enemies, called Angels, herald Earth’s ruin. The only thing that can stop them are the equally giant machines-like beings that humanity has created, known as Evangelions.

Created from the samples of the First Angel that appeared on Earth, Adam, Evangelions are actually humanoids, not robots. In order to operate at their fullest potential, they require special pilots that are capable of synchronizing their souls with them.

Even at just 14-year-old, Shinji Ikari is one of those rare pilots, meaning he must sacrifice his once average life to try and save humanity. The story that follows is a wild ride, as a psychological drama unfolds full of secrets no one could have imagined possible that are brought to the surface.

This all results in a barrage of awesome action that sees huge, cool-looking creatures squaring off against each other, which is also one of the core appeals of Darling in the Franxx.

Kill la Kill follows Ryuuko Matio, a young girl hell-bent on finding the people responsible for the murder of her father and getting revenge. Her only clues lead her to the prestigious and mysterious Honnouji Academy.

To pry the information she needs out of its inhabitants, Ryuuko must rise through the ranks of the hierarchy, which can only be done by defeating the Elite Four. Luckily, she’s got help from a godly being known as Senketsu.

Together, the two work together to uncover the conspiracy behind her father’s death and figure out the culprit behind his murder once and for all.

While the overall art style may be different and there isn’t much mecha action to speak of, Darling in the Franxx fans will feel right at home with the Kill La Kill’s high-octane action, rebellious plot, and feisty characters. Honestly, that shouldn’t come as too much of a surprise, though, as they are both created by Studio Trigger.

The Legend of Heroes: Kuro no Kiseki Reveals Even More Characters & Gameplay

The Legend of Heroes: Kuro no Kiseki Introduces New and Returning Characters With New Screenshots