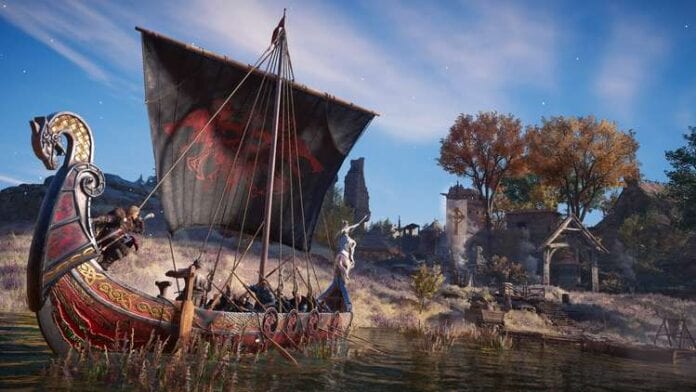 Introduced in the latest update and the Yule Season, Assassin’s Creed Valhalla River Raids are now a thing. This new gameplay mechanic makes use of the ‘raid’ system that made up a large part of the base experience. Completing these River Raids also nets you some powerful new gear. In this guide, we’ll talk you through how to start River Raids in AC Valhalla.

How to Start River Raids in AC Valhalla

To start a River Raid, you’ll first need to make sure your game is updated to 1.1.2. It’s a fairly hefty update that went live just yesterday, Feb. 17.

Once this is installed, load up your game and you should have a quest called ‘A River to Raid.’ The quest marker is just southeast of Ravensthorpe along the river. Note that you must have finished at least the first story arc of the game to take part in River Raids (Ledecestrescire or Grantebridgescire).

Speak to Vagn here and climb aboard his longship for a quick rest raid. This acts as a tutorial for all future River Raids you do in AC Valhalla.

After completing the raid with Vagn, you’ll then be required to upgrade your Jomsviking Hall to accommodate your River Raiding crew.

You’ll now be able to take on the first two rivers: River Exe and River Severn.

All Settlement Types You Can Raid

During a River Raid, you’ll take on three different types of settlements:

Civilian locations are easy to raid, but don’t have the most lucrative rewards for doing so. Military locations are more difficult to raid, but have plenty of crafting materials, rare Foreign Supplies and the new armor sets that come as part of the Yule Season update.

Finally, Monastery locations contain new Books of Knowledge to make your Eivor the most formidable they possibly can be.

That’s everything you need to know on how to start River Raids in AC Valhalla. For more tips, tricks and guides, head on over to our wiki, search for Twinfinite, or check out more of our coverage on the game below.

Valheim Stone Golems: Where to Find & How to Beat Them
Valheim: How to Build a Dock
Warzone: How to Change Field of View (FOV)