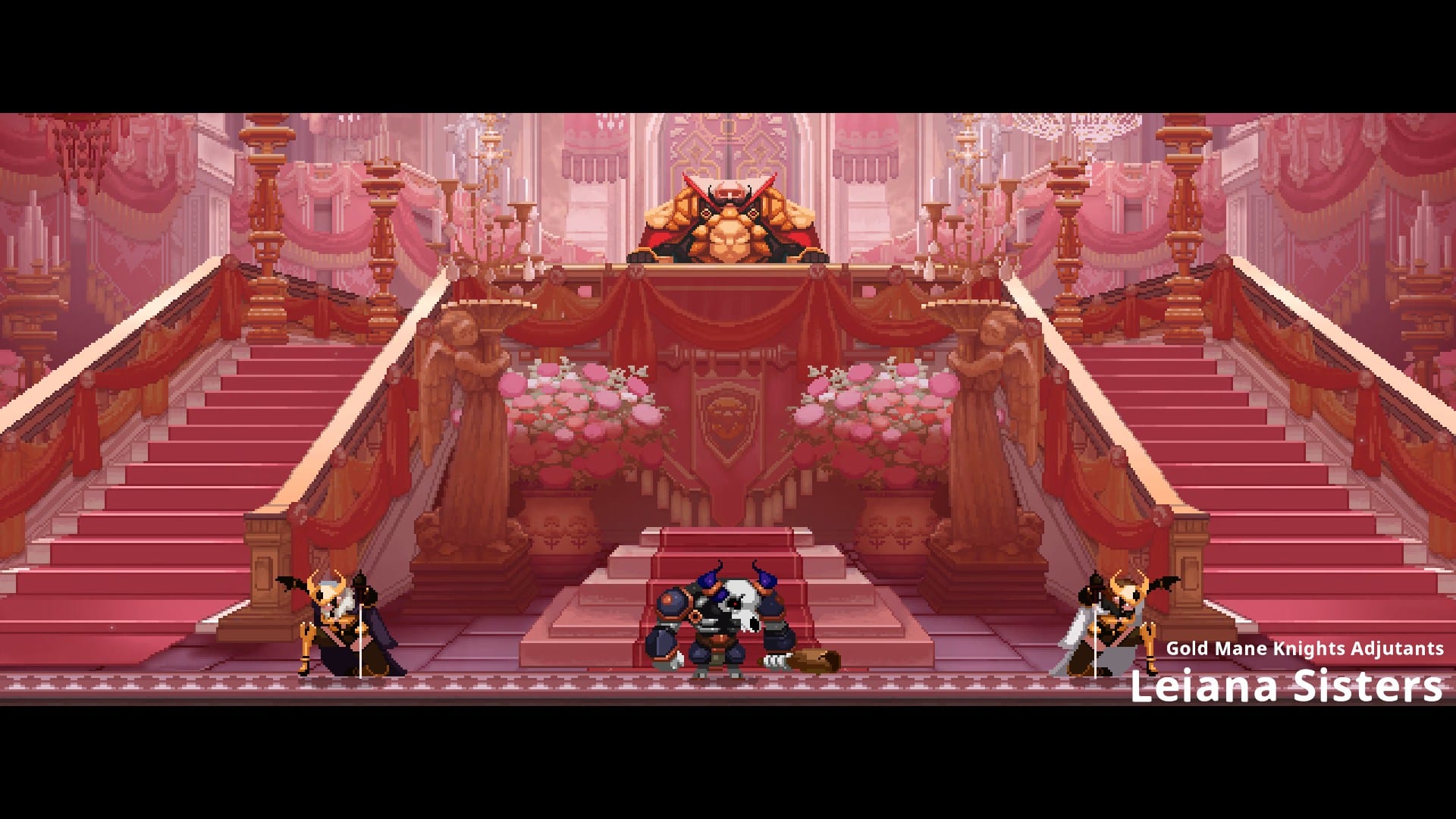 Welcome to the latest of our Skul: The Hero Slayer guides. If you’re at this point in the game you’ve either already read our tips and tricks, and Yggdrasil boss fight guides, or you don’t really need to anymore. This guide is here to talk you through how to beat the Leiana Sisters boss fight in Skul’s World 2.

There is a lot to keep an eye out for during this fight as you will be fighting against both sisters at the same time, and trust me, they are fast.

There is also a second phase to this fight, but we’ll get to that in a minute. First, let’s go over some of the phase one attacks.

If you see the two sisters standing on both sides of the screen, there about to dash toward the opposite side, doing a full sweep of the map. Just make sure to jump up and you should have no trouble avoiding the attack.

Anytime you see one or more bright yellow lines appear across the screen, it means the sisters are about to attack and if you are lined up with any part of that line when they do, you’ll take some serious damage. Just make sure to move away from the lines as fast as possible.

If one sister appears in the air on either side, she’s about to slam down to the ground. Just move out of the way before she does.

If one sister on the side spawns three lighting bolts, she’s about to send them toward you one at a time, again do your best to jump out of the way. If both sisters appear with lighting bolts appearing on both sides above you, make sure to jump, stay still, and then jump again to avoid the three consecutive attacks.

Your first jump will cause them to angle their attacks toward the air, which will miss since you’ll be back on the ground. Then they’ll angle down, so you jump up and finally you should have landed by the time the third shot shoots straight across the screen.

If a sister holds their sword into the air and glows yellow for a brief second, they are about to send shockwaves in both directions away from them. They do not go super far, so its easiest to just dodge away to avoid this attack.

The sisters have a number of basic attacks from regular jabs to individually dashes across the screen. Just keep an eye out and avoid these attacks like you would any enemy and they shouldn’t cause you much grief.

Most of the time you’ll only be fighting one sister, which is conveniently as you’ll need to kill one to move onto phase 2. It is helpful to get some damage in on the other sister though as that damage can carry over to phase 2 if you deal enough of it.

Now that her sister is dead, whichever one you left alive is pissed and will now move into her awakened form. This new form basically just amplifies most of the phase 1 move set.

Again, if you see any kind of black line appear on the screen, move away from it as fast as possible. This is especially hard when she does her ultimate move spawning black lines all across the screen. Try your best to get away from them and dodge if you have to.

Her dash across the screen will now leave a trail of black magic that you don’t not want to touch so try to stay in the air until it clears up. You’ll know this attack is coming as the trail of magic will flash on the screen before she makes her dash, leaving behind the real damaging magic.

She has a new move that will spawn a series of black bolts from one side of the screen to the other. Dashing toward the direction these shots are coming from will help you avoid taking any damage here.

Her ground slam will spawn dark waves in both directions, similar to the shockwave move from phase 1. Jump over or dash through these.

Other than that, she also has the regular jabs and dashes. She often dashes from the air in a similar move to her ground slam, but this can easily be dodged by walking out of the way as it does not fire off the dark waves.

Your strategy here is similar to the Yggdrasil fight in that you’ll want to deal as much damage as possible in between the sister’s attacking segments.

Most of the time you’ll only be fighting one, and while you will need to kill one to move on to phase 2, as I mentioned earlier it is good to get in some damage on the other.

Whichever sister survives phase 1 will receive a portion of their health back, but it is not enough to fully heal them so if you get enough damage done in phase 1, they won’t start off phase 2 with full health.

If you have any skill or particularly, quintessence that can deal a lot of damage to the two of them simultaneously, try and hold onto it until both sisters are on the screen to make the most of your attack.

Hopefully that helps you move onto the third area of the game, and be prepared as you still have a long way to go and it only gets harder from here. That’s all you need to know about how to beat the Leiana Sisters in Skul. Be sure to search for Twinfinite for more tips and information on the game.