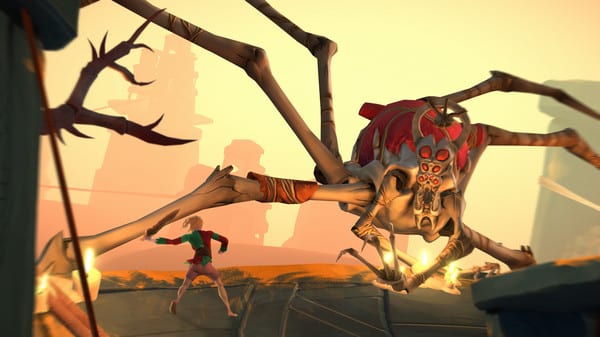 Gods Will Fall is a brand new action-adventure game where players control eight Celtic warriors tasked with defeating the gods that are wreaking havoc on their world. To defeat them, they’ll need to traverse dungeons, gain valuable items, and slay hoards of enemies. One such way to earn items that’ll help you beat the gods is found in the Burial Mound. Here is everything you need to know about the Burial Mound in Gods Will Fall.

What is the Burial Mound in Gods Will Fall?

As soon as you get control of your characters, you’ll be able to roam around the map as you please. The first spot you’ll likely head to is the cave located right in front of where you were dropped off.

Just to the north of this area, you’ll find an area that looks like a graveyard, known as the Burial Mound. At first you won’t be able to really do anything here.

Eventually, though, the Burial Mound is an area you can come to if you want to get weapons for your warriors from the Barrow Hag. The catch is that you must sacrifice one of your characters as a tribute.

Personally, I wouldn’t recommend doing this, as it didn’t net any rewards worth getting rid of an entire character, especially since the selection is random. The one time I did use it on my first playthrough, my best warrior was taken and I only got weapons back that were worse that what I already had.

If the idea of sacrificing one of your own doesn’t turn you off, or if you just want to get the Buried Treasure trophy or achievement, you’ll need to get an item that the Barrow Hag wants. To be specific, you’ll need to get a bone spear that you’ll shove into the ground in the Burial Mound.

It could merely have been a coincidence, by I was able to unlock this by defeating Osseus – though considering he is the God of the Bone realm, it is likely that he’s the only one to give it to you.

Once get the sphere, head over to the mound and interact with it. This will bring up the Barrow Hag, who will look through your warriors and drag the one they want off into the abyss.

That is everything you need to know about the burial mound in Gods Will Fall. Still on the hunt for more help defeating the gods? Be sure to search Twinfinite for plenty of other guides, tips, and FAQs.