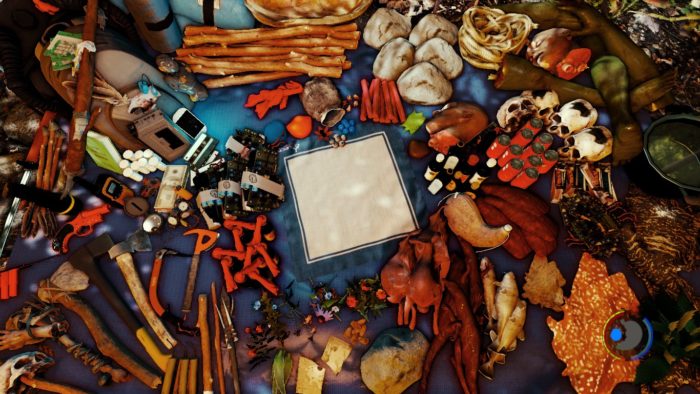 The Canadian wilderness is a harsh and terrifying place to be stranded, but with this selection of the best The Forest Mods, you’ll be well-equipped for survival. Here are some more posts like this, if you’re interested, too: Best Sims 4 Mods, Best ETS2 Mods, Best Skyrim Mods, and more!

Let’s start with the mack daddy, and work our way from there. The most popular mod available for The Forest offers you the world, to bend at your will as you see fit.

The ultimate cheat menu does exactly as advertised, including the abilities to freeze time, instantly build and repair, respawn animals, items or mutants, or suddenly fly through the air like Poochie returning to his home planet.

And those are just the hotkey options; there are a slew of other cheats at your disposal, from control of the weather and environment to everyone’s ultimate dream: holding infinite logs at one time.

Once you’ve messed around with this mod long enough, mere mortals will kiss your feet. But don’t worry, there are plenty of other fun (read: kinda stupid) mods for you to try out, too.

Like my grandfather used to always say, there’s nothing worse than getting lost in the deep dark woods, especially when it’s teeming with cannibals. Arming yourself with this handy dandy map will have all of those suckers marked right there, so you’ll never be caught flatfooted again.

You will also be able to see the location of all players on your server. You can hover over their icon to view their name, should you be so inclined.

It’s important to know the identity of your allies in the quest for survival, even if it’s something as unfortunate as FartsOfFury.

If you’re noticing some visual inconsistencies here, please note that the included picture isn’t from the mod, but rather from the interactive map painstakingly created by a community member.

This is also very helpful, but not mod-related, so we shan’t extrapolate further. Let’s just tip our hats to the cartographers who make our lives easier.

I’ve got gadgets and gizmos aplenty. I’ve got whozits and whatzits galore. You want thingamabobs? I’ve got twenty! But who cares? No big deal. I want… more.

So I installed this mod, and pressed F7 to completely fill my inventory with everything I could ever hope for. It may not be the most rewarding way of amassing goods, but you can’t argue with that efficiency.

The only question now is what amazing stuff you’re going to craft with all those resources.

Our recommendation is the Happy Birthday Trap, because nothing says celebrating someone’s special day quite like a bed of spikes lodged up their bottom.

This mod introduces an RPG levelling element into The Forest, rewarding you with points for killing enemies that you can invest into improving various stats.

Gain experience in order to boost your stamina, jumping ability, attack power, chainsaw fuel, fall damage and how long you can hold your breath, among others.

It’s a neat tactical addition that challenges you not only to face off against stronger enemies for better gains, but to carefully decide where best to invest your hard-earned XP.

Just don’t feel too bad when the cheat menu player literally flies right over your head.

There is little in this life quite as exhilarating as grabbing hold of a zipline, screwing up your courage, and whizzing through the air.

The prospect of an infinite zipline, then, is exhilaration times infinity.

Set up your starting point and away you go, for all eternity.

Maybe you can even leave the island altogether this way?

The narrative of The Forest is a little bit up to interpretation, but we’re fairly sure it wasn’t canonical that Eric Leblanc gave up on saving his son and instead constructed a zipline that took him off into space.

The future of commercial aviation is a little bit shaky for this fictional airline, because every time someone makes the unfortunate error of choosing to fly with them, they inevitably end up crashing in a heap somewhere deep in the Canadian wilderness.

Maybe it’s the route that’s to blame, who knows – the only thing that’s certain is that their insurance premiums must be sky high. SKY HIGH, CARL.

Whenever you’re jumping into a new game, you’re forced to suffer through the trauma of the crash each time, unless you have the strength and willpower to press the space bar.

With this mod, however, the leg work is done for you, and you can start fresh as a daisy right in the landing site.

Yes, we’ve gotten to a point of laziness where pressing the spacebar is too much for us. We have no shame.

Crafting yourself a home out of the resources around you sure is an exhausting affair.

Shelters are a requirement for your survival against the elements, but you’ll have to amass a hefty amount of logs if you want to construct something that doesn’t resemble Eeyore’s miserable house of twigs.

It’s time to work smarter, not harder, guys. Here’s a mod for you that cuts the necessary resources for all buildings literally in half. That’s right, you’ll be able to cut corners and reap the benefits!

It’s your own personal embezzlement scam, though perhaps it’s not quite as exciting when the thing you’re embezzling is wood. You won’t be able to play without this.

I mean, it would be pretty disappointing if we couldn’t find a tree-related mod for a game called The Forest.

Each night, trees will respawn by 10% of their total number as you sleep. That may sound like a good amount, but we’re a greedy bunch who seek instant gratification, so we like to apply this mod that maps spontaneous growth to the Shift+R command.

Like a wizard summoning sprouts from the very ground, we bless this world with our beautiful foliage. The only regret we have with this mod is that they missed the opportunity to call it ‘Treespawn’.

And that’s a damned shame. No way we could keep going without including this in this list for the best The Forest mods.

Sometimes, you just want to hang out with some cannibals without having to worry about a smug deformed freak strolling on over and messing up your business.

And you know what? That’s okay.

We live in a world where we have options, and just like in kindergarten, you don’t have to play with someone if you don’t want to. Mutants are known for hogging the slide, for example.

Apply this mod and you can adjust sliders that affect the appearance rates for the various baddies that lurk around. Theoretically, you could then reduce all of them to 0 and turn the game into a pleasant camping simulator. That might be fun?

Not enough hours in your day? Finding yourself running short of time and frantically scrambling to get things done? There are no prizes for guessing what this mod does, then. Well, maybe a little prize.

Like the kind you’d get in a cereal box in the early 90s.

By doubling the length of both the days and the nights, you’ll become the hyper-efficient go-getter that your parents always dreamt you would be.

Keep in mind, dusk in The Forest is not exactly a pleasant experience, so make sure you use your hours of daylight building a sturdy fortress that can ward off the things that go bump in the night.

Alternatively, feel free to spend that extra time playing with the infinite zipline, instead. Whee!

The Better Blueprints mod just gives you more options. Tired of following the rules of physics? Yeah? Well, this mode lets you build wherever you’d like, and it’s easier than ever.

With it installed, you can rotate items quickly, customize the color of blueprints, build without anchor point limits, and zipline for eternity, if that’s what you’re after.

You can also turn different parts of the mod on and off, so you can just pick the parts you actually want in your game.

This is a simple one. Want to carry more items to help you build as you explore The Forest, you could do with a bigger backpack.

This mode allows you to get exactly that.

You can even input 0 into the Notepad if you want to carry and infinite number of items.

Doing so will mean you never have to worry about it again.

Sleeping is helpful in The Forest as it passes time and allows you to heal. Much like in the real world, we all love a long night’s sleep.

And what better than one night’s sleep, as much sleep as you’d like.

The No Sleep Cooldown mod does exactly what the title says and allows you to sleep again immediately after your character has woken up.

While the healing is no longer really necessary, you’ll now be able to pass some more time if you need to.

If you’re fascinated by changing tides, the simply named Tides mod will be great for you.

If doesn’t change a whole lot in the game, and doesn’t make the game much easier, but it opens up different parts of the game’s shoreline at different times of the day.

More than anything else, though, it adds an extra level of realism to the game’s seas and oceans.

If you prefer games like Monster Hunter than show damage numbers, name your opponents, and let you see the health bars of your foes, the Damage Numbers The Forest mod will be great for you.

The naming is just a silly little addition, but the “highly customizable damage indicator that displays amount of health cannibal has left” could be really useful in your attempts at survival.

That does it for the best The Forest mods you can’t play without. Download them right now! Go on. We dare ya.