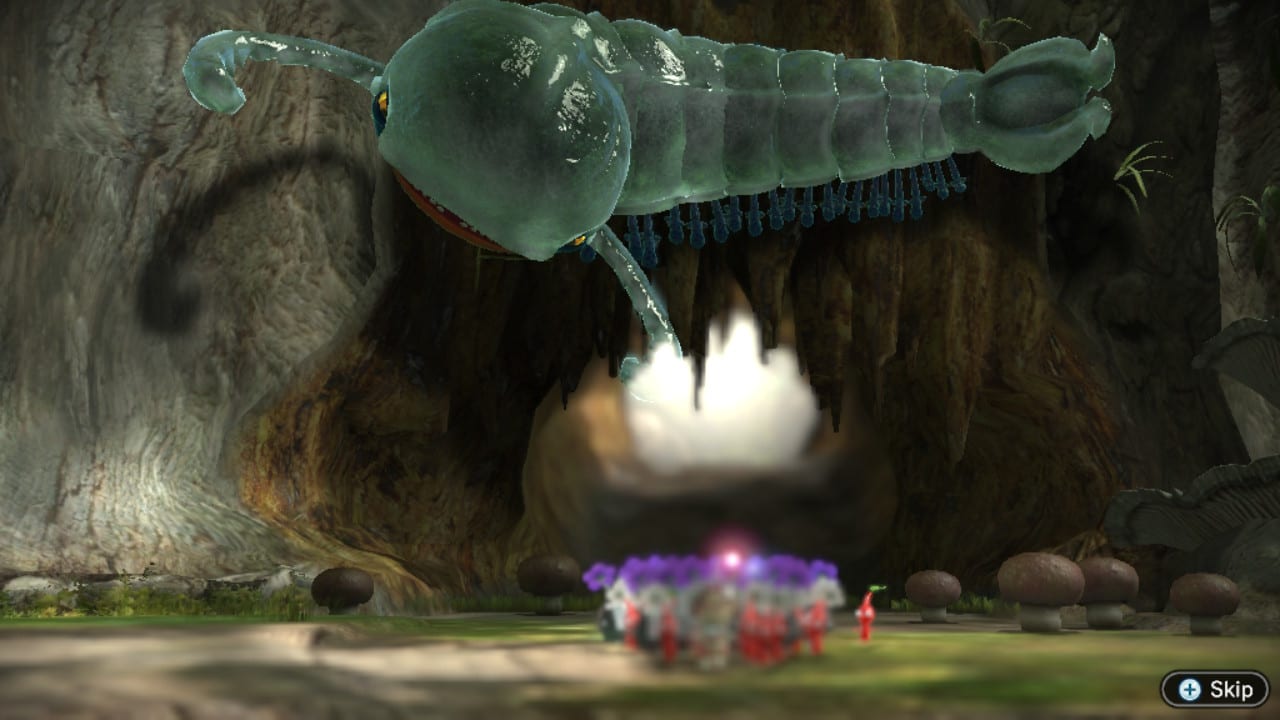 Considering Alph and the gang in Pikmin 3 Deluxe are so tiny, they’ll occasionally come across some terrifying bosses that are way bigger than you would expect them to be. The first boss in the game can be tough if you’re not taking the necessary precautions. But don’t you worry, friend –we’re here to help! Here’s a guide on how to beat Armored Mawdad in Pikmin 3 Deluxe for the Nintendo Switch.

How to Beat Armored Mawdad Boss in Pikmin 3 Deluxe

Before you enter this boss fight area in Pikmin 3 Deluxe (you’ll know because Alph will comment on the huge hole that was left in this tree trunk, which you can see in the image down below), please make sure that you have at least 20 Rock Pikmin or so, and of course, tons of Red ones as well.

A major part of this boss fight requires you to throw Rock Pikmin at its hard exoskeleton, so then you can throw Red Pikmin to deal damage to its body.

When the fight begins, the Armored Mawdad will move around the area, and you need to start flinging those Rock Pikmin at its body until the shell breaks down. It’s worth noting that you do not have to break its entire body. You can win this by simply destroying its bottom-half and then throwing Red Pikmin to attack its soft body.

Make sure to call your Pikmin back by holding B when things get a little hairy because they can easily die if caught in an attack from the boss.

If you’re not sure how to throw your Rock Pikmin, you can press the L and R buttons to choose which Pikmin you want to throw. Use the Rock ones and then quickly switch over to the Red’s to then throw them with A.

Stay away from it when it’s charging up for a lunge by simply running away or pressing the left or right buttons on the d-pad to dodge.

Just rinse and repeat, and the boss will be down in no time. If you don’t have many Rock Pikmin for some reason, all you need to do is pick up one of those flower pellets from the field using a Rock Pikmin, and once they carry it to the Onion ship, more of them will sprout.

And that’s really all you need to know about how to beat Armored Mawdad in Pikmin 3 Deluxe. Oh, and make sure to carry its dead body back to your base so you can collect tons of extra Pikmin. Yeah, this game can get dark.

If you’re looking for even more of our Pikmin 3 Deluxe coverage, scroll down below or search Twinfinite. You can also check out our scored review right here.