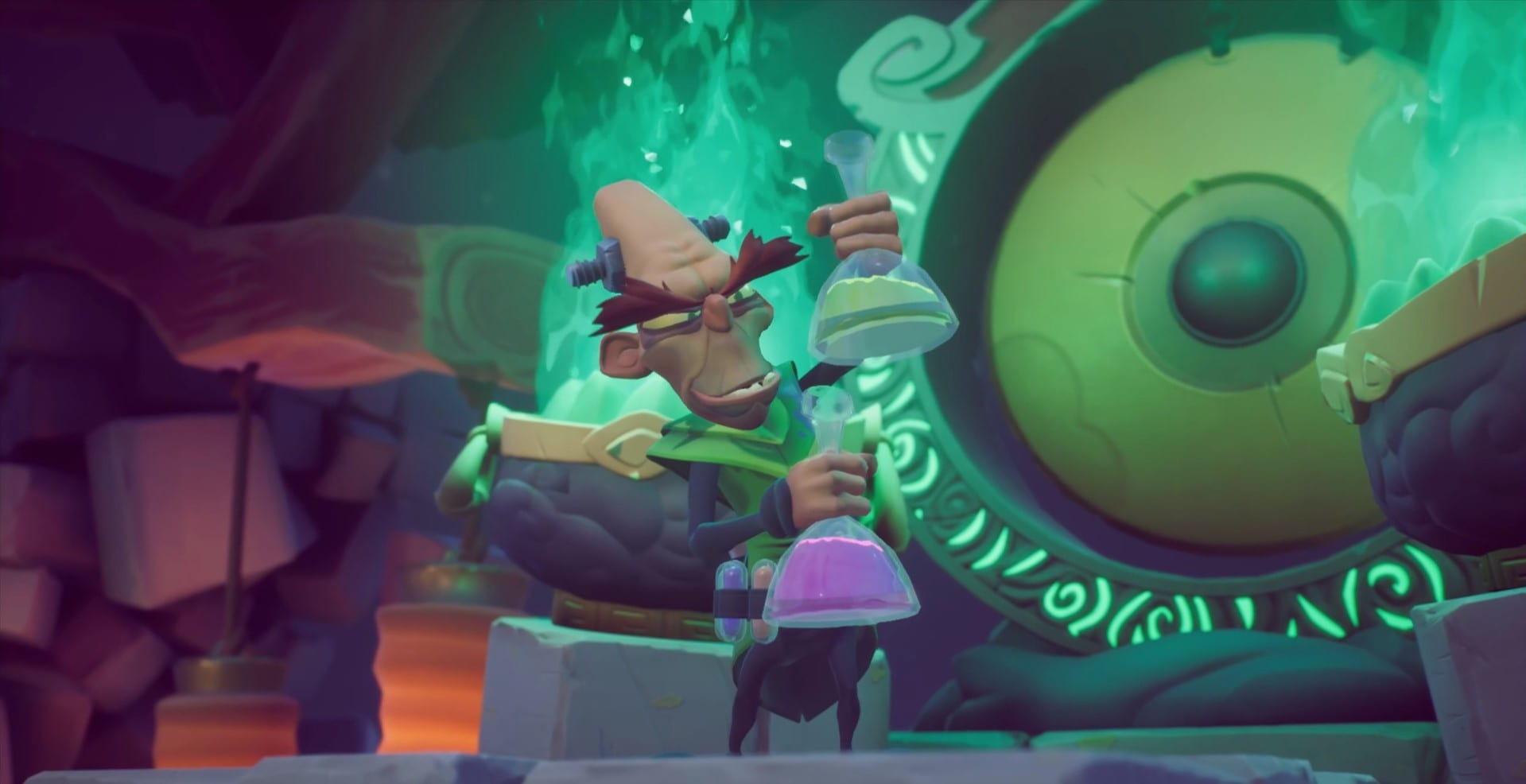 N Brio is the third boss fight you’ll take on in Crash 4: It’s About Time. It’s a relatively simple boss fight, but there are a few moments that could catch you out if you don’t know what you’re doing. Read on as we guide you through each of the four Crash 4 N Brio boss fight stages.

There are four distinct stages to the N. Brio boss fight in Crash 4. We’re going to talk you through each stage below as they’ll come at you, so you know exactly how to beat N. Brio and carry on with your quest to stop Cortex and Co. once and for all.

The first stage of this boss fight is incredibly easy. N. Brio will hurl red potions onto the floor of the stage you’re standing on. These will cause an AOE effect that ripples outwards. Avoid making contact with the red lines that expand outwards by jumping over them.

Avoid enough red potions and N. Brio will eventually throw a green potion or two out. These will cause slimes to spawn.

Use a spin attack (X on Xbox One, Square on PS4) when standing by them to send them flying back to N. Brio, dealing damage.

In the second stage of the N Brio fight, he’ll turn things a little trippy by inverting a load of colors on your screen. The mechanics of this stage otherwise remain the same, but N. Brio’s going to throw more potions at you in quicker succession this time around.

This can be particularly difficult to judge to begin with, but what you want to do is make use of Crash’s double jump and always aim for where the potion has just landed, once the red shockwave has began spreading out.

Avoid all six-eight red potions that N. Brio throws out during this stage and he’ll toss out another few green potions. Spin attack the slimes back at him and then prepared for the third and fourth stages.

The Crash 4 N Brio boss fight’s third and fourth stages are more or less the same. Rather than throwing potions at Crash, N. Brio chugs a potion and becomes a big frankenstein x The Hulk mash-up.

In the third stage, N. Brio will chase Crash around the stage, slamming his fists in the ground. This causes little shockwaves to appear, just as the red potions did in stages one and two.

All you need to do is keep your distance from N. Brio until he stuns himself. You’ll know he’s done this as Wumpa Fruit will appear and circle around his head. Run over to him and press Y/ Triangle or RT/ R2 to use Akano’s Dark Matter spin. Keep bumping into N. Brio while using this spin until you’ve knocked him off the stage.

Do this a second time and you’ll trigger N. Brio’s fourth and final stage.

The fourth stage is almost the exact same as stage three, except the screen goes all trippy again and N. Brio’s fist slams are faster and more frequent.

That’s everything you need to know to beat the Crash 4 N Brio boss fight. For more tips, tricks, search for Twinfinite or check out more of our coverage on the game below.