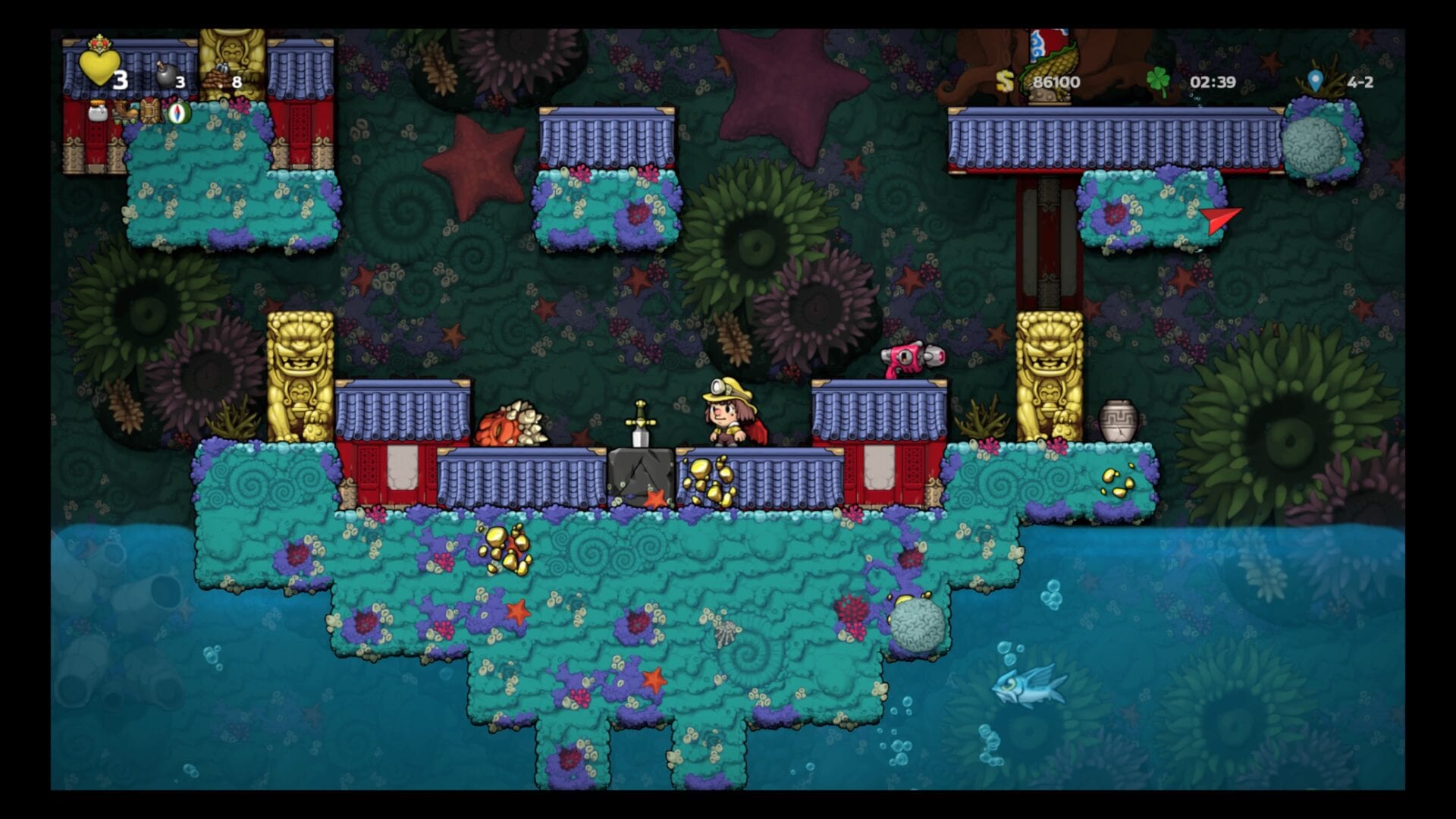 Spelunky 2 carries over plenty of elements from the first game, not least of which being that it contains a multitude of secret items it has no intention of telling you how to get or why you need them. Case in point: The Excalibur, a mythical sword embedded in a block of stone which you’ve likely been unable to get, let alone use. That’s why we’re here to help with a guide on how to get Excalibur and what it does in Spelunky 2.

How to Get Excalibur and What it Does in Spelunky 2

To get Excalibur in Spelunky 2, you’ll first need to obtain a few select items in the game.

First, you’ll need to get your hands on the Udjat Eye. You can do so by picking up a Gold Key found in the opening Levels of the game and bringing it to a Golden Chest found in a Cave Person Dwelling with two ladders in the same level.

Their location is randomized each run, so keep an eye out for one if you spot the other.

One is the Egyptian Hedjet, found in the lower-right corner of the Black Market found in the Jungle Zone. It’ll run you $40,000 to get, but you won’t have to worry about dealing with any enemies guarding it.

The other is the Crown found in the Vampire Castle. It can be found free of charge at the top of the area. However, it’ll be guarded by the Vlad the Vampire, who will hunt you relentlessly through the Castle until he’s killed; which, thanks to his teleportation ability and high damage dealing potential, is no easy feat.

Reaching and getting either one can be a bit of a process, as reaching either of the secret areas they’re in requires fulfilling some additional requirements and having certain supplies on hand.

Likewise, you can only obtain one of the signs of royalty per run, so your choice will also impact which levels you’ll have to play through to reach Excalibur.

Luckily, we have guides to walk you through how to access both of them and make the process more manageable. You can go here for the Black Market and here for the Vampire Castle.

Once you have the necessary items, all you need to do is play through the game normally until you reach Level 4-2. Then, make your way down to the lower center of the level and look for a small platform above a pool of water.

Excalibur will be in a stone block. Walk over to it, and you’ll be able to pull it out and equip it as your weapon.

Where You Should Use Excalibur

As for how you should use Excalibur once you have it in Spelunky 2, it depends on what run you’re looking to complete.

If you’re looking to complete a standard run of the game, then Excalibur will serve you well. It acts as a one-hit-kill melee weapon and can defeat most anything from Yetis and Mech-equipped Aliens to the final boss of the game.

On the other hand, if you’re out to unlock secrets, then the Excalibur can still be vital.

Hopefully this cleared up how to get Excalibur and what it does in Spelunky 2. For more on the game, check out our guides on other hot topics like how to get the Kapala and how to get an Axolotl.