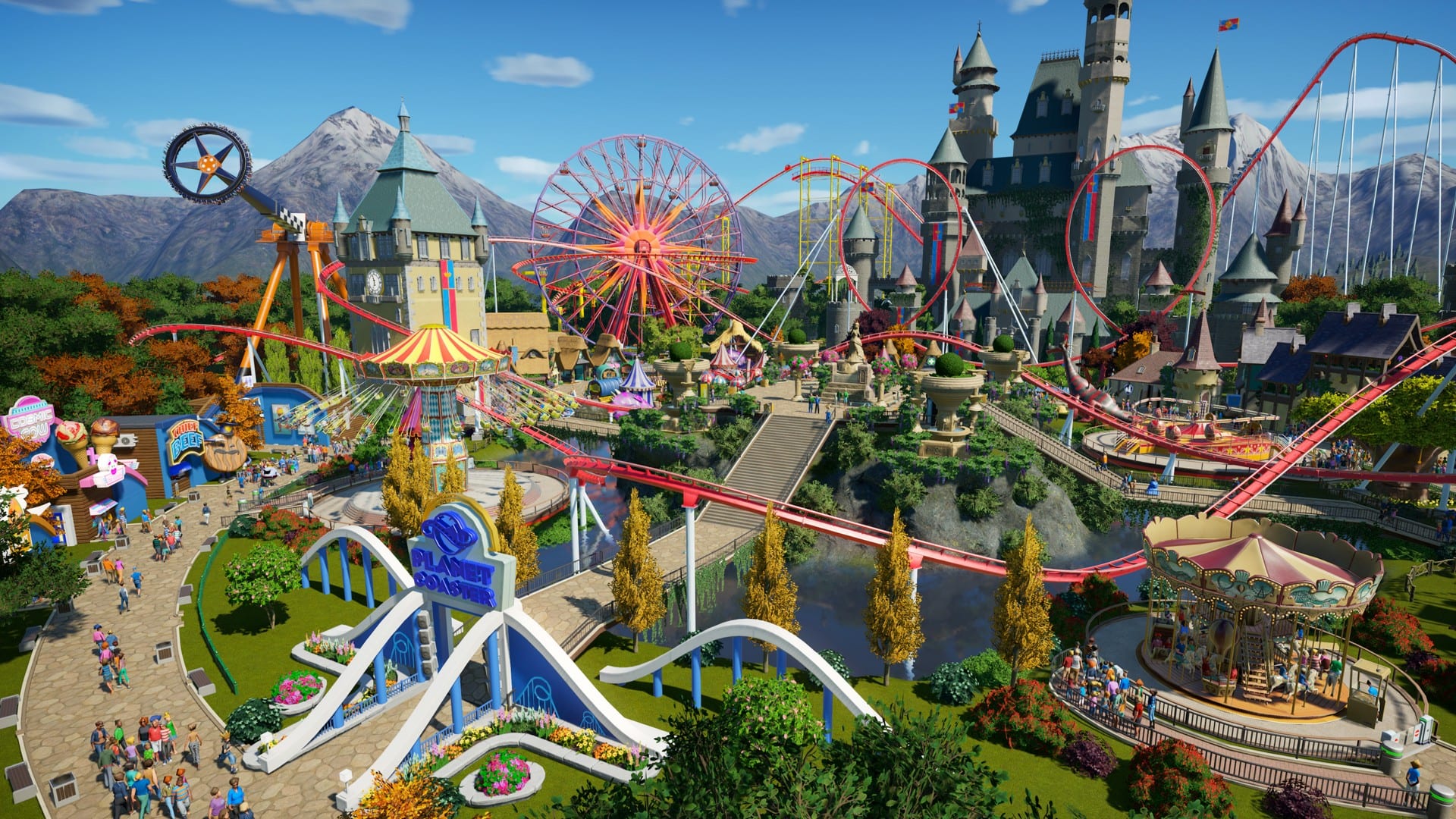 Many of us at Twinfinite are big fans of Planet Coaster. In fact, some of the earliest game experiences on PC for myself and also for Twinfinite site publisher Yami were spent creating very just OK theme parks in Roller Coaster Tycoon and then finding out how exploit our patrons for every penny they had.

Theme park management games have come a long way since then though and just as much attention is now on providing as much tools as possible to creative players (unlike myself and Yami) to build beautiful theme parks and share their work with the world.

Planet Coaster is among the best of the best in that regard, and recently Twinfinite got to speak with Gary Richards, game director of Planet Coaster Console Edition and Andy Fletcher, its lead designer, about the upcoming console port of the game.

Theme park management games don’t always make the jump over to console, so I wanted to get a feel for what potential players could expect when it releases later this year. Here’s what I was able to learn.

Ed McGlone, Twinfinite: Theme Park games have had an up and down history on consoles, with some solid franchises never feeling confident going all-in. Did that history have any impact on your decision-making process while considering and developing Planet Coaster Console Edition?

Gary Richards, Game Director of Planet Coaster Console Edition: With the announcement of next-gen later this year, it felt like that was an ideal opportunity to do a simultaneous release on Xbox and PlayStation at the same time.

Andy Fletcher, Lead Designer of Planet Coaster Console Edition: We did Jurassic World Evolution after the original Planet Coaster, and we did that simultaneously on PC and console and the success that gave us a lot of faith in the appetite for management games on consoles.

Since we announced Planet Coaster Console Edition there has been a fantastic reception. I think people are really hungry for it. Our experiences playing it during development at home on our sofas has been really positive. It’s a nice time for it because it’s really a quite relaxing game experience.

Richards: It’s something a bit different, as Andy said it’s quite relaxing with the current working from home environments that we’re all in. I’ve been able to take my dev kit out of my office and plug into my TV and living room and sofa and actually lay on the sofa with my gamepad and play Planet Coaster in an environment where we expect players to be able to play.

I do get some strange looks from my wife sometimes who says: “shouldn’t you be at work” and it’s like, this is work! And yeah, it’s a nice relaxing experience which is a change from some of the other games you usually get on console.

Ed: What is the biggest adjustment that players going from PC to console will need to be aware of if anything?

Fletcher: The biggest change surely is the controller interface. It’s worth bearing in mind that you can plug in a compatible keyboard and mouse as well for both PlayStation and Xbox. You can plug those in and they work just fine with the new UI.

But if you’re playing on gamepad then, of course, all of the interface has changed to be appropriate for controlle usage. So park management is now a full-screen interface, and you have various systems emulate certain systems in the original.

So we got a radial menu that emulates some of the keyboard shortcuts from the original game. We tried to build in new systems that are consistent across the different toolsets. If you jump between park building and coaster building you’ll notice common elements such as an always active settings panel.

Richards: If you are familiar with the PC version then there will be a lot of familiar features within Planet Coaster Console Edition. It’s more than just a port. It’s a game in its own right.

The features that you know and love from the PC have all been optimized and then we’ve added, as Andy said, a new tutorial, and hundreds of new blueprints as well. The depth and complexity of Planet Coaster is still there. If you want to deep-dive in and build your piece by piece construction then you can do that.

But equally, for new time console players that may only have a couple of hours to play rather than days and days working on a park, you can quickly build something that looks really beautiful because our art department has created hundreds of new blueprints.

If you want fairy tale shops or pirate scenery, all those things are there. You can select them from the browser, plop them down, and quickly build an amazing looking park.

Andy: Yeah we’ve brought that to the forefront. So now if you navigate the browser and you go to shops, you’ll see a selection of pre-built shops that are made up of these hundreds of new blueprints and create custom options are a layer down.

Whereas in the PC version if you go to shops browser it’s pieces of shops. So yeah, we tried to present those new blueprints in a way that makes sense for a brand new game on console.

Ed: Are there any differences between the PlayStation and Xbox versions in terms of what you can and cannot share?

So to do that, we added the frontier workshop where people will be able to create and share content with other players. And then equally be able to maybe create their own following.

Ed: Is there anything you feel that PC players that pick up and play Planet Coaster Console Edition with a controller might actually enjoy over playing with a mouse and keyboard?

Richards: What I really like is the new path-building system. IT system works well on a gamepad, particularly, as Andrew said, this always active menu to the side.

So if you want to change what your paths look like or the length, or the width, you don’t have to move away from the area that you’re building in. You use the analog sticks to control what you’re building and you use the d-pad to navigate around this always focused menu.

And I think ride placement as well…

Fletcher: We’ve streamlined the flow so when you place down a ride it will kind of automatically take you through some of the steps of adding an entrance/exit gate, queue path, and exit path. So that has a nicer flow to it.

So kind of little things. I wouldn’t sort of compare it to closer to the PC game. It’s more each of these things feel cohesive in their own right. I like coaster building on gamepad for example. It’s not that it’s better than PC, it’s just that it feels right everything feels like it’s at your fingertips.

Twinfinite will be following Planet Coaster Console Edition closely as it marches towards its release on PS4, PS5, Xbox One, and Xbox Series X.