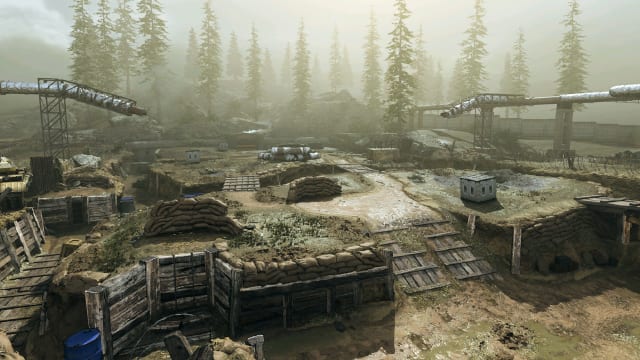 Call of Duty loves to hide fun little easter eggs in its maps. A tradition usually kept for the Zombies mode has infiltrated its way into multiplayer maps. Here’s how to open the bunker on the Modern Warfare Trench map to see the easter egg.

How to Open Bunker in Modern Warfare Trench

The easiest place to do this is in a private match so you don’t have to worry about the match ending or other players constantly killing you. Considering Trench is a 2v2 Gunfight map, it’s nearly impossible to do it any other way.

The code is scattered around the map, so let’s walk through each step of the code. The code is randomly generated so we can’t simply post the code here, you’ll have to locate it yourself.

If you have your back to the door of the bunker, go right and hop over some rubble in the trench. Then turn and look on the left wall of the trench to find the first digit.

You only have to worry about the first number in any set when looking to see the Trench easter egg, so for instance the six is the only thing here pertaining to the bunker code.

From here go back towards the bunker and follow along the trench. You’ll see another number left of the bunker on the trench facing opposite you.

Now go directly across the map towards the blue house in the distance. You won’t be able to make it to the house, but at the far edge of the map, you’ll see a box, peek inside to find the third digit.

Now you have the third digit, it’s time to get the fourth. Instead of going through the trenches this time, head on top of them and go east. You’ll see a large cement barricade on the right-hand side if you’re going back towards the bunker.

Look around the sides of it to find the next digit.

Only one more number to go until you can see the Trench easter egg. You can see in the image above two wooden bridges going over the trenches below. You’ll want to head to the farther wooden bridge and take a peek under it for the last digit.

Now that you have your code, it’s time to head back to the bunker and take a look at the keypad I mentioned earlier. You’ll need to shoot the keypad with the digits you obtained in the same order.

If you’ve done it correctly, the bunker will open and you’ll be able to explore it. I won’t spoil what’s down there but it definitely put a smile on my face.

Well, that’s everything you need to know about how to open the bunker in Modern Warfare to see the easter egg. For more tips, tricks, and guides, be sure to check out our growing and ever-expanding Wiki.