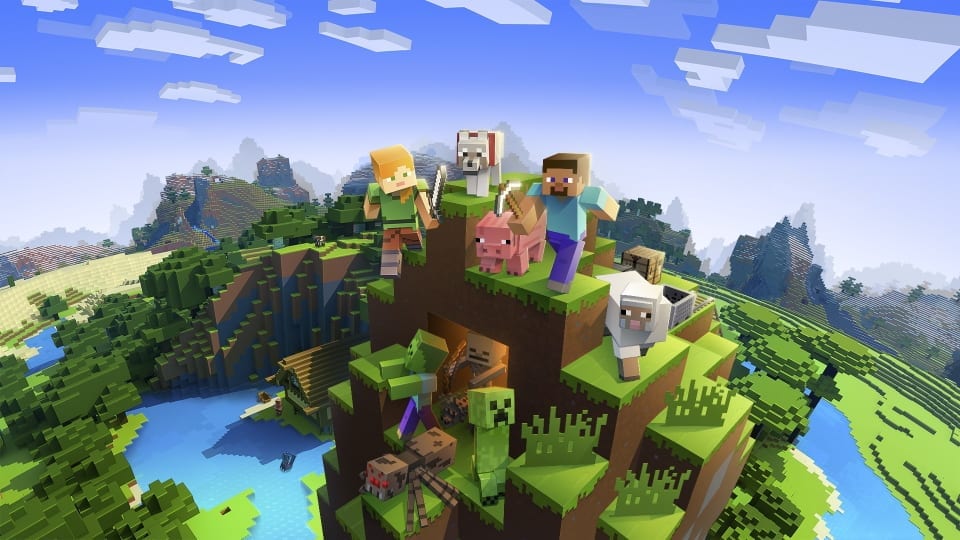 If you want to explore a land that’s reiniscent of the lost city of Atlantis, then you need to try seed. The land isn’t much to look at, but there are a few towering icebergs to climb and explore, a couple of big docks, and a decent shelter on the land as well. But it’s not what’s on land that makes this one of the best Minecraft seeds for 1.15.2

The underwater ruins are where this seed truly becomes its best self. It feels like you’re exploring a lost city that was swallowed up by the sea. The seafloor is spattered with treasure chests and there’s even a half-sunken ship for you to explore.

This Minecraft seed offers some extremely varied biomes all wrapped up in one easily digestible package. Whether you’re looking for lush plains filled with greenery or the more muted tones of beige and brown that you would find in a desert, then the Seven Villages seed has you covered.

As the name would suggest, there are seven villages throughout this land that you can find and explore. They give away some coordinates in the description, but there are plenty of other villages and temples to discover here.

If you want to try out a seed that is incredibly expansive beneath the surface, then you gotta check this one out. You’ll spawn in a village that will have everything you need to start your journey deep into the endless mineshaft.

Under the ground, you can do whatever your mind can conceive. If you just want to set up a mining operation, then that’s fine. But you can set up underground transportation, a secret evil lair, or even an underground maze with all kinds of contraptions and challenges.

This is another one of those Minecraft seeds that looks boring on the surface but it becomes one of the best out there once you dig deeper. Island with Abyss features a tiny island with minimal defining features and flat land for building.

As soon as you venture beyond the island’s shore, you’ll find an abundance of useful ores. It’s almost like getting stranded on a tiny island and trying to rebuild from nothing. There’s also a large underwater shipwreck for you to explore and plunder for resources.

This beautiful seed has a large sprawling prairie for creative types who want to let their imaginations run wild. With plenty of flat landscape, it one of the best seeds for even unexperienced builders to make some impressive structures.

Also, if you’re really into smithing, then this seed is one that you’ll want to check out. With two different forges in a single village, you can cut down the travel time by just going to whichever one is closer to you at the time.

If a Pillager Outpost isn’t enough for you, then how about an entire Outpost that has merged with a mansion? That should certainly provide enough of a challenge for you more hardcore Minecraft players who are into combat.

This Outpost has merged halfway into the mansion and now an enemy mob could be hiding around any turn. You won’t be able to drop your guard for a single moment, or else you just might not make it out of this Outpost Mansion alive.

There’s just something magical about exploring shipwrecks, but I promise this is the last seed on the list to feature one. This seed is also home to a Pillager Outpost that’s protecting an iron golem. Of course, they suggest freeing it to let you easily plunder the Outpost.

The shipwreck portion of the seed is located just across a short stretch of water from the Outpost. There’s also a small channel of water that runs through the middle of the ship. Fortunately, enough of the wreck is above ground to be able to scout out the location of the Outpost.

Plain with an Abandoned Village

This seed is a fun little one that’s mostly calm and peaceful. Just clear out some zombies and you’ll have an entire abandoned village to yourself. Set up camp in a single shelter, or connect them with tunnels to make one giant home across this expansive plain.

Despite this seed technically being a plain, there are still multiple elevation changes. However, the elevation changes are slight enough to still allow for fairly simplistic building. But if you have the creative mind to build on slopes, then this will be an incredibly fun seed for you.

Mansion in the Forest

Well, this mansion is markedly different than the one that merged with an Outpost. The absolutely massive mansion is tucked away in a lush forest. Despite the size of the structure, it can actually be somewhat difficult to find.

As they describe it, “The spawn point is quite far from the mansion…” You could look up the coordinates on the description page, or you could just explore on your own and find the mansion. Either way, you’re sure to have a great time with this seed.

This is one of the best Minecraft seeds out there when it comes to pure exploration and creative options. The two villages near the spawn point are just the beginning of what you can find here. One of them even has two forges, which will enable you to create tools for exploring this seed even faster.

If you continue searching beyond the first two villages you find, then you’ll discover even more little towns all across this world. There are plenty of flat areas for building shelters and tall mountains to explore as well. This seed has it all.