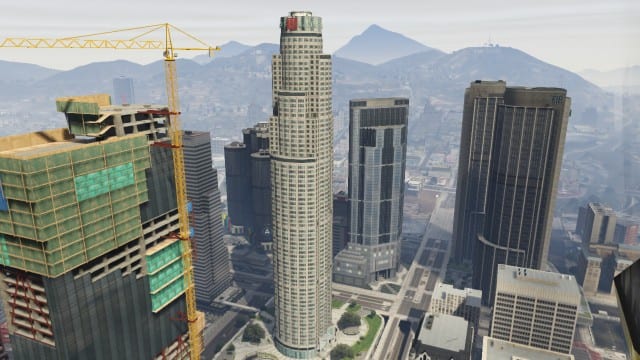 Right at the heart of Los Santos’ business district is the Maze Tower, the tallest building in both GTA V and GTA Online. It serves as a location for only one mission in the game, but it’s obviously a pretty sweet place to admire the cityscape or have a bit of fun jumping off. But getting up there is a trick all by itself. Here’s how to get to the top of the Maze Tower in GTA V.

Getting to Top of Maze Tower in GTA V

There are several different ways to reach the top of Maze Tower, and in typical GTA style most require a bit of finagling to achieve. If you’re thinking along the lines of grand theft aero, then you’re on the right track!

Yes, the easiest way to get to the top of Maze Tower is by stealing a helicopter, airplane, or blimp. Below we’ll list locations for all three in case you’ve not come across any during your free-roaming of the city.

There is typically a helipad logo on your mini-map of Los Santos, and if that’s the case then head there and steal it.

Otherwise, you can search at the following locations, but just remember that whether or not one has spawned there is entirely random:

Note that if you’re stealing a police helicopter you’ll immediately gain a wanted level. Since you’ll then be pursued by the police, it will make landing the helicopter tricky, and if you crash the helicopter, you won’t be able to continue the story mission.

Of course, you can purchase a helipad for $419,850 as Franklin or Michael (Trevor has his own already), and then purchase helicopters from the game’s store.

Plane – Getting to Top of Maze Tower in GTA V

Stealing a plane in GTA V and GTA Online is pretty much as simple as gaining access to Los Santos International Airport. Gaining access to the airport shouldn’t be too tricky, but just remember that once inside your wanted level will shoot up to three stars. So make sure you’re ready to make a quick getaway.

Inside the airport, you’ll find both passenger planes and private planes to steal.

If you’re feeling more daring, you can also find and steal military aircraft from Fort Zancudo. Like at the international airport, the trick is to get in and steal the aircraft as quickly as possible before the authorities take you out. You’ll also have to contend with air defenses once airborne.

Regardless of how you choose to obtain an airplane, once you have one you’ll need to fly it directly over the Maze Tower and then jump out and parachute down to the top.

If you’re wondering how to get a parachute, in GTA V’s single-player it unlocks at Ammunation after you complete the mission Minor Turbulence, while GTA Online players will get one after reaching level 11. There’s no need to worry about equipping it as it’ll automatically do so after you jump off any tall building/ledge. Just press square to deploy (PS4) or X (Xbox One).

The Atomic Blimp is another method of soaring high enough to reach the top of the Maze Tower. Playing as Franklin, players can order one via an in-game app that becomes available after completing his intermission.

After you call the Blimp, a black icon will appear on your mini-map; you’ll either be picked up from Vinewood Racetrack or Los Santos International Airport. You should be able to land on the tower, or you could parachute. If you’re attempting the former, just be careful about damaging the blimp given how fragile it is.

That wraps up all the best methods we’ve found to get to the top of the Maze Tower in GTA V. For more useful tips and guides on the game, Twinfinite has written plenty over the past eight years, so use our search function!