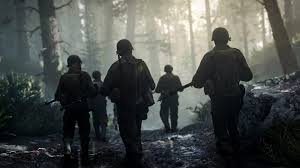 Call of Duty: WWII has been out for a few years now but it has recently been made one of the free games that are available for PlayStation Plus members. However, if you’re here, you’re probably wondering if you can play with people on other systems. So that you know before starting the download, here’s everything you need to know about whether CoD WW2 is cross platform.

Activision has recently become one of the leaders in offering cross platform play on their games. 2019’s Modern Warfare and this year’s Warzone battle royale mode both allow PC, PS4, and Xbox One players to play together if they want to, which makes matchmaking smoother and reduces wait times.

However, the bad news is that Modern Warfare is the first and only mainline Call of Duty game that is cross platform. It is likely that future games will support crossplay, but none of the games that came before do so.

Therefore, CoD WW2 is not cross platform at the time of writing. Activision haven’t commented on the possibility of it happening, recently or at the launch of the game – mostly due to it not being a big topic of conversation in 2017.

Also, it is unlikely that they ever add cross platform play to CoD WW2 any time soon, or ever for that matter, because their focus will probably be on any upcoming releases.

Even any player base boost that PlayStation Plus members will bring in June 2020 will probably not bring enough attention for it to be worthwhile to add cross platform play. Of course, if we’re wrong and it’s added as part of a future update, we’ll be sure to update you here.

That’s everything you need to know about whether CoD WW2 is cross platform. For more tips and tricks on the game, be sure to search for Twinfinite.