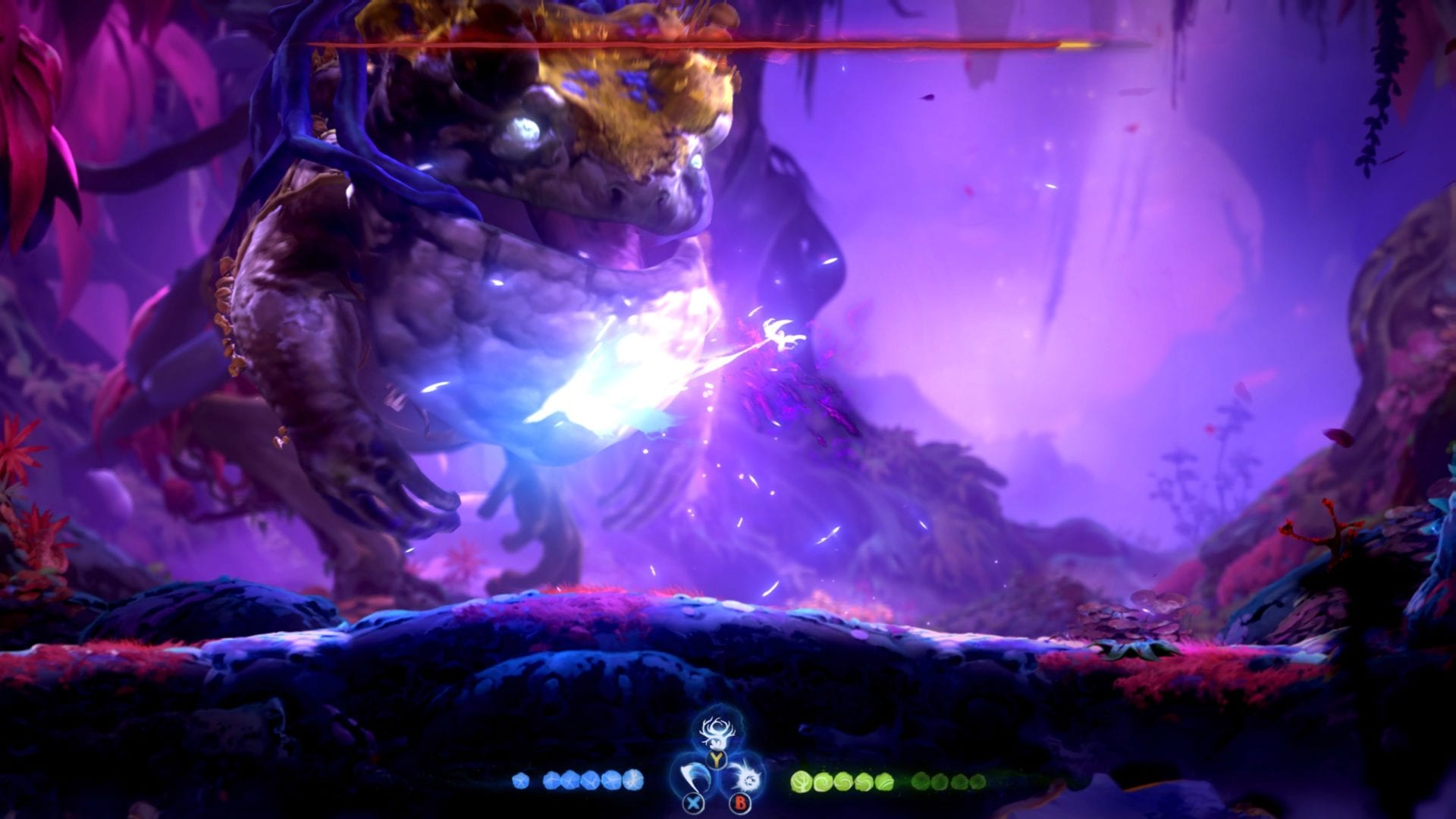 We’re gonna hazard a guess and say that you’ve arrived at this guide because Kwolok the giant toad… frog thing has made you want to pull your hair out. The Kwolok boss fight is the second hardest you’ll come across in Ori and the Will of the Wisps, and we’ve felt your pain. Fortunately, we did find a method that should help you topple the toad once and for all.

Let’s get one thing straight. This is possibly the most infuriating boss battle in Ori and the Will of the Wisps. That’s because halfway through the fight, you’ll no longer have anywhere to stand, rendering your Regenerate ability useless, preventing you from healing.

In the first phase of the fight, you’ll find yourself in an arena with a floor and two walls that you can climb up and will absolutely want to as it’ll give you a handy advantage.

Kwolok will focus on using its dark possessed hands to swat you off walls and off the ground. It can also summon dark hands to appear out of the ground or walls, so basically, always keep moving.

It’ll also use a projectile attack it’ll fire out of its mouth, so it’s easy enough to forecast it coming. When it does, use your sling ability to fire it back at Kwolok and deal damage.

When it isn’t eating its own projectiles, you’ll want to use your Light Burst attack and spam this as much as you can. Use the energy crystal on the floor to keep topping it up whenever it regenerates, and use either the ground or a slight nook on the right side of the arena just below the thorns to use Regenerate to heal up. It’s harder for Kwolok to hit you here, though we’re not entirely sure if we’re technically supposed to be allowed to stand in place here.

Kwolok will also try and use a ground pound attack that then ripples across the floor. Your best bet to deal damage quickly here is to use your Light Burst attack from the wall. Jump off the wall, fire a projectile or get in a few melee attacks, before dashing back to the safety of the wall. This will help you avoid Kwolok’s arms, and will ensure you’re not clinging to the wall in one place long enough for him to summon the dark hands to hit you.

Get Kwolok down to half health and this is when the really tough part of the fight begins. Kwolok floods the arena, and now has a missile attack, as well as his normal projectile. Oh, and he also has a black ink-like attack that’ll linger in the water for a while after the initial shot, so keep an eye out for it and don’t go back into it.

Kwolok will also do a rock fall attack in phase 2, where boulders will fall from the ceiling. To avoid this one, go to either of the walls and cling to it, the rocks won’t hit you here.

Finally, Kwolok can use one of his dark tentacles when you’re in the water to block you from escaping, and then will try and suck you into his mouth as he dives into the water. You’ll want to water dash away from him if you get caught in it, or try and get above the tentacle if you’ve got the time.

Our best strategy for phase 2 of the Kwolok boss fight in Ori and the Will of the Wisps was to start doing a U-shape around and underneath Kwolok.

Dive down, get the energy crystal on the floor and then water dash up and out of the water onto one of the walls on either side.

Use your Light Burst attack and keep dashing back towards the wall and jumping again to avoid any incoming attacks. Don’t get greedy. Once you’re out of energy, only try and get 2-3 slashes with your melee attack in on Kwolok each time you jump from the wall. Trying to get any more will see him swipe you or hit you with his tongue. With health such a rare commodity in this phase, conserving your own health is your priority here as opposed to dealing damage at a fast rate.

With a few hits in, return to the wall and dive under the water. Use the water dash to speed underneath Kwolok and up onto the wall on the other side. Keep an eye on the energy crystal and grab it whenever you can on this trip, as the Light Burst attack deals hefty damage to Kwolok.

Other than that, it’s unfortunately just a case of rinse and repeating until it goes down.

There you have how to beat Kwolok in Ori and the Will of the Wisps. For more on the game, be sure to search for Twinfinite, or check out more of our articles down below.