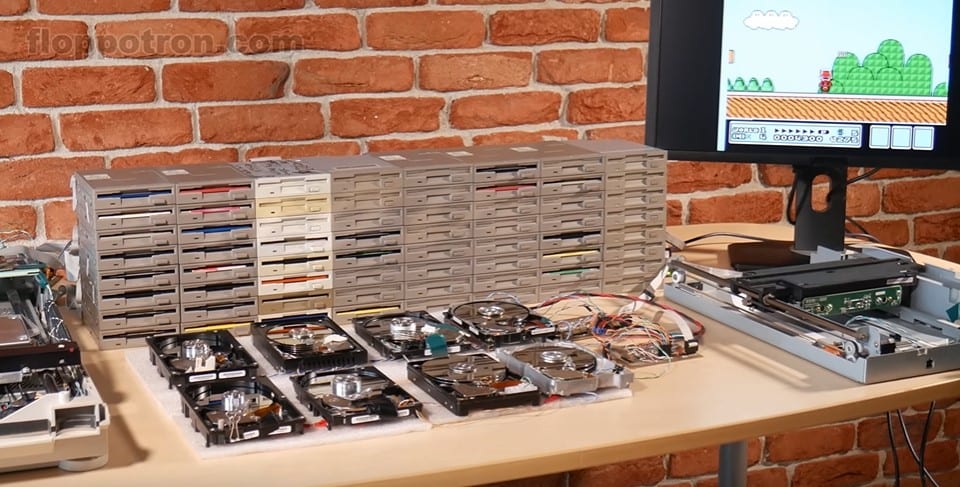 Every March 10 the gaming world comes together for MAR10 Day to celebrate everyone’s favorite mustachioed plumber, Mario. No YouTube channel puts a spin on the classic Mario music for MAR10 Day quite like Floppotron and Paweł Zadrożniak.

For those who don’t recognize the channel, you may be more familiar with the name Floppotron. It’s the internet-famous orchestra of old floppy drives, hard drives and dot matrix printers clicking and clacking their little mechanical hearts out to the tune of numerous popular songs.

Usually, you’ll hear this feat of ancient technology playing pop songs from all different generations. However, Floppotron also has a knack for putting out some impressive video game music covers.

To celebrate MAR10 Day, Paweł Zadrożniak released a new Floppotron video featuring the assembly of old PC parts and accessories playing a medley of Mario Bros. overworld themes. If you’ve never listened to a Floppotron cover before, then you need to make this your first one.

The assortment of Mario tracks starts with the overworld theme for the 1990 classic Super Mario World. From there it transitions into the Super Mario Bros. 3 overworld theme and it continues to go down the list until it finally reaches the most recognizable video game song of all time.

It’s hardly the first time that the Floppotron has rocked out some classic video game tunes, but each time is always just as impressive as the last. You can see the full YouTube video from Paweł Zadrożniak below.

Don’t forget to check out more of our MAR10 Day coverage like this announcement of the upcoming Super Mario Bros. and Lego collaboration.

If you’re interested in check out more video game covers from Paweł Zadrożniak and Floppotron, then take listen to these: