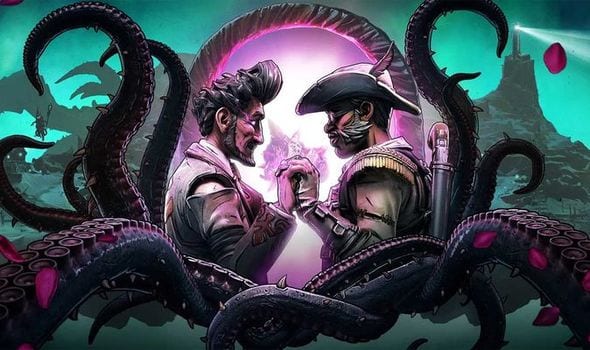 As it turns out, not every Borderlands 3 legendary comes out of the body of a defeated foe. Sometimes, in this case in the DLC, they are given as mission rewards. You are denied the satisfaction of hearing the loud ting and seeing the orange beam pop, but it is handed right to you, no randomization. This is one such case. Here’s how to get the Seventh Sense Legendary Pistol in Borderlands 3 Guns, Love & Tentacles, including stats and perks.

How to Get the Seventh Sense Legendary Pistol in Borderlands 3 Guns, Love & Tentacles

In the DLC as part of the main quest you meet Burton Briggs in Cursehaven. Once he has helped and you have moved on you can return to Cursehaven and begin a series of his quests under the banner Cold Case.

The third in the series, Cold Case: Restless Memories, you start in The Cankerwood. Follow this quest to the end to receive the Seventh Sense as a reward. There’s no trickery, you only need to finish all three of his quests, you don’t have to wait between them, he says where to meet him to begin the next quest at the end of the other two.

You use a version of this during the second quest, Cold Case: Restless Memories, though it lacks the special ability.

As with some of the other legendary weapons in the DLC, the item card tells you what the gun does. For the Seventh Sense, shooting an enemy spawns wisps that fly around and then upon reload they all shoot into the enemy from the air around them, doing high damage. The Seventh Sense is also unusual for a Jakobs, as it does elemental damage.

For a slightier easier read for how to get the Seventh Sense Legendary Pistol in Borderlands 3 Guns, Love & Tentacles:

There you have it, exactly what you need to know for how to get the Seventh Sense Legendary Pistol in Borderlands 3 Guns, Love & Tentacles.

For more guides on legendary weapons and how to get your hands on them, check out Twinfinite’s Borderlands 3 Guide Wiki and keep an eye on it for more incoming legendary guides.

GTA Online: How to Get Ammo Drop
PlayStation Store Free Games for Week of May 26 (DLC, Themes & More)
Maneater: How to Get Shadow Evolution