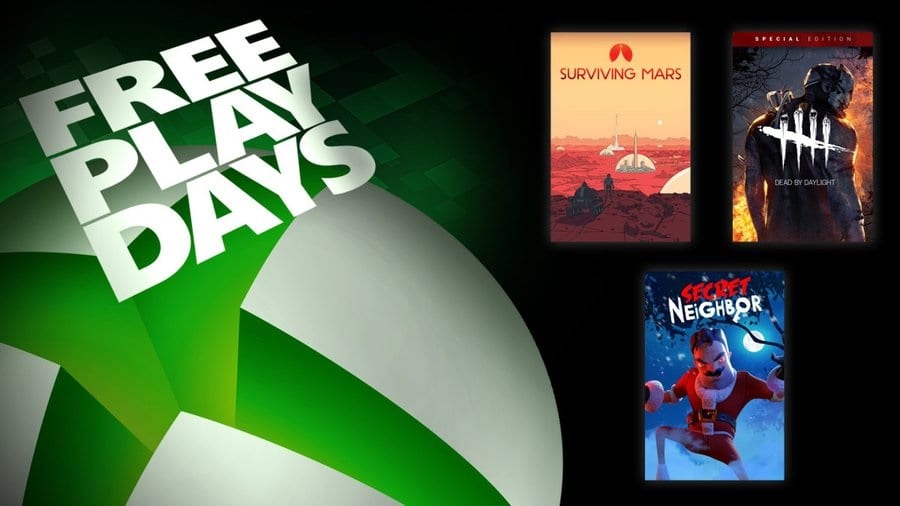 Welcome to another weekend of getting to play select Xbox One games as part of Free Play Days available to Xbox Live/Ultimate subscribers. Up on offer is Surviving Mars, Dead by Daylight, and Secret Neighbor. The games are available to play for free and are discounted in the store until Feb. 7.

Surviving Mars is a city management/creation simulator set on the harsh landscape of Mars. The goal is to create habitable colonies to be able to, you guessed it, survive Mars. Armed with the tools to not only make Mars survivable, you must also take into account the colonists and build a place they would actually want to live to entice the right candidates. The game is currently on sale for 50% at $15.00.

Dead by Daylight is an asymmetrical multiplayer game wrapped around team-based survival horror. The game features 4v1 matches where four players must work out how to access the exit while the one player, controlling a hideous killer monster, must find and stop them before they can. Dead by Daylight has has quite a bit of crossover with popular properties. Freddy Kruger from the Nightmare on Elm Street movies and Michael Myers from the Halloween series are a couple notable additions. Dead by Daylight is also 50% off at $15.00.

Secret Neighbor is a spin-off of the Hello Neighbor games. Secret Neighbor is similar to Dead by Daylight except the monster (or neighbor, in this case) is hidden in plain sight. The possible party is made up of 4-6 players playing kids that sneak into the titular neighbor’s house to locate their missing/kidnapped friend. The twist is one of the players is secretly the neighbor in disguise who must stop the kids before they can collect the keys and get into the basement. Secret Neighbor is 20% off at $15.99

As always, be sure to check back with Twinfinite for updates on future games during Free Play Days.