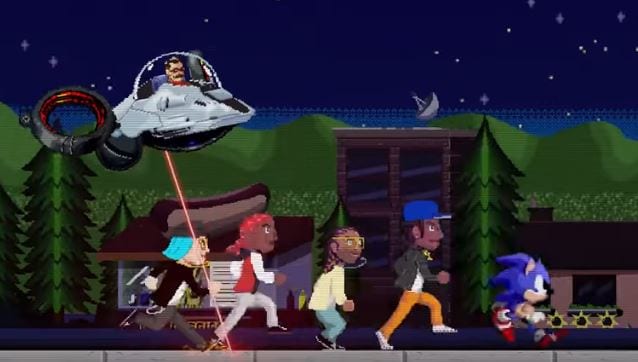 The Sonic the Hedgehog movie comes out in less than a month, and Wiz Khalifa made like Eminem and surprise-dropped a music video appropriately titled “Speed Me Up.”

The music video opens up with Wiz Khalifa blowing into the Sonic the Hedgehog cartridge — which is standard procedure for playing games on the Super Nintendo, SEGA Genesis and the ilk — and plops down on the couch in a dark room to play the game as he raps about his fast-paced, successful life in the rap game.

Wiz Khalifa is then transported into Sonic’s world, where they and rappers Ty Dolla Sign, Lil Yachty and Sueco team up and do pretty much everything Sonic has done in the movie, like read comic books, play baseball, go clubbing at a Western bar, and defeat Dr. Eggman, who appears as a pixelated Jim Carrey instead of his classic fat, jolly self.

Everyone thought that if anyone could make music for the Sonic the Hedgehog movie, it would be either Crush 40 or another rock artist since rock or pop-rock suits Sonic’s personality more. Rap doesn’t normally mix with the Blue Blur, but Wiz Khalifa made it fit with “Speed Me Up” because it’s trap music, which is a delightful witch’s brew of hip-hop and dubstep.

The music video itself takes you on an acid trip down memory lane, mixing elements from both the classic Sonic games, like running through the special stages from Sonic 2, and the movie that it ties in with.

There are some things in the music video that don’t make sense, like why there’s a pixelated Jim Carrey instead of the regular Dr. Eggman we know and love and hate, but music videos like this don’t have to make as much sense as Impressionist paintings. Besides, it’s fun to see Wiz Khalifa and his friends running and rolling around with Sonic at the speed of sound.

You can check out the “Speed Me Up” music video below.