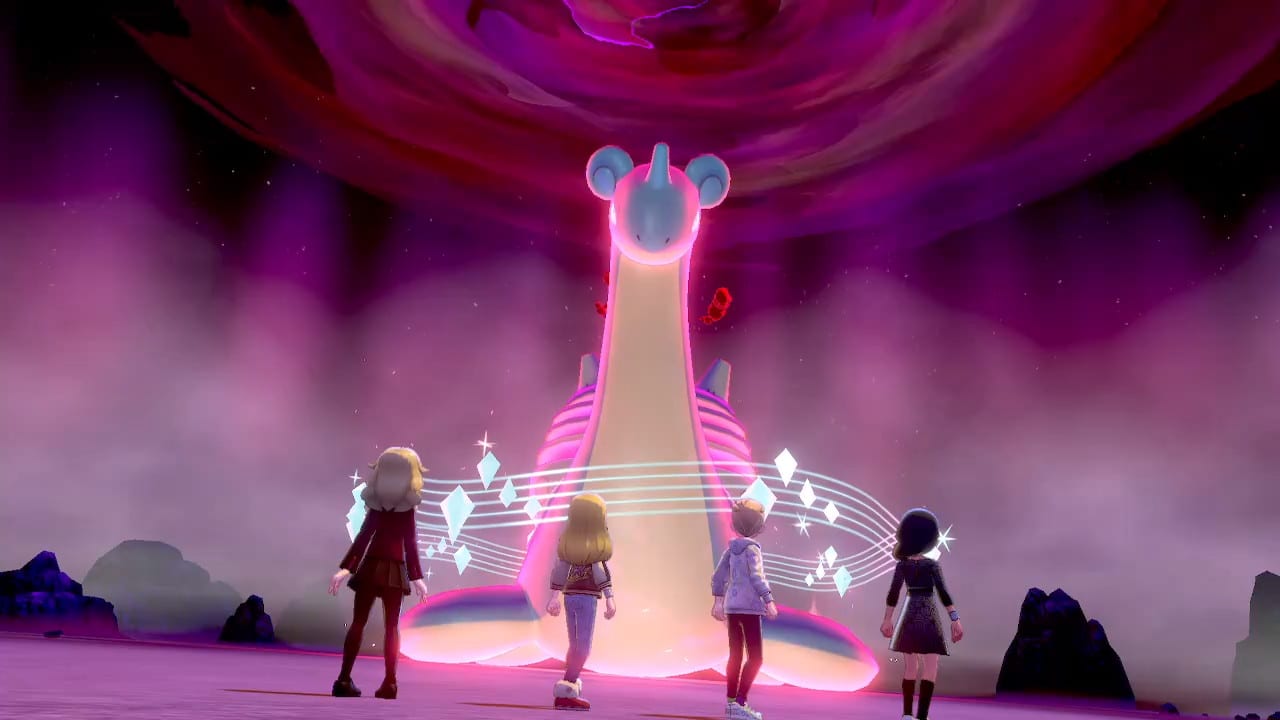 Only a few Pokemon have the ability to Dynamax into a special Gigantamax form, which changes their appearance, and Lapras is highly sought after due to its popular design. Gigantamax Lapras is exclusive to Pokemon Shield. If you’re playing Pokemon Sword, you can still get Lapras, but the method of obtaining it is different. We will show you how to find and beat Gigantamax Lapras in both Pokemon Sword and Shield.

How to Find Gigantamax Lapras in Pokemon Shield

All Gigantamax Pokemon have a chance of appearing in rare dens in the Wild Area. These dens have a beam of purple swirling light coming out of them.

If you’re playing Pokemon Shield, you will find Gigantamax Lapras in one of these rare den raids. Normally it has a low chance of appearing only in certain dens, but right now it has an increased chance of appearing in all rare dens due to a limited-time event.

Look around the wild area for the rare dens with the purple beam of light. These dens may contain Lapras. If you’re having trouble finding one, you can purchase a Wishing Piece from a Watt Trader to try and spawn one in an empty den.

Once you’ve found a den with a Gigantamax Lapras silhouette, this means you will have to chance to battle it and catch it.

If you’re playing Pokemon Sword, Gigantamax Lapras won’t appear in rare dens. Instead, you’ll have to join another player’s raid battle through Y-Comm if you have Nintendo Switch Online.

Press the Y button to access the Y-Comm menu, then press + to connect to the Internet. Then, search through the stamps on the right side for the silhouette of Gigantamax Lapras.

You may need to refresh the stamps often because all types of player communications will show up, not just raids. Once you see a player seeking participants for a Lapras raid, join it quickly before it fills up.

How to Beat Gigantamax Lapras

Once you’ve found the Gigantamax Lapras raid, you’re only halfway done. You still need to beat it and catch it.

It’s possible to defeat it by yourself with only NPCs, but this makes it much more difficult. We recommend teaming up with at least one or two other players online if you’re able to.

Gigantamax Lapras is a strong Pokemon with a lot of HP, so you’ll want to use the most effective moves against it. It is a Water- and Ice-type, so it’s a good idea to use Pokemon that know Electric, Fighting, or Steel moves.

Be careful because Lapras has a chance of knowing the move Sheer Cold, which is a one-hit KO move. It has low accuracy, but this could cause you to lose the battle if it hits too many times.

When you have finally defeated the Lapras, you will have the chance to catch it. If you’ve already registered Lapras in your Pokedex, the best option is to use a Repeat Ball. If you don’t have a Lapras yet, a Dusk Ball is your best option (raid dens count as caves).

That’s all you need to know about finding and beating Gigantamax Lapras in Pokemon Sword and Shield.