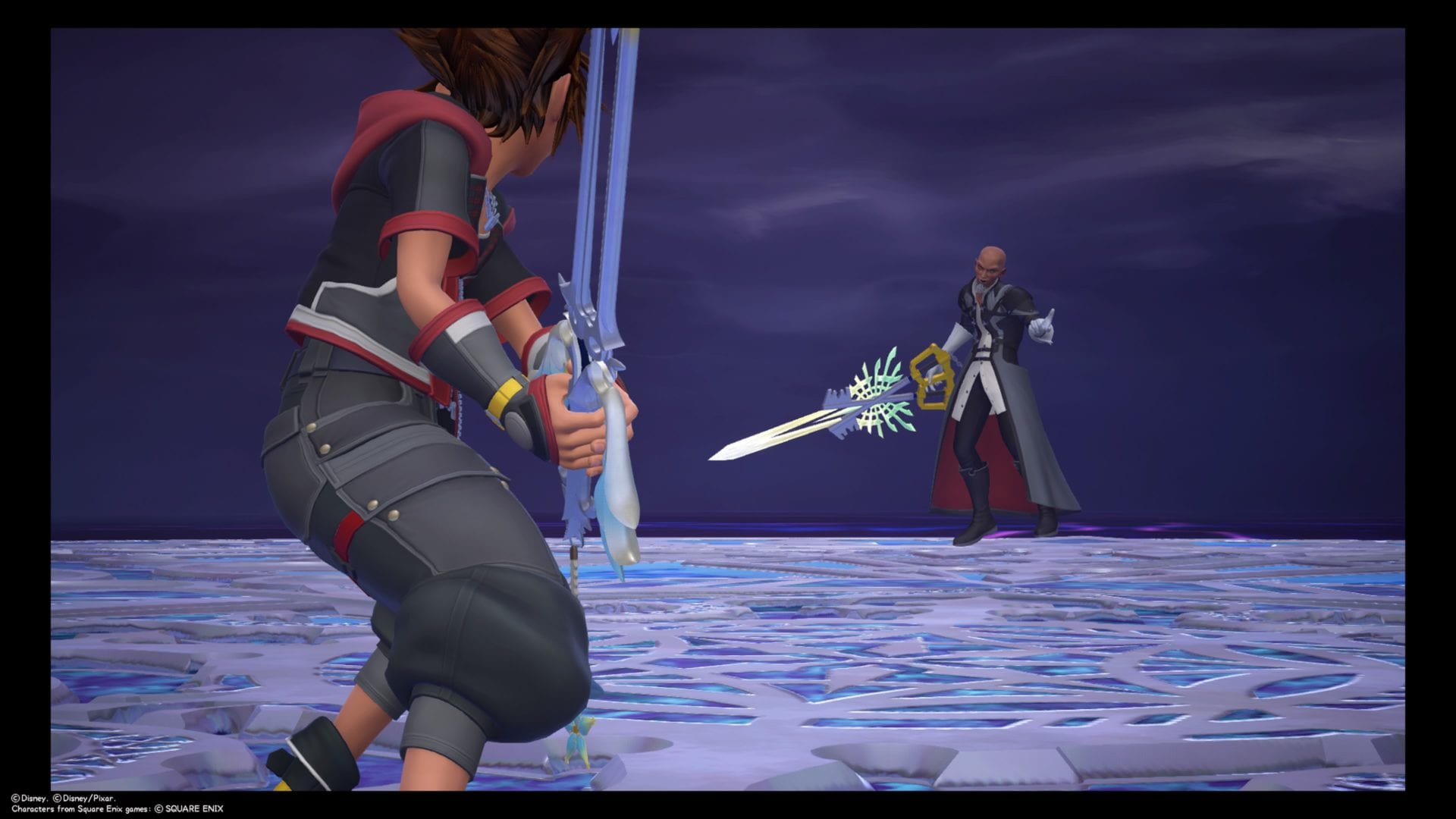 Kingdom Hearts 3‘s ReMind DLC offers some pretty challenging secret bosses in the form of the Thirteen Data Darknesses, but some are challenges you can’t even face until you’ve beaten every other boss first. Master Xehanort is one such example, and that’s why we’re here with a guide to help you figure out how to unlock – and beat – the secret Xehanort boss fight.

This means you’ll have to have successfully defeated the first 11 secret bosses from the Limicut Episode at least once. After you do, it will unlock the boss fights with data versions of Xion and Master Xehanort, and from there you can battle the last two bosses at your leisure.

However, it’s worth noting that these two are some of the hardest bosses in the game, and quite a bit tougher than the rest of the Data bosses in many regards. As such, you’ll want to prepare yourself properly before taking them on.

How to Prepare for the Secret Xehanort Boss Fight

To get ready for the boss fight against Xehanort’s data in Kingdom Hearts 3 ReMind, you’ll want to make sure you have a few key abilities, items and Keyblades unlocked.

For abilities, you’ll want to make sure you have Payback Strike, Counter Kick and Flash Step equipped. All of them track your target from decent distances, and can allow you to keep the pressure on the boss when you manage to find an opening in his defense.

You’ll likewise want to have Leaf Bracer, Second Chance and Withstand Combo equipped. The first gives you an invincibility window which can allow you to resist damage whenever you successfully cast Curaga to heal, and can allow you to be right next to Xehanort during a vulnerability window if timed correctly.

The latter two, meanwhile, will allow you to tank any combos he lands on you and give you an invincibility window that you can use to heal. However, they’ll only keep you from losing your last hit point, so they’re less an ability you should rely on and more of a fail-safe in case of emergencies.

Next, you’ll want to deck yourself out with fully-upgraded Keyblades that have good guarding potential, quick combos and Shotlocks that can hit Xehanort in quick succession, as well as Form Changes that offer combos which hit fast and hard with minimal wind-ups.

Kingdom Hearts 3 has plenty of Keyblades that fit this description, so you can take your pick and go with whichever you’re most comfortable with.

Otherwise, the Hero’s Origin, Oathkeeper and Oblivion Keyblades in particular are all great choices. The first is unlocked automatically by playing through the game, and if you haven’t unlocked the other two since they were added in a recent update, we’ve got guides on how to unlock them here (for Oathkeeper) and here (for Oblivion).

However, you’ll want to avoid using the Wheel of Fate and Nano Gear Keyblades. While they both offer high Strength boosts, and boast sub-abilities which increase Form Change duration or prevent stunning, their Form Change combos have heavy wind-ups that can keep you from getting as many hits as possible off on Xehanort before his vulnerability window ends.

Then, there’s the Equipment you should use. This is another area that’s up to your discretion: If you prefer to deal as much damage as quickly as possible, then you can equip either the Power Weights or Magic Weights earned by defeating the other Data Darkness bosses, as well as rings that boost your Strength to its maximum.

However, if you’d rather ensure you take less damage and weather Xehanort’s many different attacks, you can equip Ribbons, Belts and other Armor which increases your Defense and elemental resistances, while equipping accessories that boost your Strength and/or magic to give you some extra hitting power.

Most any Armor you’ve earned by playing through the base game should be suitable, but we do recommend using the best gear possible; namely, end-game gear unlocked by opening end-game treasure chests or collecting all of the Lucky Emblems.

If you still need to find every Emblem, we’ve got a guide that can help you do it here.

We’ve included some images of our equipment layout below for a frame of reference.

Which Items and Shortcuts You Should Have

Finally, you’ll want to bring as many Elixirs as you can into Kinfdom Hearts 3 Remind’s secret Xehanort boss fight.

While pricey and rare, they’re your best bet for restoring your HP to its maximum amount, and will top off your MP for a Curaga or offensive magic directly after their use.

Otherwise, fill your item slots with Hi-Potions or Mega-Potions. Doing so will give you a way to restore HP in a pinch, and so long as you have Second Chance and Withstand Combo equipped, you should be able to give yourself some time until you can heal with a Curaga in a worst-case situation.

And, of course, make sure you have a Kupo Coin. It’ll revive you with full HP and MP one time in battle, and keep you in the fight past a potential failure.

The button layout can be whatever your most comfortable with, but we’ve included ours above for reference in case you’d like to copy it.

With all of this done, you’re finally ready to take Xehanort on. Head through the door with an image of the χ-blade at the front of the room, and Kingdom Hearts 3 ReMind’s secret Xehanort boss battle will begin.

As soon as the battle starts, Xehanort will come at you with a long range attack. It’ll consist of Darkness energy balls that you con block or dodge, mixed with grid attacks of Light that you can only dodge.

Block the first two Darkness energy balls, and then dodge backward to avoid the grid of Light attacks. Repeat this pattern until the attacks subside. Once they do, Xehanort will throw his weapon at you. Block it from anywhere between 1/4 or 1/2 of the arena, or else you’ll be hit with a massive AOE attack that has the potential to freeze you solid.

So long as you block the attack, Xehanort will be left wide open for an attack. Hammer away at him with combos, and use any form changes you get to increase your damage output while the windows are open. Once you’ve dealt roughly two health bars of damage, he’ll teleport away.

After he does this, he’ll activate his first Stage Transition attack. It’ll take you to a realm of light where he’ll have a series of Light pillars actively rotating around the stage, dealing damage to you if you touch them.

Keep to the edge of the battle arena to avoid these. As you do though, watch out for Xehanort’s new long-ranged attacks: Metal spheres covered in blades, which explode after traveling about 3/4 of the way across the arena.

You can dodge or block these attacks so long as you do so while they’re still in motion though, and if you move toward Xehanort while they’re being launched at you, you can attack Xehanort when he stops to take a rest after throwing the fourth or fifth sphere.

After you successfully survive this attack, or deal enough damage to take out four of his health bars, the stage will transition back to its normal form. Shortly after though, Xehanort will attack with a rapid series of Light grid attacks and a new Beam Cannon attack.

Both can only be dodged. Dodge backward to avoid the grid attacks, and dodge to the side immediately after to avoid the Beam Cannon attacks.

They’ll subside shortly after, and once they do, Xehanort will try to attack you with some basic melee attacks with his χ-blade, as well as more of his Sphere attacks and his thrown AOE attack at random intervals.

Block these or dodge diagonally forward past the attacks appropriately, and then you can attack him during a brief window of opportunity when he stops to rest or is staggered by blocking them at the right times.

Once you’ve knocked off six of his health bars, or just survived his onslaught of attacks, he’ll attack you with four Laser Cannon blasts in quick succession.

Attack him just as the third cannon launches, and you’ll stun-lock him into a window of opportunity. Hammer away at him until he teleports away again. Once he does, you’ll be taken back to the Realm of Light stage transition. Repeat the strategy from before, and repeat the strategy from the first stage until he returns you to the normal stage.

Once he does, he’ll repeat his attacks for the second stage, save for a finisher AOE attack that sees all of his grid-based Light attacks, Laser Cannons and a new Thunder spell fire off at once. It’s fairly easy to dodge though – just dodge backward, and look out for when he reappears to either rest or hit you with a melee attack.

Keep up the pressure on him and strike when he’s vulnerable, and before long he’ll be triggered into activating his third phase once his health drops below 50 percent.

Once Xehanort is down to 50 percent or less HP, he’ll start the third phase and final phase of his boss fight in Kingdom Hearts 3 ReMind.

This will drag you into a new Stage Transition attack, wherein you’ll be dragged to the Organization’s meeting chambers and he’ll hammer away at you with long-range attacks that are difficult to block. It is possible though.

Just keep an eye out for whether he’s launching homing shadow clones at you, which need to be blocked; grid-based Light attacks, which need to be dodged; or melee attacks from Xehanort himself, which now last longer thanks to his morphing his χ-blade into a longer, double-sided weapon. Fortunately, the last attack can be either dodged or blocked, with the proper timing.

However, an easy work-around for not taking much damage from this phase at all is to trigger a summon; specifically Ariel. Her summon keeps you underground and invulnerable to damage several times while it’s active, and can save you valuable items for later.

Summon her as soon as the Stage Transition attack starts, and aim to only hit small jumps into the air. This will keep you underground as much as possible, and prevent you from taking much damage.

If it wears off before the phase is done, or if you don’t have enough MP to do a summon, block, dodge and heal as necessary until you get the chance to summon or reach the end of the Stage Transition.

Once his attacks subside, he’ll return you to the normal stage and return to his attack patterns from his second phase. However, he’ll now use his double-sided χ-blade melee attacks instead of his normal melee combos, and will drag you back into his third phase Stage Transition attack if the battle drags on long enough.

Keep the pressure on him, and leap at any window of vulnerability you trigger. Heal as necessary, and be sure to use form changes – including Rage Form, should it prompt – to increase your damage output, or give yourself a window of invincibility while you’re transforming.

Before long, you’ll have taken him out and taken one of the final steps toward putting this DLC boss gauntlet in the books.