Today Atlus published the results of a survey held during a public preview event for Persona 5 Scramble: The Phantom Strikers in Japan.

The survey simply asked if attendees found the game fun.

As you can see in the chart below, 68% found the demo very fun, while 32% found it simply fun, summing up to an overwhelming 100% positive response.

Apparently, no one responded with the average or negative options. That’s quite the result, indicating that Atlus and Koei Tecmo may have another winner up their sleeve. 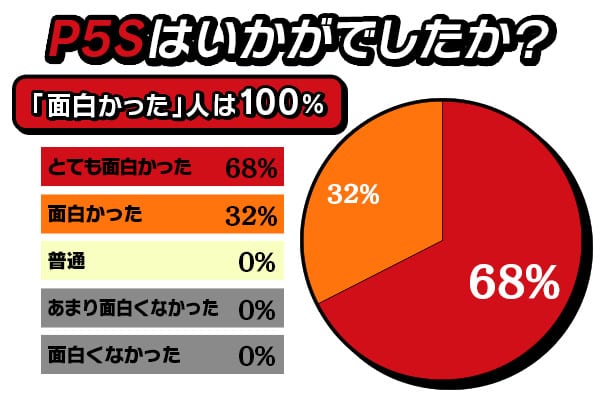 [Editor’s Note: the wording of the question for the survey uses the word “Omoshiroi” which can mean both “fun” and “interesting” in Japanese]

If you want to see more of the game, you can enjoy the latest gameplay, a trailer focusing on the hero, one featuring Sophia, one showing Ryuji, one dedicated to Morgana, one featuring Ann, another starring Yusuke, one showing off Sendai and the features described here, an earlier trailer, a few TV commercials focusing on the various locations of the game, the first screenshots alongside story and gameplay details, a second batch focusing once more on Sophia and Joker, and a third showcasing Ann, Morgana, and Ryuji.