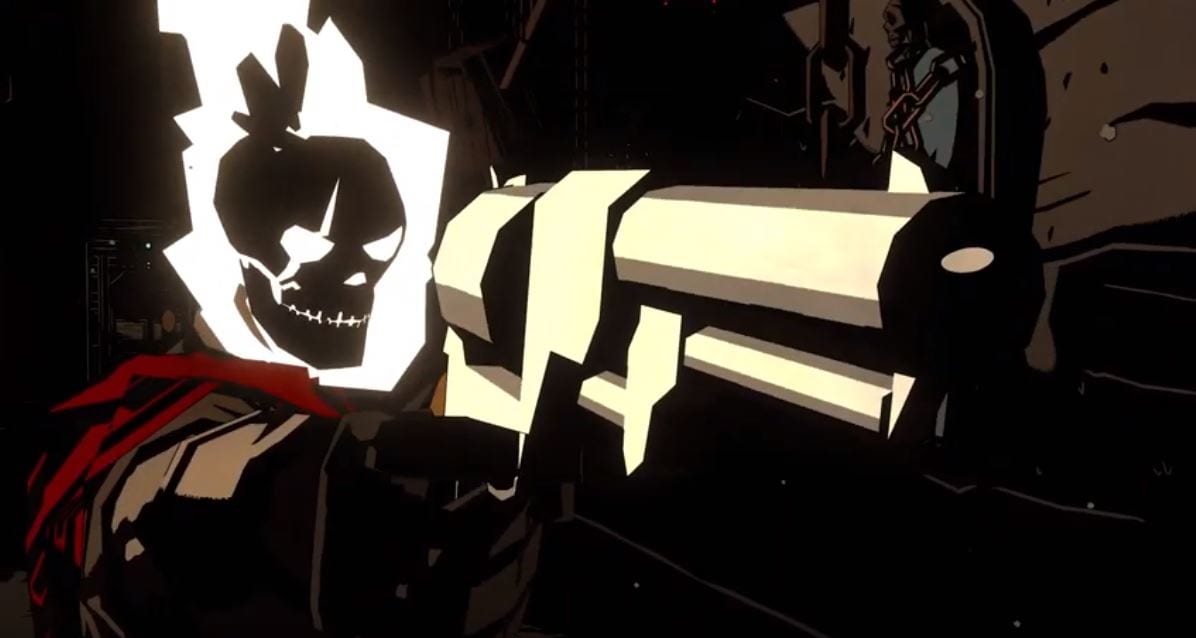 I don’t think a video has sung to me quite like the trailer for West of Dead. Ron Perlman voicing the main character? Supernatural Wild West setting? Twin-stick shooter gameplay? Oh, give me a home where the undead buffalo roam, Raw Fury.

As soon as the trailer ended, I booted up my Xbox One and downloaded the beta so I could see if the game lived up to the hype. Well, West of Dead did and didn’t, which is probably for the best.

When I visited the West of Dead beta store page, I noticed something spectacular: the “box art” was reminiscent of a Mike Mignola drawing. And, after rewatching the trailer again with this in mind, I realized West of Dead looks like a Mike Mignola comic come to life, right down to the color palette.

As a fan of Mike Mignola’s Hellboy series (and the pilot for The Amazing Screw-On Head), my excitement rose higher. However, my enthusiasm was tempered when I heard Ron Perlman speak in-game. Sure, he is fine in the trailer, but something is off about his performance in the actual game.

I don’t know if this problem stems from sound mixing or Perlman’s intonation (or lack thereof), but something is wrong with the voice of his character, the protagonist William Mason.

Normally, Perlman delivers absolutely pitch-perfect performances, but his portrayal of Mason sounds more lifeless than the walking cadavers he puts in the ground. Either I’m missing something about Mason, or Perlman might want to give his lines a few more takes.

Now, when I started West of Dead, I was whisked away to a dark saloon and left to my own devices, so I started pressing buttons. The left control stick moves Mason (obviously); the right stick determines where he faces and shoots, and the A button makes him dive roll. Ok, sounds reasonable.

Then I left the saloon and encountered West of Dead’s best mechanic: the lanterns. The game, or at least the beta, takes place in a crypt, and some areas are better lit than others. You occasionally need to interact with lanterns (i.e., press X) to light the way. This will become important later.

I also found my two first weapons next to the lantern: a revolver and a musket. I thought I would have to pick between the two, but to my relief, I could wield both and test them out on a nearby wooden barricade. As expected, those wooden boards didn’t stand a chance against my bullets.

Through experimentation, I discovered you can’t expend one weapon’s ammo, swap to the other, shoot a few times, and expect the other weapon to be magically reloaded; you need to stop firing and wait a few seconds to reload your guns.

Sure, aiming with the right stick and pulling the controller’s two trigger buttons to fire the different guns felt satisfying, but I initially believed the reload mechanic slowed West of Dead down too much.

Twin stick shooters usually let you fire infinite bullets without ever worrying about reloading or overheating, and a similar mechanic was a major point of contention for manycritics in Contra: Rogue Corps.

However, I then experienced West of Dead’s combat and realized the reload mechanic is an intentional and thematic design choice that sets the game apart from similar titles without hurting the experience.

As I explored West of Dead’s randomized dungeon, I discovered several kinds of enemies: ghouls that shamble towards you, slightly different ghouls that toss dynamite, and rifle-wielding ghouls.

At first, I thought I could approach these creatures like any other twin-stick shooter, sidestepping bullets and mowing down enemies like an unholy fusion of Agent Smith and Dirty Harry.

That mistake almost cost me a life.

In the game, you can dodge roll out of harm’s way, but the dodge is somewhat slow and unreliable if you don’t time it right. Sure, when you dodge successfully, the game momentarily slows down and zooms in to emphasize the effect, but I felt that every time I rolled, I gambled with the reaper.

Sure enough, during my first playthrough, I mistimed a few dodges (this was when I played West of Dead like other twin-stick shooters) and received some new chest holes.

I then realized I was supposed to hide behind the stone coffins littering West of Dead’s rooms, and not just because the words “Take Cover” shone on the screen like angry graffiti.

To hide, you only need to approach a coffin; Mason will snap to the barricade like a magnet. You don’t need to press the A button like cover-based shooters, but you will be tempted to do so. I know I was, and I learned the hard way that doing so while next to cover makes Mason slide across the coffin, usually into harm’s way.

Now, just a heads up: cover doesn’t last forever. After a few hits, your safe haven will crumble, and you should either find a new hiding spot or master the dodge roll.

While disappointing, this system makes sure you never feel too safe during firefights. Then again, melee enemies can just saunter around cover, so you have to keep an eye out for them as well.

Of course, hiding doesn’t get you far since some ghouls try to pick you off from the dark corners of a room. You can always guess their locations after they let loose a shot or two, but your best option is to light a lantern first and then engage.

Not only do lanterns reveal the layouts of rooms, but when you light a lantern, all nearby enemies are stunned. This momentary reprieve lets you pick them off or unleash a melee attack (just walk up to them and press either trigger button).

While you can eventually stun an enemy with enough regular weapon fire, lanterns provide a unique risk-vs-reward system.

Do you hide behind cover and try to hit enemies who are shrouded in darkness and therefore much harder to hit, or do you try to stun them with a blinding flash of light at the risk of having your face perforated? The choice is yours.

Your weapons are another reason you might want to close the gap. Each run initially doles out two different guns: a pistol and a randomized firearm.

Sometimes, I obtained a twin-barreled hand cannon, other times I received a rifle that took ages to aim and reload but could snipe enemies from across the room. While the rifle is good at any distance, the hand cannon packs a punch at short range but seems less effective at longer distances.

Depending on your loadout, you might need to rush the enemy if you want to kill them. But, you can always find a new gun (or side weapons like throwable tomahawks and smoke grenades) somewhere in the level.

I found a small selection of weapons as I explored West of Dead’s catacombs, as well as the occasional shrine that upgraded stats like health and attack power. The guns I found were nowhere near as varied or flashy as the arsenal on display in the trailer, but I was always happy to get my hands on a new shootin’ iron.

However, whenever I picked up a new gun, I had to throw away an old one. Not drop it on the ground but throw away, as in never to see it again. What if I didn’t like the weapon I picked up? What if I wanted to go back to my old loadout?

West of Dead’s no take-backsies approach rubs me the wrong way. While I love experimentation, I also love the ability to fall back on what works if an experiment fails. Here’s hoping the developers change the system so I can backtrack and retrieve discarded guns in the near future.

Now, you probably wonder how the West of Dead beta ended. Well, I eventually found myself skull to skull with a Wendigo. Unlike other enemies, this monster liked to charge my position, which meant hiding behind cover took a backseat to proper dodge timing.

However, the Wendigo hit me several times and left me almost dead. The screen flashed “Take Cover,” so I did, figuring the creature would just bounce off a coffin and leave me unscathed. Instead, the Wendigo demolished my barricade and killed me. You lied to me, West of Dead; you lied to me.

But, I didn’t give up. I tried another run, picked up a shotgun and a new revolver, and fought the Wendigo again. This time, I didn’t listen to the game and just kept on dodging. I eventually won, entered the final room of the level, and received a trophy made out of the Wendigo’s horns.

All in all, the West of Dead beta left me wanting more. While the game is nowhere near as fast-paced as the trailer made it out to be, West of Dead is still a tough and enjoyable experience that rewards patience, skill, and risk taking.

I can’t wait to see what else the game has in store. I’m dying to know why William Mason looks like cowboy Ghost Rider, as well as the purpose of the iron and souls enemies dropped.

West of Dead is scheduled to release in 2020 for the PC, PlayStation 4, Nintendo Switch, and of course the Xbox One.