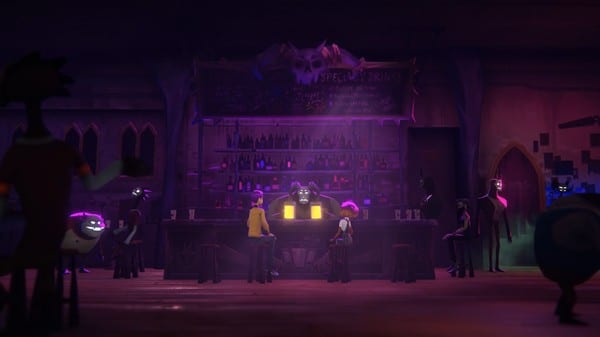 Night School Studios invites players to the biggest party Hell has ever seen, tasking them with out-drinking the devil to protagonists Milo and Lola. No night of drinking is complete without a game of beer pong though, also known as Blood Pong in Hell. Here is everything you need to know about how to play beer pong in AfterParty.

How to Play Beer Pong in AfterParty

The first opportunity you’ll get to play beer pong in AfterParty occurs at the Schoolyard Strangler. You’ll head here after Sam Hill accompanies you to 1st and Izzard.

Once inside, you’ll need to find a way into the party that Sam goes up to. To do so, you can either distract the guard or win the respect of the host through a game of blood pong.

To find the beer pong game, just head over to the right of the bar’s first floor. After talking to the demon, he’ll challenge you to a game.

When it comes down to the actual gameplay mechanics of this beer pong, it can actually be a little tricky.

Even though the concept is the same, aim and shoot to make the ball in the cups, the power and angle don’t always seem accurate.

Alongside this, the game also gets harder to control the drunker Milo or Lola get, as the screen sways and their accuracy dwindles.

Just like in real life though, practice makes perfect, so be sure to try and get as many of the games in as you can.

To summarize, you’ll need to follow these steps to play beer pong in AfterParty:

And that’s all you need to know about how to play Beer Pong in AfterParty.

If you’re still looking for some helpful tips to help guide you through the hangover that accompanies AfterParty, be sure to search Twinfinite for everything about the game.