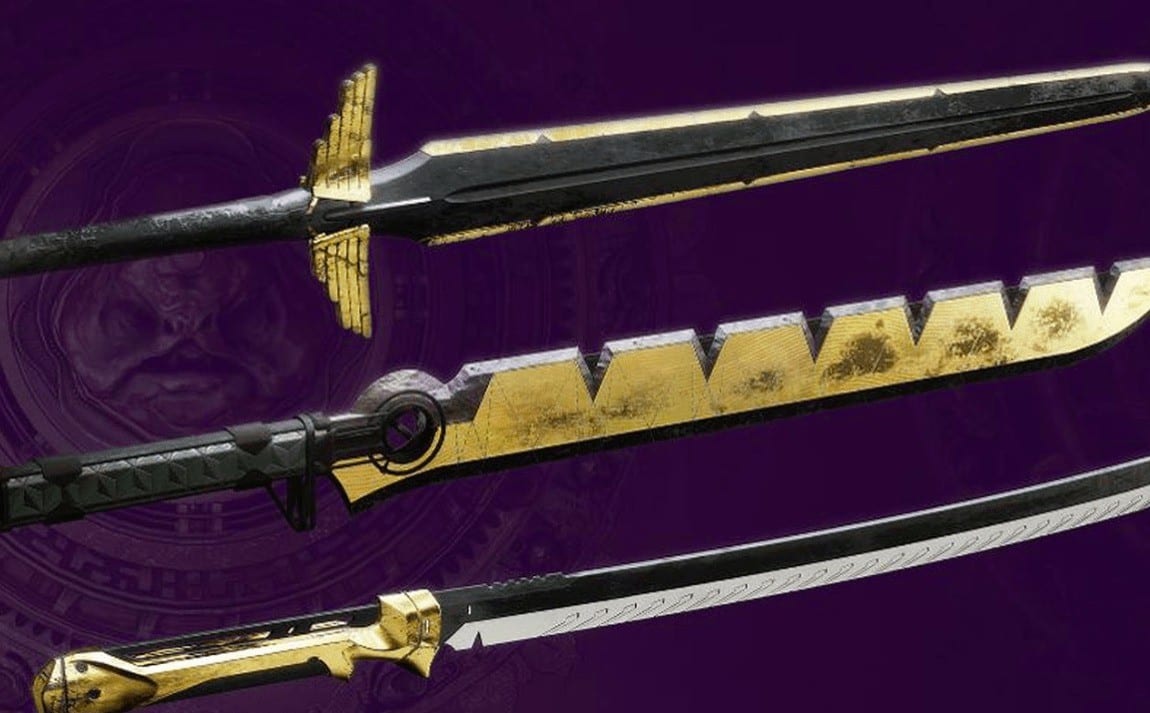 Swords are one of the least populated and popular weapon types in Destiny 2 at the moment. Mostly because there isn’t a ton of archetype diversity between the best swords in PvE, PvP & Gambit right now in Destiny 2.

In situations where you can actually safely use a sword, their damage can be decent, and the changes to reload may give it an additional bump in Destiny 2: Shadowkeep.

In either event, as of now at least, let’s go over the best swords for PvE, PvP and Gambit in Destiny 2.

While there are a few sword archetypes of course in Destiny 2, arguably what’s more important than the frame type are the perks on it.

Right now, and definitely as we move into the Shadowkeep meta, legendary swords that have the Whirlwind Blade perk are among the best that you can choose.

You can pick based on your preference, but if you’re looking for a recommendation, Steel Sybil Z-14 has some great perk combinations with the well-rounded Adaptive Frame.

Another that you can go for is Stryker’s Sure-Hand, which is also a bit more easily attainable as you can grind rolls via the the Black Armory forges.

While legendary swords reign supreme since you can still use your exotic slot for something else that’s more versatile/powerful, it’s at least worth mentioning the Worldline Zero. If you’re purely trying to run through trash enemies at breakneck speed, you can thrash tightly packed groups of enemies with the AoE Tesseract perk attack.

Finally these last few tips is for Titans only. The Titan sword, Crown-Splitter, is an extremely powerful sword with the perk Counter Attack which boosts your damage after defending an attack. This can be paired with Stronghold which allows you to defend without burning ammo to take full advantage of this powerful sword perk.

Also, Black Talon with its catalyst introduced in Season of Dawn also features a big bonus to the damage of the Crow’s Wings attack after blocking. Once again, pair this with Stronghold for some very fun sword action.

If you’re going to commit to being the PvP Sword person in Destiny 2, you might as well go all out and use Black Talon.

Black Talon has the Tireless Blade perk to make the most of the limited ammo you get and it of course features the Crow’s Wing perk which allows you to fire a projectile.

Swords, especially Black Talon, can be very effective in PvP but you have to play smart. Make use of your radar, hide as much as possible and use the third-person angle to peak around corners.

Almost no one is going to be mentally prepared to dodge a Crow’s Wing hit, so if you find your self in a situation where you can’t safely get up in someone’s face, definitely make use of the exotic perk to get kills where you would have otherwise died.

Essentially all of the above applies for the best swords to use in Gambit in Destiny 2 but it’s situational depending on what you want to do.

If you’re reaping, collecting, or doing sentry work, you’ll want to find a legendary sword that has Whirlwind Blade, and perhaps Tireless Blade too to keep your ammo as high as possible.

This will ensure that you can use your exotic slot on something else, and also be able to take on both the primeval and regular enemies effectively. If you only care about reaping minors and majors, you could use Worldline Zero if you really love it that much, preferably as a Titan so you can use the Stronghold exotic gauntlets as well which will improve your survival/defense. Throne Cleaver also is very nice here and you can do some massive damage to a primeval with Shattering Blade.

If you’re a madman and want to run a sword while invading in Gambit, then essentially all of the same PvP strategies apply and you should definitely use Black Talon once again.

The distance on Crow’s Wing is a lot further than you think and you can make quick work of your opponents provided you don’t get blasted with Truth before you even get close.

That’s all for our best Swords in Destiny 2 for PvE, PvP, & Gambit. If you’re interested in learning more weapon recommendations. Check out our all-encompassing lists below:

Assassin’s Creed Odyssey: How to Upgrade Weapons
Nioh: Which Weapon Is Right For My Playstyle