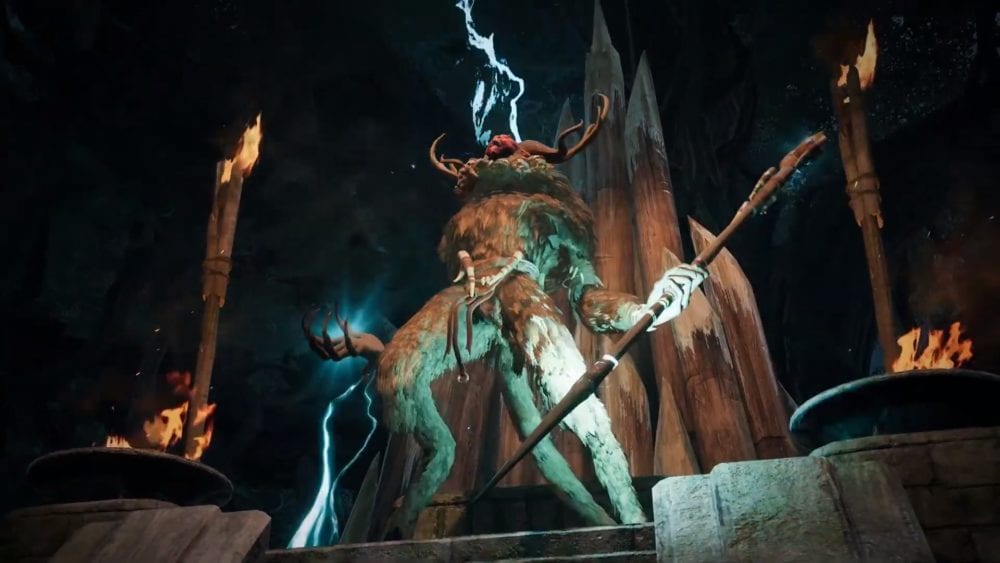 Remnant: From the Ashes is full of wild and dangerous monsters, and none are more dangerous than the bosses. A prime example is Totem Father. If you can’t seem to best this particular boss, here’s a quick and dirty guide on how to beat Totem Father.

These towering terrors in Remnant: From the Ashes will challenge your gaming skills and knowledge of Remnant’s mechanics, and if you’re not careful, bosses will chew you up, spit you out, and light your corpse on fire for good measure.

How to Beat the Totem Father Boss in Remnant: From the Ashes

Totem Father is a world boss (i.e., a main boss) of the Yaesha realm. Since each realm is home to several world bosses, you can’t guarantee he will appear during a particular run.

However, if you enter an area known as the Tempest Court, congratulations. You are about to fight Totem Father, but first you need to decide how he will attack you.

A spinning totem sits outside the boss arena. If you shoot either side of the totem, it will reveal one of two colors that impact the boss fight. A blue totem means Totem Father will focus on ranged attacks, but if the totem is red, he will engage in mostly melee combat.

Simply dodge these projectiles and respond in kind with a shot from a medium or long-range weapon.

However, if the spinning totem is red, Totem Father will tend to leap at you and slam his staff into the ground, which creates an electric shock wave. Just roll out of the way and counter with an attack of your own. If you have a close-range weapon, try to get in a potshot or two.

After trying to skewer you with his staff, Totem Father will either leap back to the safety of his pillars, swipe at you with his claws and staff, or lob electric orbs while on the ground.

He will probably claw at you if the spinning totem is red and is more likely to toss electricity or jump away if the totem is blue. As always, dodge his attacks and shoot him afterwards, and if he jumps away, sucker punch him with a bullet or three.

While you should keep the color of the spinning totem in mind during the fight, don’t assume Totem Father will stick to a single strategy. Even when the totem is red, he will occasionally shoot electric orbs, as well as skewer you with his staff when the totem is blue. Try to stay on your toes.

Regardless of the totem’s color, however, Totem Father will sometimes demonstrate how he got his name by conjuring a totem and driving it into the ground. Totem Father is vulnerable when he does this, so hit him with everything you got.

Totem Father’s totems come in two distinct flavors: Thunder and Spawning. The Thunder Totem, despite its name, calls down lightning that deals a ton of damage if not dodged properly, whereas the Spawning Totem does exactly what its name suggests and summons standard enemies. If a totem pluses with electricity, it’s a Thunder Totem; but if it chimes like a bell, you’ve got a Spawning Totem on your hands.

Regardless of the totem’s type, destroying the object is your first priority. Just ignore the boss for the time being and shoot the enchanted pole until it crumbles. Moreover, if the totem in question is a Spawning Totem, you should kill all the summoned minions before you reengage Totem Father.

While virtually any Weapon Mod can make the boss fight easier, Swarm is your best friend during this battle. Swarm creates a small army of insects that seek out and continually attack enemies, which is indispensable since Totem Father loves to jump around. Even if you lose track of him, Swarm won’t.

After you defeat Totem Father, you will obtain one of two crafting materials that are determined by the spinning totem. If the totem is blue, you will find a Totem Antler that can be used to craft the Eye of the Storm Long Gun.

Otherwise, you will receive a Tempest Heartstring that is a vital component for the Voice of the Tempest melee weapon.

That’s everything you need to know about how to beat the Totem Father boss in Remnant: From the Ashes. For more tips, tricks, and guides, be sure to search for Twinfinite or check out more of our guides below.