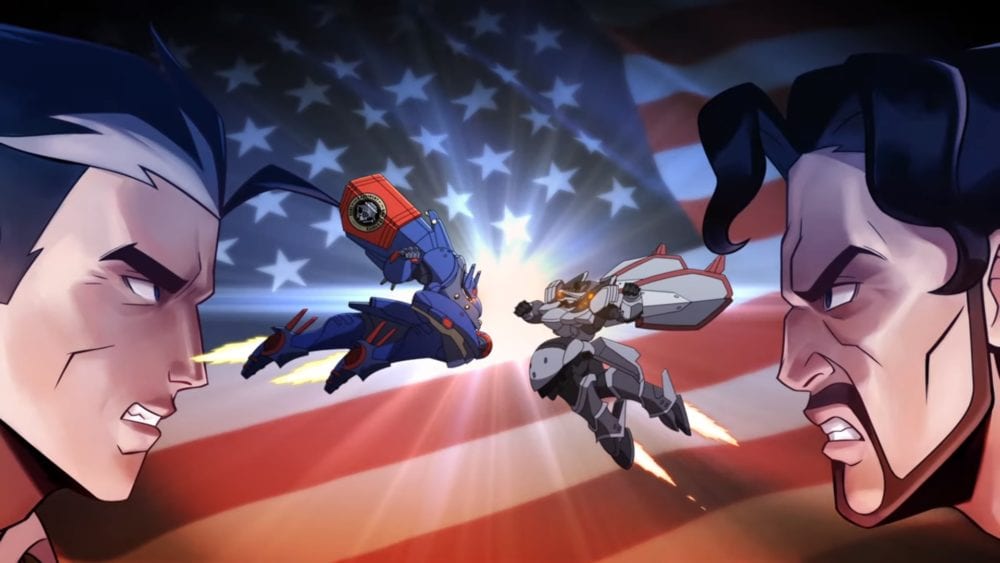 The impending American release of Metal Wolf Chaos XD has been a long time coming, and Devolver Digital is celebrating this momentous occasion with a glorious animated trailer.

The video, which tries to look like an action cartoon from the 80s, presents Metal Wolf Chaos XD in a nutshell even though it features zero gameplay. The game’s protagonist, fictional President Michael Wilson, is in the middle of a televised speech about freedom and how he promises to defeat anyone who opposes it. His impassioned if simple speech gives audiences a glimpse into his psyche and demonstrates that President Wilson is an uncompromising idealist with a good head on his shoulders.

During the speech, however, Vice President Richard Hawk storms the White House with a personal army and giant mech to wage a coup. President Wilson responds with the most American greeting possible: piloting his own mech suit and unleashing a salvo of freedom (i.e., bullets) on Hawk’s forces. And then the video closes out with the two politician pilots charging one another while the Stars and Stripes wave in the background.

The Japanese studio FromSoftware developed the original Metal Wolf Chaos and worked with Microsoft to make the game both a satire and celebration of American culture (and love of explosions), and this design philosophy shines in Devolver Digital’s launch trailer. After all, President Wilson believes in freedom and is willing to defend it in a giant mech not because he witnessed oppression first-hand. No, he’s pro-freedom because he’s the President of the United States, no other reason needed.

Metal Wolf Chaos XD is scheduled to release tomorrow, August 6th, for the PC, Xbox One, and PlayStation 4. The game will feature plenty quality of life improvements, including upgraded graphics and controls, as well as a new save system.