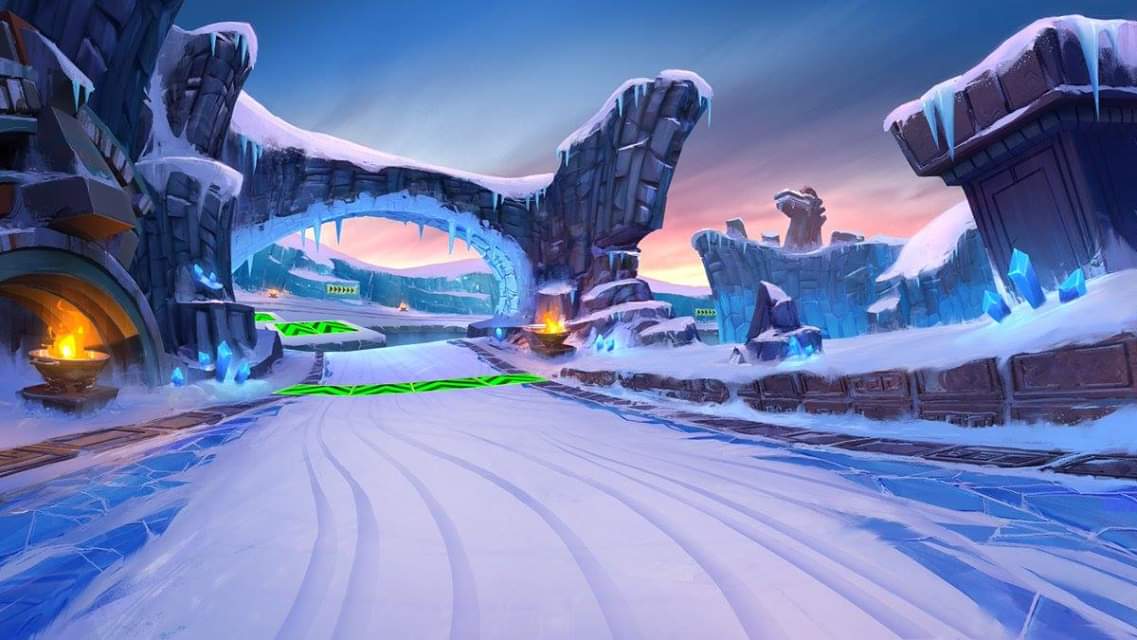 Crash Team Racing Nitro-Fueled is proving to be a wonderful trip down memory lane for gamers that first experienced this kart classic many years ago. But they’re struggling to beat Nitrous Oxide’s (the game’s antagonist) best course times in time trial mode. Today, we’ll help you in your efforts to thwart him with our detailed CTR Polar Pass lap guide.

With an advanced character, achieve a PB (Perfect Boost) when the lights turn green and immediately hop into two consecutive PB’s facing right, this should eventually take you behind the seal. From there, PB your way through the the first two snow jumps facing left, while also jumping at the apex of the hills to achieve maximum boost.

This should all be done while keeping as close to the left-hand side of the track as possible.

You’ll then come to the frozen polar bear. PB a couple of times, facing right, and take the right-hand path. As soon you’re around the side of the bear, quickly jump the opposite way and do three PBs facing towards the right. You’ll slide round the bend and head perfectly into the turbo boost.

Boost from there and then jump the first hill at its apex, and then jump for the even bigger second hill too. Before you’ve landed the second jump, you need to be landing into a boost slide facing towards the left and being very tight to the inside of the corner.

CAUTION- Our advice is based on the run being done very fast to this point, meaning the seal wasn’t an obstacle. If the seal is too close to the inside track, then adjust accordingly and slide outwards a bit more to avoid it. You cannot hit the seal under any circumstances.

Once past the seal, hop into more PBs while ensuring you hit the forthcoming turbo boost.

After the boost, jump off the hill perfectly and do a couple of PBs as you head towards the 4 boosts in quick succession.

Now, other guides will suggest boosting from second turbo boost best all the way over to the opposite side of the track to massively cut the corner. Our recommendation is that you DO NOT DO THIS. We have tried this multiple times and gotten very inconsistent results. We have beaten Oxide’s time without needing to do this.

Doing this shaves of vital seconds with the added bonus that you’re boosting onto more boost. Once you’ve landed on the fourth and final boost, you can then do three PBs, facing right, before the path narrows.

You then want to take the three wooden board jumps on their right-most side. That part will give you some serious hang time.

Also, by not cutting that corner, you will basically have the max possible boost by now, whereas Oxide sacrifices his boost by cutting the corner. If you’re behind for whatever reason, you shouldn’t be by the end of the third wooden ramp jump.

After that third jump, do three PBs, facing left, as you go through the cave. Transition into the hill, hopping at the top if it, before doing one final PB once you’ve landed. You’ll then reach the major shortcut for the track.

As you can see in the video above, all you’ve got to do is the usual perfect jump. At this point you’ll be faster than the speed of light, so a well-timed jump will see you soar over the corner. In mid-air, make sure you’re turning left as when you land, there will be a boost pad.

Boost to the ice and do three PBs across it. Then jump off the tiny hill to get a small boost increase before repeating 3 more PBs over the next ice.

Once you’ve done that, perform two more perfect jumps for the medium hills and then pull yourself over to the middle-to-right-hand side of the track.

DO NOT JUMP THE THIRD HILL. You will likely miss the boost pads and fall. Just let the kart naturally drive over the hill, hit the boosts and jump off the edge of the ice. While in mid-air, just turn left and try and land on the left-side of the track. If you can, PB your way to the line.

Laps two and three will be the same, the only difference being to watch out for the four seals, if their positioning is different to lap 1, then use common sense and adjust accordingly. Just maintain your concentration for three laps and you should be successful with this method!

If you liked this Polar Pass guide, then why not check out our Crash Cove guide for more tips to conquer Oxide’s times! Or, if you need help on unlocking Tawna and the new trophy girl characters in Crash Team Racing, then read our guide here!