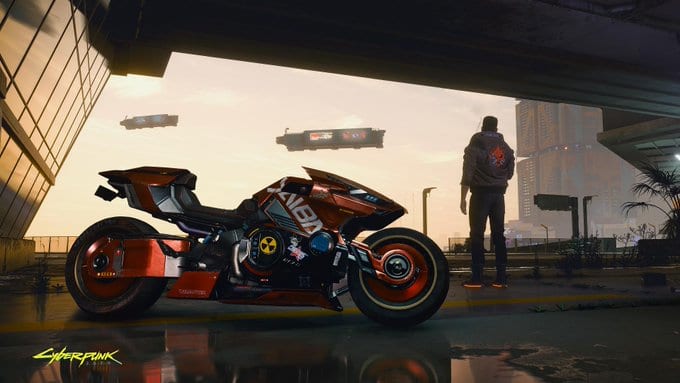 Cyberpunk 2077’s official Twitter page just revealed what appears to be an in-game screenshot of the awesome Yaiba Kusanagi bike that players will be using to traverse Night City’s mean streets. Elsewhere, the CDPR shop is selling some gorgeous concept art as posters.

The screenshot was revealed with the caption “Catching a break with Yaiba Kusanagi”. For those that don’t know, the Yaibi means ‘blade’ in English; Kusanagi refers to a sword. So you could say it’s a cutting-edge sort of machine.

Apart from appreciating Night City’s awesome backdrop complete with floating vehicles and the character’s seriously cool neon orange glowing footwear, we get a nice look at the bike’s decals and Akira-like design.

As previously alluded to, CD Projekt Red’s shop also has a new product line to show off.

Cyberpunk 2077 concept art is now available to buy, and it’s some of the best official imagery of the game we’ve seen yet. Available only in the EU for now, the posters each have a different background and tie-in to the themes of the game e.g militarism, kitsch, and entropism.