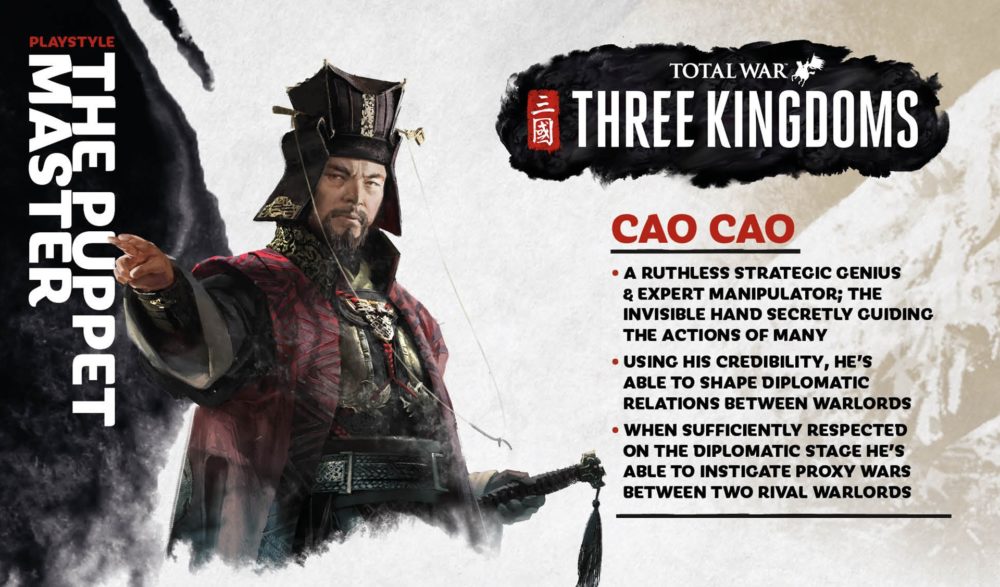 How to Play Cao Cao in Total War Three Kingdoms

Cao Cao, the Puppet Master, the Hero of Chaos. A devious and manipulative warlord able to influence others to his own ends, he also has an eye for talent and many of the greatest warriors of the Three Kingdoms era fight under his banner.

Playing as Cao Cao requires a deft hand, and failing that, an iron fist. His starting location in the Central Plains region means he is surrounded on all sides by potential adversaries, or potential allies if handled correctly.

Cao begins the game in command of the town of Chen, with an army led by Cao Cao, and seconded by Xiahou Dun. You have a small force mostly consisting of militia units with the exception of a unit of Heavy Tiger and Leopard Cavalry, one of the most powerful units in the game… and also one of the most expensive.

On your first turn, deal with the small force of Yellow Turbans in front of you, and then move east into the nearby Livestock Farm, also apart of Chen commandery. This will complete several of your starting quests, granting you some nice bonuses.

End your turn, and on your next, begin to consolidate your forces. While incredibly powerful, your Tiger and Leopard Cavalry aren’t cost effective against the militia you will be facing, replace them with Sabre Militia Cavalry for now and recruit two Sabre Militia infantry and two Archer Militia to round out Cao Cao’s retinue. For Xiahou, recruit as many Ji Militia as you can.

Spend the next few turns mustering, and increase the size of Chen when possible. Once your forces are at full strength, proceed to the southeast, and capture the Livestock Farm belonging to Yangzhou commandery.

Around now, the event regarding Tao Qian should pop up. Follow the storyline here, and go to war to avenge Cao Song. March to the northeast, and recruit Xiahou Yuan and a couple of Lancer Militia Cavalry.

The lands of Wang Lang lies between you and Tao Qian, so invade them on the way. Once you take the township and the farmlands, conquer the temple to complete the province. With this full commandery secure, you should now have enough income to fill the ranks of your army.

Where to Go Next as Cao Cao in Three Kingdoms

What you do next is up to you, but you have some options. To the east along with the coastline lie easy pickings, but be careful not to find yourself over-extended. Expanding to the south and the west is somewhat difficult, as you will quickly run up against Yuan Shu and He Yi, who are both formidable opponents.

To the north, you will find Liu Bei and Kong Rong, who can prove to be useful allies, although they occupy rich lands you may want for yourself.

Whichever direction you decide to go in, remember to take advantage of Cao Cao’s unique faction mechanic, Credibility, which allows him to influence the opinions of others. Butter up those who you would like to be friendly with, and instigate proxy wars to destabilize powerful opponents.

That’s it, everything you need to know to get your Cao Cao campaign off on the right foot. Be sure to check out our other Total War coverage for plenty of other helpful guides such as How to Play Ma Teng, How to use Spies, and Best Retinue Compositions.

For more on Total War: Three Kingdoms, check out our full review of the game here.