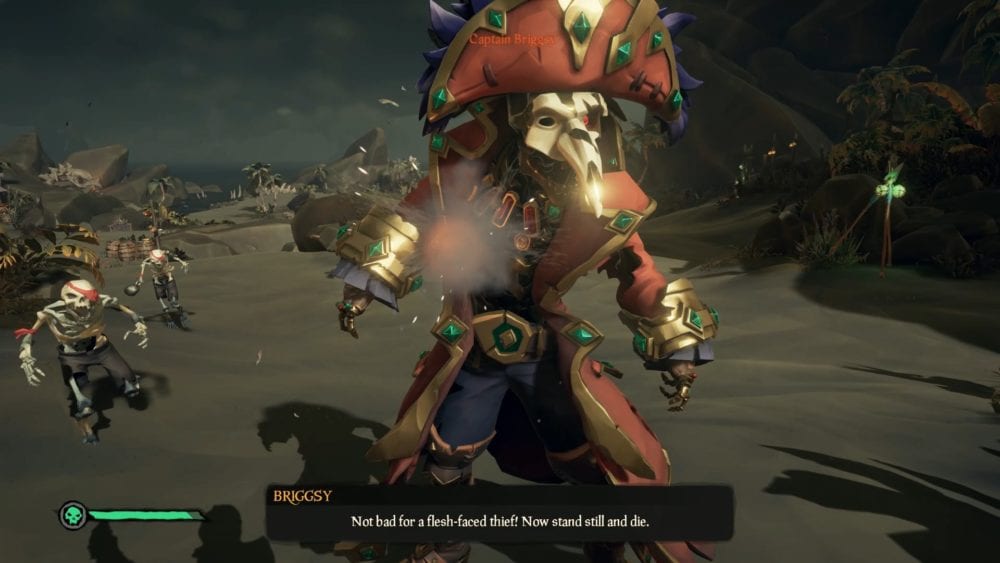 Fighting Captain Briggsy is the climax of The Cursed Rogue Tall Tale quest, and taking her out is no stroll along the beach. Indeed, wielding a cutlass and blunderbuss and able to cast three different special abilities, she’s a handful for even a full crew of veteran sea dogs. Here are some tips on how to beat Briggsy in Sea of Thieves if you’re struggling.

How to Beat Captain Briggsy in Sea of Thieves

First things first: prepare, prepare, prepare. Briggsy has a lot of health, and with so many different attacks to call on, she’ll certainly hit you more than a few times. That’s why you should certainly stock up on cannon balls, food, and gun powder before taking her on.

Obviously, the location you fight Briggsy will be random, and it’s impossible to know whether there will be a decent supply of resources on-site, so best to be prepared.

If necessary, go and raid a skeleton stronghold before intercepting her, so that way you’ll have a stocked ship before taking on the challenge.

As previously mentioned, Briggsy has three different abilities she’ll use against you, which sets her apart from other Skeleton Lords. It also makes her quite a handful to deal with. Here’s what you’ll want to look out for:

Summon skeletons – You won’t just be fighting Briggsy, as she frequently summons skeleton enemies from the ground to join the fray.

Teleport – Not an offensive threat, but Briggsy’s ability to disappear in a puff of smoke and then reappear somewhere else makes her hard to track.

Stomp – This is her most powerful ability, but it’s obviously telegraphed. Briggsy will raise her hands, hover in the air for a bit, and then come crashing down, which sends a shockwave in all directions. Anyone caught in this shockwave will take massive damage.

Once you’ve prepared for the fight, beating Briggsy is a case of, first and foremost, managing the number of skeletons she summons. If you’re with a crew, make sure you’re coordinating so that some of you are taking out skeletons and the others are chipping away at Briggsy herself.

Having one player constantly shooting at her with cannons is a very good idea, assuming she’s within firing range. This won’t always be an option given that some islands just won’t be suitable for shore battery, but it should definitely be something you consider.

For the players tasked with fighting Briggsy, a good strategy is to have one person drop gunpowder kegs at her feet and another then shoot them. This will obviously cause an explosion for quite a bit of damage.

If a player dies, get them to bring another barrel onto shore from the spawn point so that you can keep this tactic going.

A key thing to note with Briggsy is that she’s actually a gold skeleton, which isn’t at all obvious because of her mask. That means she’s weak to water, so definitely take advantage of that.

Our favorite tactic is to try and lure Briggsy to a beach and then have players assigned specific roles –one on skeletons, two on Briggsy, and one firing cannons from the ship. Use either a Wearyball or a Grogball, and then once she’s asleep or sick have them switch to cannon balls.

Just remember not to get too close, as Briggsy can cause significant damage to your ship.

That should give you a good idea of how to beat Captain Briggsy in Sea of Thieves. It’s a long and tough slog that will probably take you around 20-30 minutes on a good run, so just keep plugging away even if you feel as though you’re not making any headway.

For more useful tips and guides on the game, be sure to search Twinfinite.