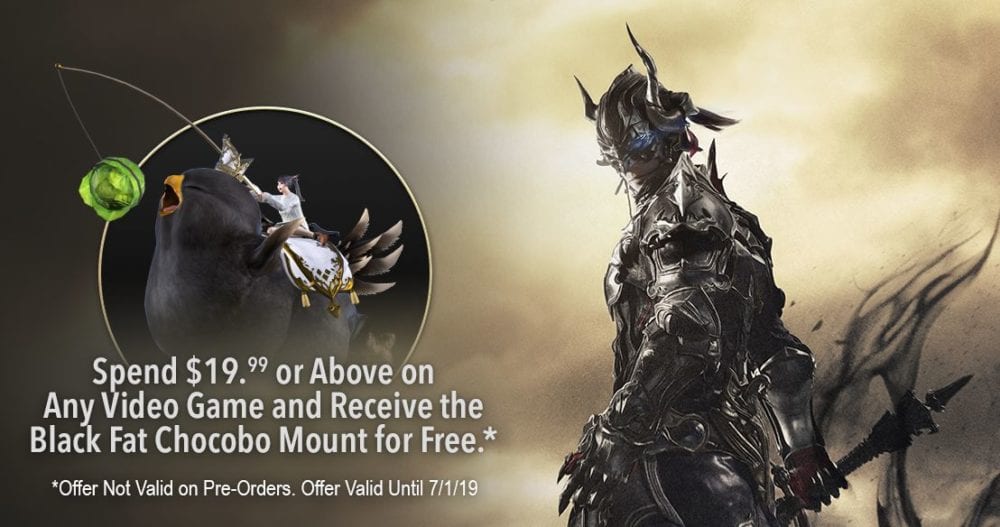 Western Final Fantasy XIV fans have been unable to get their hands on the Fat Black Chocobo mount for a few months, but this just changed, with a few caveats.

The mount was the prize of collaboration in Japan that prompted fans to purchase branded Karaage Kun fried chicken at the Lawson convenience store chain. While the chicken was quite yummy, the codes provided by the promotion only worked on Japanese accounts, so even frequent visitors to the country like me were unable to ride the massive chocobo in game.

Today Square Enix announced a promotion in collaboration with Amazon.com offering a code for purchases in the video game department, as long as you spend over $19.99.

The first thing you should keep in mind is that the codes are valid only for North American accounts, so players from Europe are still left out.

The second caveat is that it doesn’t apply to pre-orders and it doesn’t even appear to apply to all released games. Before you make your purchase, you should make sure that the promotion applies. It should be displayed as follows.

On top of that, reports on Reddit mention cases in which the promotion appears to apply on a product’s listing page, but then it doesn’t when you check out, so you should double check before you pay.

The promotion is also valid only until July 1.