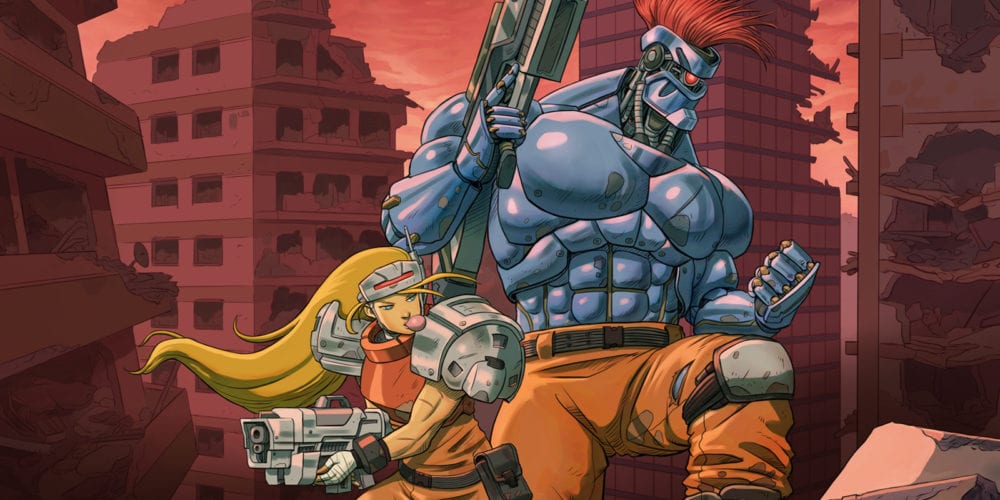 The Arcade Crew and Joy Masher released a new trailer for Blazing Chrome, a retro, 2D action shooter inspired by run ‘n gun games such as Contra and Metal Slug.

In this new trailer, they show off blisteringly fast shooting gameplay as well as revealing two hidden characters you can unlock in the game.

Here you can read a synopsis and catch up on some of the key features:

In Blazing Chrome, machines rule the world and the few humans left are on the edge of total extermination, lacking power, prestige or status among their metal and circuits overlords. Bring your best pal and kick some metal butts to free the humankind while enjoying a classic run’n’gun, fully loaded with action and exciting fights!

Humans are expendable after an AI controlled robot army take over the world. They survive in hiding while their hunters rule the surface. When a small rebel group gets an intel about a big AI’s power plant, the machines strike their camp before they can organize an attack. A small group of rebels escape and go in a suicide mission to destroy this power plant. Choose to play as Mavra, a super badass human resistance soldier, or Doyle, the equally groovy and deadly insurgent robot. This suicide mission will result in heavy casualties and a ton of lock-and-load fast-paced action where scraping robots and blazing chrome with your powerful weapons is the only thing standing between you and your freedom.

Dash through 5 apocalyptic environments with hundred of robots-enemies to blow to pieces. Blast your way through the enemy lines and and try to defeat a bunch of mechanical bosses with using hoverbikes, huge armors and a whole arsenal of kick-ass weapons.

Blazing Chrome offers a lot of features in the legacy of classic run’n’gun games:

Blazing Chrome appears to satisfy an old-school action itch, being inspired by 2D classics such as Contra: Hard Corps and Contra III: The Alien Wars. If you’re interested in the Contra franchise itself, you can check out the recently announced Contra: Rogue Corps,

Blazing Chrome will launch on July 11 on PC, Xbox One, Nintendo Switch & PlayStation 4.

You can enjoy this new trailer for the game down below: