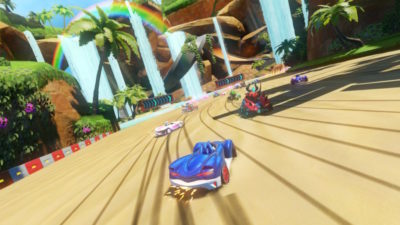 The newest kart racer that focuses on Sonic and his franchise’s cast of characters is out now on PC and consoles. While you can play through all the single player stages by yourself, as you’d expect, the multiplayer races are the selling point for many.

You may be wondering, therefore, if Team Sonic Racing supports cross platform play, so that you’ll always be able to find a full lobby or play against your friends on other systems. Here’s everything you need to know.

Unfortunately, there is no cross play of any kind available for the game. It’s not a case of two systems not playing nicely and the others all working together, you can only play Team Sonic Racing against players on the same system as you.

While that means you won’t be able to play against friends if they’ve bought the game elsewhere since the game has only just released, the lobbies should still be pretty full. How they’ll be without cross platform play in the future, only time will tell.

While SEGA hasn’t commented on cross platform playing being in the works for Team Sonic Racing, there is always the possibility that it could come to the game at a later date.

Of course, if they even comment on that possibility or the feature is actually added to the game, we’ll be sure to update you here. Since we’ve not heard anything yet, though, I wouldn’t hold your breath for it to be any time soon.

That’s everything you need to know about whether Team Sonic Racing is cross platform. For more tips and tricks on the game, be sure to search for Twinfinite. We’ve also listed some other helpful guides down below.