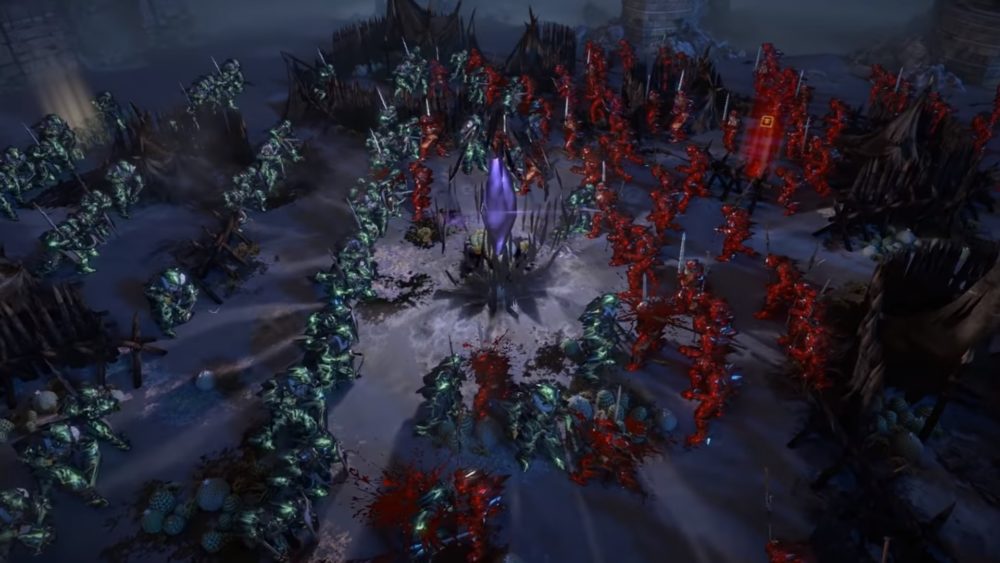 Grinding Gear Games has pushed the envelope of dungeon crawlers thanks to Path of Exile, and the company continues its warpath into the future with the upcoming expansion Path of Exile: Legion.

Path of Exile: Legion will focus on five titular legions. These armies, which are trapped in the Domain of Timeless Conflict, can be encountered via Timeless Monoliths. Once players activate these monoliths, they will have several seconds to pull as many enemies and chests as they can out of the alternate dimension.

The name of the game in Path of Exile: Legion will be risk vs. reward. Players will have only so much time to decide which soldiers to rescue, slay, and transform into loot pinatas. Will gamers free a battalion of weaker enemies for fewer rewards and easier fights, or will they go after elites who drop powerful loot and hit like an avalanche? As the website proclaims, “Legion grants you full control over risk and reward.”

Since Path of Exile is all about killing enemies for loot, Legion will include several treasure troves worth of new items. While players can always farm for random gear, they also should be on the lookout for enemies who display unique symbols, as they will drop specific items.

Plus, players who want guaranteed loot can equip Incubators, which will drop a powerful item after players have killed a legion’s worth of enemies (that’s about 5,000 bodies, give or take a few thousand). However, gamers still need to loot Incubators off of enemies.

Moreover, lucky players might find Legion Jewels on enemies from the Domain of Timeless Conflict. These jewels, when socketed into the Passive Skill Tree, will modify passive skills within a certain radius, allowing players to customize characters like never before.

While Timeless Monoliths will grant players a glimpse into the time-displaced hell that is the Domain of Timeless Conflict, they can temporarily venture into the domain by looting Splinters from Legion enemies, combining the Splinters into Emblems, and placing two or more different Emblems in a Map Device. As you might expect, doing so will transport players into a skirmish between the respective legions, which means plenty of enemies to quench that everlasting desire for loot. However, with enough time, hard work, and an upgraded Map Device, players can eventually participate an all-out melee between all five legions

If Path of Exile: Legion only included the titular legions and their loot, it would be more than enough, but Grinding Gear Games also plans to introduce some melee combat revamps. Movement skills will be instantaneous; attack animations can be cancelled, and melee attacks will hit multiple enemies, just to name a few improvements. Plus, early-game monsters will be rebalanced with better AI and attack wind-ups to compliment the melee revamp.

Path of Exile: Legion will launch June 7th, several days after the current Synthesis League ends. Since the current league focuses on the Memory Nexus and Fractured items introduced in the Synthesis update, and the previous league revolved around the Immortal Syndicate from the Betrayal expansion, it is safe to assume a new Legion-themed league will launch shortly after the update.