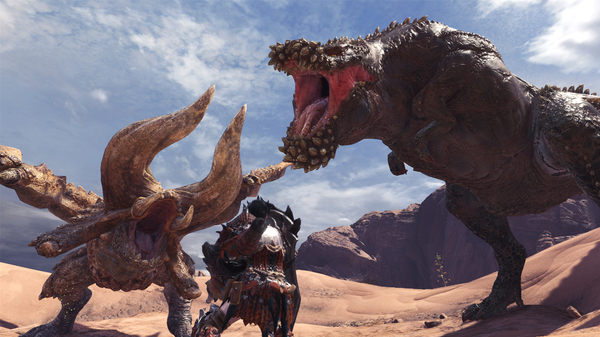 Capcom has announced that a reveal stream for an upcoming Spring Update will be on for this week. Interested players curious about what’s next for Monster Hunter: World can tune in this Thursday at 4 P.M PT/7 P.M ET on the game’s official Twitch channel.

No word has been made about whether or not the stream will also include information about the anticipated Iceborne expansion which has remained incognito for the most part since it was announced late last year.

Iceborne is due to come out later this year, likely in the fall, and will add a new area of the New World, presumably with some ice-themed monsters to fight.

Monster Hunter: World released last year to acclaim from both players and critics. It was a major step in the direction of both modernizing the series and also introducing the franchise to a wider home console audience.

Most recently, Monster Hunter: World was added to the Xbox Game Pass collection, meaning anyone with an active subscription to Microsoft’s service can download and give the game a try if they haven’t already purchased it. Maybe the Spring Update reveal will motivate some players to return and potential new players on the fence to give it a try.

In addition to Xbox One, Monster Hunter: World is also available on PlayStation 4, and recently received a port to PC as well. Iceborne will be coming to all platforms, but the PC version’s release window is a little murkier as compared to the other two platforms.

Presumably the Spring Update will also be coming to all three platforms, but we’ll hopefully learn for certain whether the PC will get this update at the same time as PS4 and Xbox One later this week.