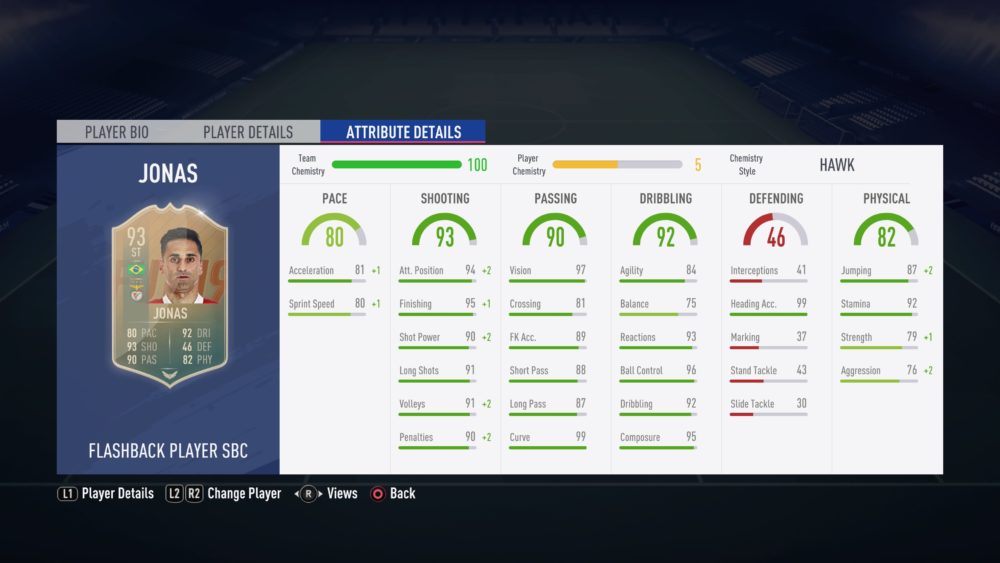 To celebrate his inclusion in the 2017 TOTS and the end of his Benfica career, one of the fan favorite players has been given a Flashback card by EA Sports. Here’s everything you need to know about how to complete the Flashback Jonas SBC in FIFA 19.

How to Complete Flashback Jonas SBC in FIFA 19

Coming in at around the 150k coins mark, it’s a decent value SBC. Considering that he has five-star weak foot and great technical stats, it’s a great card. Here are the requirements:

The first thing that I’d recommend doing is waiting to complete this Flashback Jonas SBC. Since it arrived on the same day as the Bundesliga Guaranteed TOTS SBC, high rated players have flown up in price. By the time this challenge is about to expire, prices will have dropped again.

Once they have, you can use any major league in FIFA 19. Liga Nos and Bundesliga might not be smart to go for, since many of the high rated players aren’t in packs this week, but the likes of La Liga, Premier League, and Serie A are all good options.

For the Benfica player, Jonas would be a good choice, as he’s not one of the players from the Liga Nos who has a TOTS card. He might also be a good option for the Brazil squad too. There are loads of good Brazilian options, though.

For the TOTW players you need in the Flashback Jonas SBC, you should stick to players from the current FIFA 19 TOTW, since they’ll stay cheaper by being actively packed throughout the week.

That’s everything you need to know about how to complete Flashback Jonas SBC in FIFA 19. For more tips and tricks on the game, be sure to search for Twinfinite.