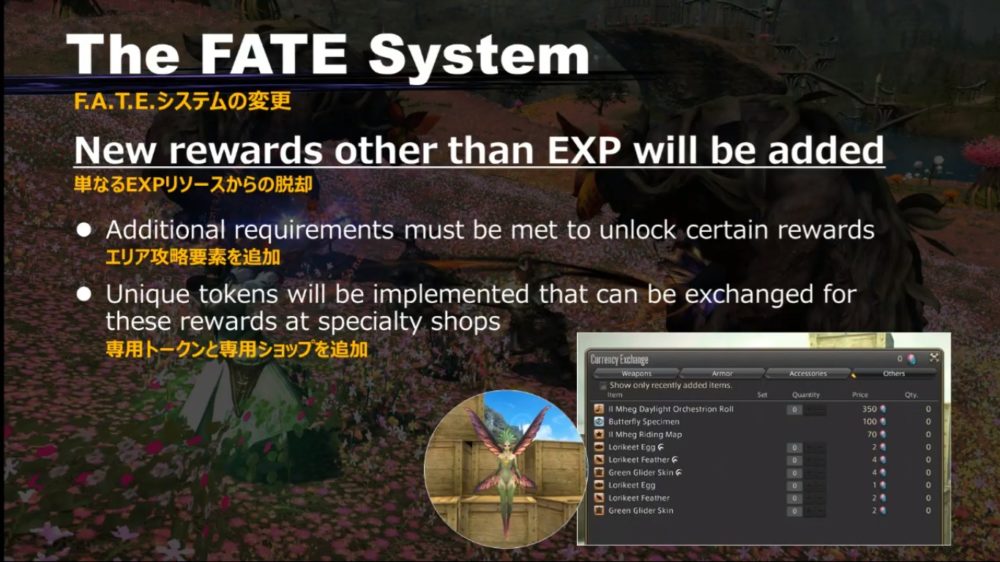 Just over a week ago, Square Enix finally implemented the much-awaited cross-world visit feature in Final Fantasy XIV. Now, players can hop into different servers within their data centers, and visit friends that they might not have been previously able to play with. It’s a good feature that makes FFXIV feel just that bit more social, but it also comes with its fair share of issues.

In my personal experience on Balmung so far, nothing’s changed. It’s still an incredibly social, role-playing hub where players find joy in getting into character and creating personal stories with one another. Balmung’s also been moved into the new Crystal data center, along with other servers like Diabolos and Mateus.

Right from the get-go, the smaller data center size means that the in-game Party Finder feels markedly less active than before.

Whereas you’d usually find tons of listings ranging from Extreme clears/farm parties to gathering and crafting offers or even Free Company advertising, Crystal’s Party Finder definitely feels a little quieter compared to how things were when Balmung was still part of the larger Aether data center.

However, perhaps the biggest appeal and the greatest success of the world visit feature so far is the ability to world hop between servers and take part in activities there. In the past few days, I’ve been able to finally visit the homes of a few friends in Diabolos without having to sign in with my alt character, and even complete treasure maps together.

With how chatty Balmung’s general chat can be in certain areas, it was also nice to hang out in lower population servers and check out their scene.

With Mateus being the up and coming role-playing server secondary to Balmung, this also ends up being a great opportunity for role-players from either server to meet up and interact, and potentially even host new role-playing events of their own.

And that’s not even to mention that players can now make marketboard purchases from other worlds, which is especially huge for servers with economies skewed towards the crafters and sellers.

Admittedly, this does make life on Balmung a little harder, as our market is completely flush with overwhelming supply. It’s a real buyer’s market over here, and while the economic impact hasn’t hit quite as hard yet, I’d imagine that market prices will start to stabilize if more players start catching on to the idea that they could potentially get cheaper materials on Balmung.

Players won’t be able to sell stuff on other marketboards of course, but for the savvy buyers who are determined to get materials at the lowest possible price, FFXIV’s cross-world visit feature has a lot of potential.

On the flip side, it’s clear that this feature brings with it a ton of growing pains as well. For starters, the queue times to get into certain servers can be annoying. Jumping from one server to another isn’t as simple as most people would like, as you’d first have to interact with the Aetheryte from one of the three main cities, then get into a queue and wait if that world’s full up.

For high population servers, this can be a problem especially if there are already queues for getting into your own homeworld at prime time. Mix in visitors from other servers, and those queue times can increase. Imagine the pandemonium when Shadowbringers releases in July.

Not only that, but there’s also the curious problem of social etiquette when it comes to completing hunts in other servers. Ranked monsters are timed spawns in FFXIV that you can kill for rewards, but if you miss the spawn, or if someone else kills it before you can get there, you’ll need to wait a while before it shows up again.

And of course, the more powerful the monster, the longer the wait time.

Server hopping in FFXIV has surprisingly introduced the occasional issue of foreigners pulling and killing hunt marks without adhering to that particular server’s etiquette or system of dealing with such marks. Typically, you’d get someone announcing in the chat that a mark has appeared, along with the coordinates, and everyone flocks over to assist with the kill.

With server hoppers, though, that might not necessarily be such a sure thing anymore.

Then there are the more minor flaws of the system, such as glitches preventing players from returning to their homeworld, or even more absurdly long wait times to go back home because your server’s currently flooded with visitors. Or the fact that you’re not allowed to attend wedding ceremonies in other servers, which feels like a really strange restriction.

Overall, though, FFXIV feels like a better game with the implementation of cross-world visiting. As I mentioned earlier, it makes the game feel even more social than before, thanks to being able to meet players from different ‘walks of MMO life,’ so to speak.

It’s certainly undergoing a pretty jarring period of adjustment at the moment, but it’s a good step in bringing the community closer together.