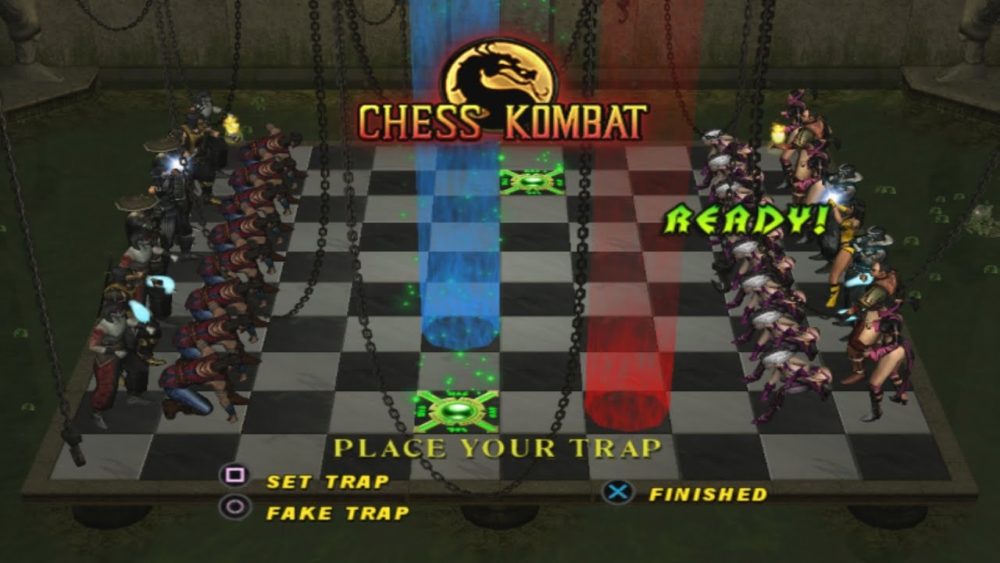 The Mortal Kombat series is well known for silly game modes or just a general feeling of not taking itself too seriously and experimenting with things that might be irrelevant or out of place. Friendships, Babalities, Test Your Might, Motor Kombat, the campy movies just in general; the creators clearly are willing to have fun. Arguably the most bizarre example of this was Chess Kombat from Mortal Kombat: Deception released back in 2004. On the surface, Chess and an action-packed fighting game where you can rip the spines from your opponent don’t appear to have a lot of common. However, the Deception team found a way to mash Chess strategy with fighting gameplay in an ingenious way.

While anyone who played Deception already has fond memories, let me explain to those who didn’t get to experience the majesty of Chess Kombat, or perhaps are new to the series with the recent games inlcuding Mortal Kombat 11.

In Chess Kombat, players would assign the traditional chess pieces like Pawn, Bishop, Rook etc. to various Mortal Kombat characters playable in Deception that were then placed on a chess board and would move in a way similar to regular Chess but with a few twists. The objective is the same: capture (or in this case kill) the King AKA the Leader.

Depending on the piece the fighters would have different health. So you have a lot more Pawns, but they had far less health than the other pieces on the board, because they’re, you know, weak pawns.

A Knight and Rook would have more health for example, and your King and Queen would have full health. As opposing team pieces come in contact with each other they battle it out to see who captures who with damage between fights carrying over.

This opened up strategic decision making such as deciding to make your best character your King to give it the best survival chance. Or do you make your Pawn your best fighter since there are so many of them on the board?

On top of that, to give it even more of its own flair, many pieces such as the traditional Bishop (known as a Sorcerer in Chess Kombat), had a set of one-time use abilities that can change the course of the battle such as Imprisoning an opposing piece for a certain amount of turns. Trying to capture/protect pieces that had important perks like that was also part of the strategy of Chess Kombat.

No one asked for Chess Kombat to be added in Mortal Kombat: Deception, but once MK fans like myself got a taste, we didn’t know how we ever lived without it. It’s been an oft-requested feature ever since.

Sadly, Chess Kombat remains exclusive to Deception. In response to a fan asking Mortal Kombat co-creator Ed Boon about Chess Kombat the other day, Boon joked about it being added in the next patch.

RT @AlbertGz24 "@noobde Please add this mode to the game. So much fun 😤

Me: Done. Next patch. 😉pic.twitter.com/X3JrEApKog

Unless Chess Kombat was already being developed and the team was planning on unleashing it out of nowhere as a major surprise, Boon is saying this tongue-in-cheek here.

But while Boon might be kidding around, fans like me are not. It’s not clear if Boon realizes that yes, fans actually really want Chess Kombat in Mortal Kombat 11; it’s not a meme. it was an awesome game mode that worked so much better than it sounds on paper. Here are just a few of the responses to Boon’s Tweet:

PLEASE LIKE WE NEED CHESS KOMBAT. Its soo fun. I was playing it the other day!

I could add more but you get the point: people really love Chess Kombat. It might take time to develop and polish it to meet Motal Kombat 11’s high visual standards, but I do truly believe the effort would be greatly appreciated by fans.

The MK 11 team wouldn’t even need to change a thing gameplay-wise. Deception’s Chess Kombat is perfect; just give us that again and very few players would complain. I’m not going to stump for even more paid content in Mortal Kombat 11, but if I’m being real, I would pay for it.

So Mr. Boon, if you find it in your heart one day, whether it’s for Mortal Kombat 11 or the next game, please give us a modern day version of Chess Kombat. The community isn’t yanking your chain, we want it.