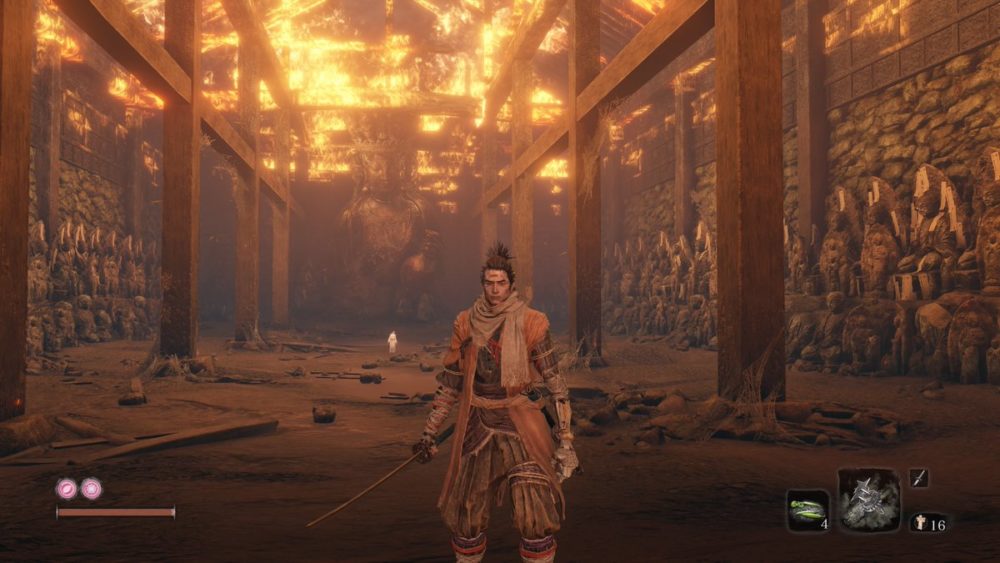 FromSoftware has a long and storied history of creating compelling, lived-in worlds full of terrifying monsters and tragic heroes with its acclaimed Souls series, and Sekiro is no exception. In addition to the esoteric nature of the games’ narratives, they set a gold standard for indirect and environmental storytelling.

The dark gothic world of Lordran is built upon the bones of previous civilizations, the roots of which can be found if you delve deep enough. The grim Victorian setting of Bloodborne’s Yharnam played host to a civil war of science and faith long before the night of the Hunt, although you might not realize it if you stick to the critical path.

When players stop to absorb the detail in these grim, seemingly dead worlds, there are subtle stories to be discovered… and it’s this implicit narrative design that has become synonymous with FromSoftware.

The developer’s latest game, Sekiro: Shadows Die Twice will feel familiar to any Souls veteran, but it’s actually a big departure from the Soulsbourne games it shares its DNA with. More than just the gameplay differences, Sekiro’s underlying tone, level design, and setting are much more direct than in previous titles.

This time around there are named NPC’s with reams of dialogue with whom you will regularly converse. You play as Wolf, a shinobi in the service of Lord Kuro, and the adopted son of an infamous ninja named Owl. This is not some monstrosity cooked up in character creation, but a real character with his own motivations, history and place in the world.

But from the very start, the environmental storytelling that FromSoftware is known for is on full display, and the areas surrounding Ashina castle are full of interesting nooks and crannies that hint at a grander narrative than you might expect from the outset.

From the first moments in the Dilapidated Temple, where Wolf awakes and is fitted with his prosthetic arm, you are going to have questions. Sekiro doles them out, but at a snail’s pace, and instead of straight answers you are given half-truths and more questions. Who is The Sculptor, and why is he carving these creepy Buddha statues? Who is Emma, and why does she know so much about the Dragon Heritage?

Ashina itself is preparing for war, that much is clear. Against who, or why, is initially unknown. The foes you encounter early on are clearly soldiers, and by eavesdropping on some conversations you get the idea that they are going to need to resort to some pretty desperate measures in order to be victorious.

Some of them, at least in the Ashina Outskirts, appear to wear scaly cloaks. These are usually the veteran troops, and they seem to wear them as a badge of honor. A thorough exploration of this area will yield an unsettling discovery: a monstrously large snakeskin shed over the side of a battlement. Ominous, and foreboding, this kind of foreshadowing of encounters to come is what truly makes these games sing.

Soldiers are constantly on patrol and are mustered around entryways and choke points. Conventional weapons have been stockpiled close to hand, and weapons of a more monstrous kind have been kenneled and half-tamed. All of this suggests a land and people preparing to fight a bitter war to the very end.

Corpses slumped against castle walls tell their own story, but there is enough grey area provided for the player to fill in the blanks. Who are these people, and what are they fighting for? And just how far are they willing to go for a lord who will stop at nothing?

With Sekiro, FromSoftware has taken the best of both worlds, the traditional story that is conveyed through the now quite verbose NPC’s, and the indirect micro-narratives that you have to work a little harder for. This fusion marries the esoteric with something much more cohesive and direct and is all the stronger for it.

The Sculptor and Emma, in particular, have pages and pages of dialogue. You can even share a drink with the Sculptor for additional world-building, the saké required is usually a reward for a difficult encounter, and you really have to work to get the full picture.

Chances are we won’t see a new title from this studio for quite a few years, and there is no guarantee whatever they do next will be a new IP… but if it is, it will be fascinating to see which way they go, and whether Sekiro was just an experiment in a different style of storytelling.