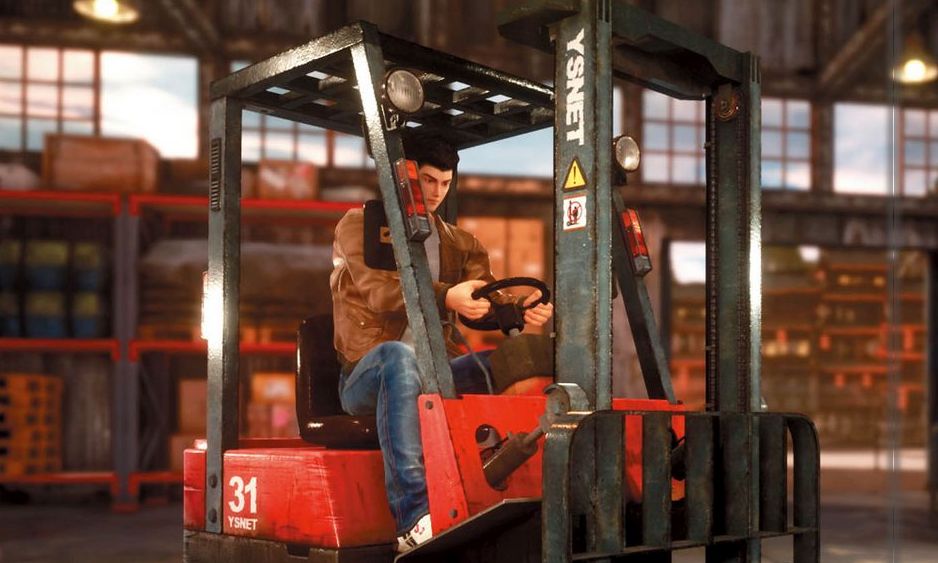 Today’s issue of Weekly Famitsu included an interview with Shenmue III Director Yu Suzuki, who showcased a screenshot showcasing the iconic forklift for the first time and provided new elements about the gameplay.

Suzuki-san explains that the story of Shenmue III starts shortly after the end of Shenmue II.  We also learn that Ryo will feel hungry and will be able to purchase food at stores. By eating a variety of food, he will recover HP.  There are also gacha vendors, and complete sets can be sold for a high price or exchanged for technique scrolls.

In battle, strong techniques can be executed with simple controls so even beginners can play. On the other hand, it’s also possible to fight like in the previous games. The game includes two types of martial arts practice, one that lets Ryo improve his strength (called “endurance” in the English menus), and the other his techniques. The combination of those two elements is important.

In the initial location, there is an arcade where you can play by converting money into dedicated currency. If you win and accumulate that currency, you can exchange it for prizes, which can, in turn, be sold at a pawn shop. This is a change from Shenmue II (where Ryo could gamble with real in-game money) made in order to sell the game on the Chinese market, where the authorities are very strict against gambling.

There is also a “turtle race” minigame in which players can press the right buttons to cheer on their chosen turtle. It will accelerate if the button sequence is successful, and decelerate in case of failure.

Interestingly, we get to take the first look at the iconic forklift in game, which is also related to part-time jobs.

Shenmue III features economic balance and an economic cycle. Money is important because the economy controls its flow, and it can be earned in many ways. For instance, if you gather a specific medicinal herb in the mountains and use it to prepare a traditional Chinese medicine via a recipe, you can sell it for a high price. There are various elements of gameplay connected to money.

Technique manuals can be earned in several ways, purchased at pawn shops, or earned via gacha sets. Collecting specific groups of items and exchanging them at pawn shops can also net you unique manuals. Suzuki-san was very careful about the balance around money.

Of course, it’s possible to fish by renting or borrowing a fishing rod. There are various fishing spots including river, ponds, and even caves. There are several types of fishing rods, with different performance. You can exchange fish for money by weight, and there are also fishing competitions. The game even includes something like a stamp rally which prompts you to visit various fishing spots and collect different catches.

If you want to see more about Shenmue III, you can also enjoy the latest trailer which finally showed a glimpse of combat, a batch of screenshots, even more recent screenshots, additional images from a few days before and a recent video showcasing the making of the English voice acting.

We’re just a few months away from the massively-anticipated release of Shenmue III, which recently closed its crowdfunding campaign at a whopping $7,179,510.