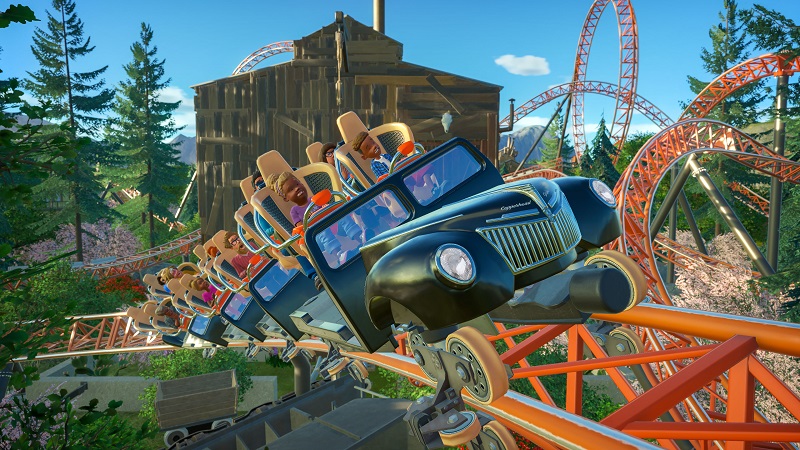 Planet Coaster features rides so realistic that one might think they were based on actual real-world coasters. As it happens, some of them actually are, including the upcoming Copperhead Strike ride that was just announced by Frontier Developments.

The developers revealed earlier that the brand new ride will be available for players later this month. The ride is said to be a faithful recreation of the actual Copperhead Strike, a double launch coaster that just recently opened at the Carowinds amusement park in North Carolina.

The car of the roller coaster was designed to resemble a classic American hot-rod while the track layout will include a great number of dizzying twists and loops. If visiting the Copperhead Strike is not an option for you, taking the in-game coaster for a spin is the next best thing as the Planet Coaster version is a realistic 1:1 recreation of the original.

Players will be able to incorporate the Copperhead Strike in their parks very soon because the coaster launches on April 16 via a free update.

In addition to announcing the free 1.11 Copperhead Strike update, Frontier Developments also revealed a new batch of premium content. The upcoming DLC pack goes by the name of The Classic Rides Collection and will launch alongside the update on April 16.

The Classic Rides Collection introduces nine new coasters and will be available to purchase for $10.99. The DLC is not yet available to pre-order but you can grab it from Steam or the Frontier Store once it launches next week.

The new rides have not been revealed just yet but the developers did say that one of them will have two variations. The devs also mentioned that some of the coasters will be showcased over the next few days on social media so keep an eye on their official channels if you want to learn more.

Meanwhile, Frontier Developments will be hosting a live stream on the Planet Coaster YouTube channel on April 10 at 7 p.m. UTC, which will focus mainly on the Copperhead Strike. The developers will have Carowinds Rep Lisa Stryker on as a special guest and will be giving away free tickets to the Carowinds amusement park to a few lucky viewers.

If you’re still new to Planet Coaster, these tips on how to build a successful theme park should come in handy.