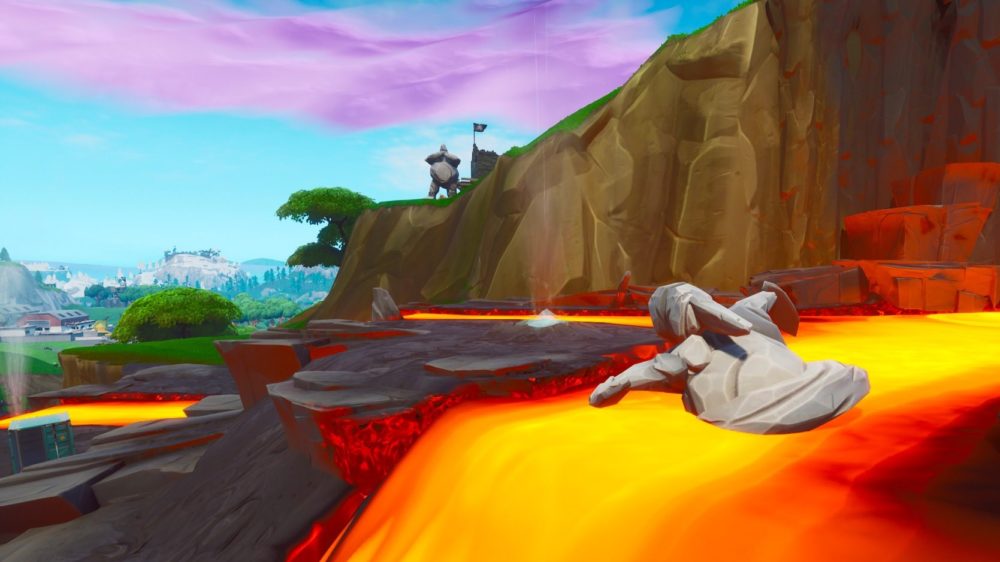 Love is a beautiful thing. It can blossom in the darkest of places and make you feel all gooey inside. It can make you overcome seemingly-insurmountable obstacles, all in the hope you’ll see your dearest again. That’s what makes Fortnite‘s stone golems such a brilliant, albeit unnecessary storyline you should at least know about.

In the beginning stood a lonely golem, chest of looty goodness by his feet, reaching out into the distance. We’ll call him Stoneo (shout out to Redditor Pr_Bolivia for the names). Residing by Tomato Temple back in January, he looked off into the distance, longing for his soulmate.

Over time, our beloved Stoneo has wandered his nearby surroundings on the map. With each update, he crept and moved into new spots, and before long, he was stood by the lava flowing out of the volcano that sprouted in the northeast section of the map as part of the Season 8 update. Looking across the molten rock, he longed for someone to melt that big ol’ igneous heart of his. Enter Geoliete.

Across the stream of lava they locked eyes. Knowing they were meant for one another. Being the charmer he is, Stoneo plucks a nearby flower, offering it out to his one true love. Heck, her motionless pose even looks relatively excited and “won over” by the gesture.

With love taking over, Geoliete has since dove into the lava, and can now be seen swimming… or struggling through the lava in the hope she’ll soon be able to live happily ever after with her beloved. Our poor dude Stoneo can do nothing but look on in sheer terror and disbelief. He even dropped his flower, the poor guy. He’s probably also quite smitten by the display of affection, so we’d like to think.

Alas, that’s currently all she wrote. Fortnite fans now simply have to sit and wait for the next update to find out whether or not Geoliete will strive through the molten pain and emerge in one piece. Will they live happily ever after? Or will Stoneo have to watch his beloved turn into a glassy mess?

I’m aware this entire post sounds mildly insane, but there’s something about these little stories and back-and-forth jokes with the community that Epic takes the time to cultivate within Fortnite’s Battle Royale world that’s so endearing. Just last season, Epic continued to troll and joke about a doorway that was initially blocked with one chair, and progressively continued to add to the pile. It got a bit out of hand…

Does it serve any real purpose? No. Is it weird and kinda fun? Absolutely. It’s nice to see Epic interacting with the Fortnite community and following up on these little jokes. If nothing more, it shows they’re listening. Perhaps not in terms of those Siphon and Materials reversions… but they are listening.

Anyway, now that you’re aware of the romantic and (potentially) tragic tale of Fortnite’s Stoneo and Geoliete, I’m off to spread the word and tell more people about a virtual rock couple in a game who move as part of weekly updates. Don’t act like you’re not just as caught up on this as I am. We both know you are.