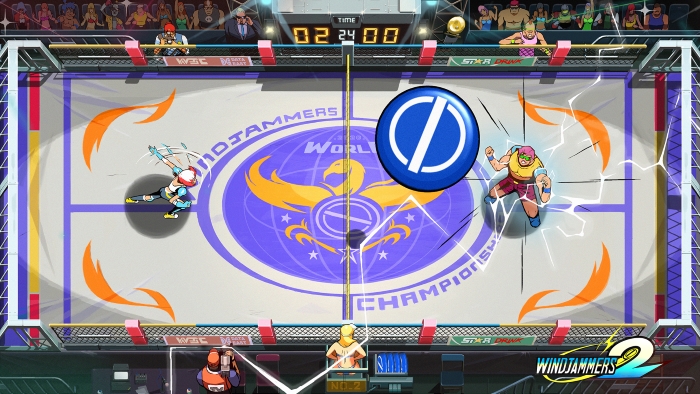 Dotemu has just released a Windjammers 2 gameplay reveal trailer to give fans their first look at the game in action. The video features the characters Wessel, Mita, Grace, and Max engaging in intense and stylish disc throwing matches.

For those unfamiliar with Windjammers 2, it is the sequel to the Data East arcade and Neo Geo game Windjammers. Initially released in 1994, the game managed to maintain a cult following over the years and has been re-released on the Wii, Vita, PS4, and Switch.

Like the first game, Windjammers 2 will feature two-player matches where the objective is to throw a disc into your opponent’s goal while defending your own. While this may sound simple, the depth of the game comes from a cast of characters who each have unique attributes and special moves.

Windjammers 2 will include characters from the first game as well as some new roster additions. Additionally, the developers are also adding a handful of new stages for players to chose from.

By making a sequel, Dotemu is hoping to continue to grow the community around the games by exposing even more gamers to the franchise. Providing a new and updated version of the experience offered by the first Windjammers should help the developer entice some new fans.

With this in mind, the gameplay shown off in the new trailer does a great job capturing the spirit and style of the original arcade game that made it such a cult hit. It is worth noting that the developer has said that the footage used in the reveal is alpha gameplay and is not entirely representative of the final product.

You can check out the gameplay trailer below. For more on Windjammers 2, be sure to read our coverage of the game’s original announcement. Windjammers 2 is set to launch on Switch and PC later this year.