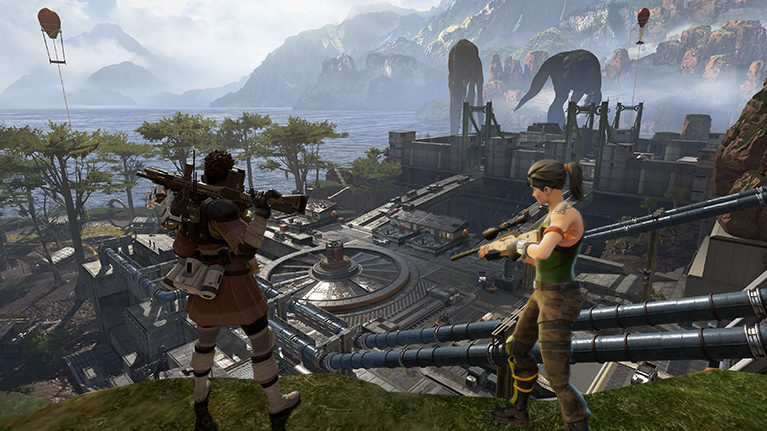 Ever since Apex Legends had its surprised release in early February, Fortnite has adopted a few of its best traits into its own game.

Apex has a fantastic pinging system wherein you can ping items, locations, enemies, and more using RB on Xbox One, R1 on PS4, and the mouse wheel on PC, allowing team communication regardless of who is on mic. 24 days later, Fortnite also decided it wanted to have a pinging system as well and added it to the game in an update.

Apex is very forgiving in that its allows fallen teammates to be respawned so long as their tag is picked up within 90 seconds and brought to a beacon. Thanks to data miners, apparently Fortnite will likely be adding ‘second chance buses’ sometime soon where a dead teammate’s tag can be brought to the bus for them to be respawned as well.

With all the things Forntite seems to be taking from Apex, there is one thing that Apex might want to look to Fortnite for when considering its own battle royale, and that’s its Battle Pass.

Just recently, Season 1: Wild Frontier dropped for Apex allowing you to level up through 100 tiers with each one granting the player a reward. This is very similar to Fortnite’s Battle Pass layout, which is now on Season 8.

The pass costs 950 Apex coins with the lowest bundle offered in the shop being 1000 coins, and you cannot just buy the pass separately without them.

This feels like a slight cash grab that is sure to pay out over the millions of players for Respawn, but if you save every single coin from Season 1 you will have just over 1000 for Season 2 so you can play it for free.

Even if you don’t buy the Battle Pass, you can access a few free items at certain levels including

But here’s the thing, the rewards are pretty underwhelming. Not just for the lack of ‘good’ stuff, but the ‘good’ stuff being basic and repetitive. You can find a detailed breakdown of all the rewards here.

For example, a big draw for players would be to get a bunch of cool weapon skins. Besides a rare ‘Thrill of the Hunt’ Epic skin for the Prowler at Level 51 and two Legendary skins for the Havoc at levels 100 and 110, the rest are just using the same three patterns across all the weapons.

The three patterns as seen above include:

Using only three designs for the rarer item in the battlepass seems pretty underwhelming. Making up the rest of the battlepass is more common and less exciting stuff like stat trackers, banners, Apex coins, Apex packs, and intro quips.

For players who don’t have friends on their platform to play with, these 10 levels are essentially useless since they hinge on being in a party. So one tenth of the entire Battle Pass won’t apply.

There are also only four character skins offered, the first three for Lifeline (Revolutionary), Wraith (Survivor), and Mirage (Outlaw) unlock upon buying the pass, with an Octane skin (Messenger) unlocking at Level 48.

But, remember that the Octane unlocks for free anyways so really you are only getting three skins when you buy the Battle Pass, and there is no incentive to grind for them since they are given to you right away.

The only truly memorable items are the ‘Thrill of the Hunt’ skin for the Prowler, which sports a golden shine akin to golden weapons in Overwatch.

And the final two Legendary skins for the Havoc, which have the really cool feature of having more special effects while shooting depends how many kills you have in a single match. Upgrading after one, three, and five kills.

The Havoc skins are the most thought-out aspect of the pass by a mile, no doubt due to their placement at levels 100 and 110. Is the average player ever going to have a chance at getting these in the three month season period?

Likely not, as to do so would require one to play for around a couple hours every day averaging at approximately 6,000 XP a game and using those stacked BP bonuses with a party to make it even faster.

So at its root, this Battle Pass has EA written all over it. Buying the battle pass is really just an invitation to then buy the 25 level booster, and then additional levels as the season comes closer and closer to the end. This pass doesn’t want you to play, it wants you to pay.

What Fortnite does well with implementation of its Battle Pass is recognize the root reason a great deal of players even want cosmetics in the first place is to show off to other players in-game.

And if the cosmetics can quickly convey that a player has reached a high level to get it just by looking at them, this only encourages that feeling.

Hence why the evolving skins in Fortnite have always been such a success. This is when a basic skin becomes more detailed over time with additional special effects depending on either what level you reach in the battle pass or what challenges you have completed.

This is where Apex falls short. It’s foolish to think that an average player would see the level 94 Patchwork G7 Scout skin, and be just as impressed with it as the level 4 Patchwork Hemlok skin. They look the exact same, and you’re dedication in getting to level 94 will be lost on likely 99% of players looking at you.

What’s frustrating is at least there is a somewhat easy fix to this, where only Navigator skins were available from level 1-30, Harvest skins from 31-61, and Patchwork skins from level 62-100.

At least then there was some indicator the basic weapon skins mean you have reached a certain level while you also grind for the epic and legendary items.

Compare this to Fortnite, where the first phase of the skins looks largely different than the final levels. It’s clear just by a glance a player has put in time to unlock that crazy mask and pink lightening special effects, and this is satisfying for players and makes it feel worth the effort.

For casual players, this makes a big difference as going into the season they might be able to make it to halfway or do half of the challenges.

At least then they could get to the skin level where he now has a cool mask, but no lightning. There is still a clear indicator they put in the time and has come out with something to show for it.

Unless you reach level 51 for the epic Prowler skin or level 100/110 for the legendary Havoc skins, you don’t really have anything to show off for grinding through Apex’s Season 1 Battle Pass, and that’s hugely disappointing.

You’ll have a ton of stat trackers and intro quips though.