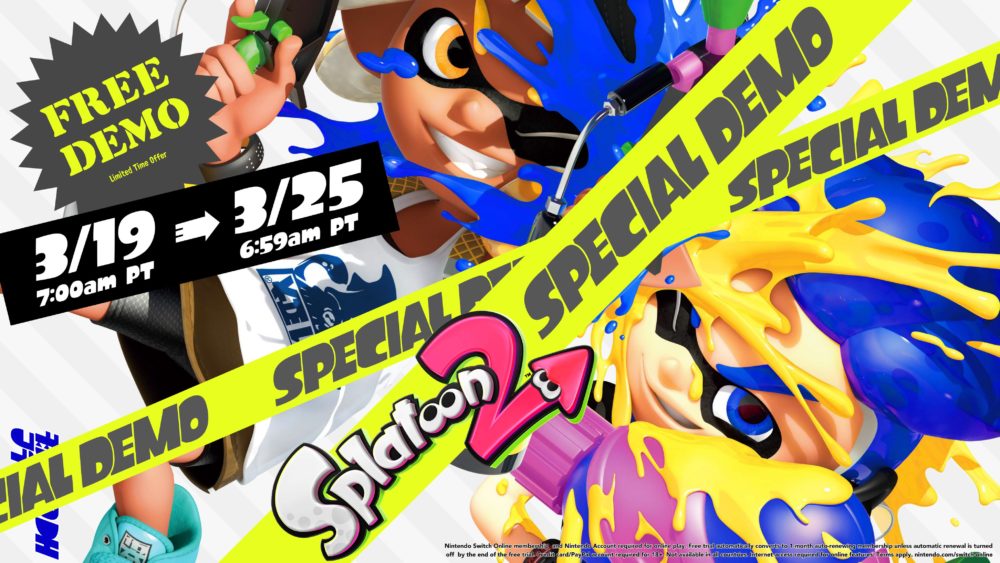 People usually don’t think of Nintendo, when it comes to talking about video games as a service. Typically, the titles that are part of this discussion fall into the category of looter-shooter, shared-world, or like the behemoth that is the genre of battle royale.

But let’s face it, Splatoon 2 has been out on the Switch for almost two years now and Nintendo is still holding it up with all of their strength by implementing new updates that include new stages, weapons, and events like Splatfest, to keep people coming back. It may sound weird to say, but Splatoon 2 can be considered a game as a service now, believe it or not.

And now, Nintendo is offering a special demo for those that have never jumped into the unique inktastic multiplayer shooter.

Players with a Nintendo Switch Online membership can join in on the Splatoon 2 online demo between 7 a.m. PT on Tuesday, Mar 19, and 6:59 a.m. PT on Monday, Mar 25.

“That means you’ll get to check out 4-on-4 Turf War battles as well as Salmon Run, League Battle and Ranked Battle modes online with your friends and other players who own the full game.

Cover the turf with your team’s colorful ink, customize your look with different weapons and apparel, and splat your enemies in an all-out ink-stravaganza!”

If you don’t have an online membership yet, you can receive a 7-day free trial by downloading the demo; an email will be sent to you soon after, with the code attached.

And also, if you end up having tons of fun in the demo event, you can then purchase the full game at a 20% discount, marking the game down to $48 or so. Oh, and don’t worry, your progress from the demo will be carried over so you can continue playing with your character.

For more on Splatoon 2, you can read our review right here and feel free to look into our wiki guide as well. Recently, there was a Splatfest in Splatoon 2 that made players choose between Knights or Wizards, of course, Team Wizards came out on top and was victorious.