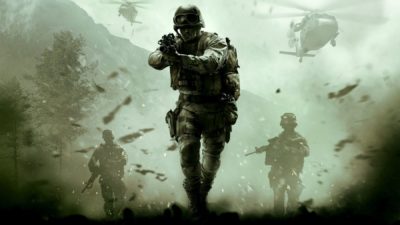 What the Best Perks Are in Modern Warfare Remastered

Frag X3 – Having three frag grenades, once you’re able to to, is a must in Modern Warfare Remastered. Not only can use take advantage of spawn points, but you can clear out rooms in objective based modes. They also very powerful items that can be chucked from a long way away.

An argument can be made for Claymores or C4 if you’re a shadow lurking sniper, but Frag X3 gives you more options. Of course, you’ll have to choose something else until you unlock it, though.

Stopping Power – When it comes to the best perks in the game, there are two that almost every player uses. The first is Stopping Power, for a few reasons.

First of all, when a perk increases your damage on all weapons, can you really say no? Not only does it generally make you more powerful, but it’s the perfect counter to Juggernaut, which we’ll get to next.

Juggernaut – If you can’t beat ’em, join ’em, hey. Juggernaut is famous in the Call of Duty world as one of the most annoying perks, but that’s for a reason. Giving you more health, it can be a huge help on the battlefields of Modern Warfare Remastered.

Also, since most players almost learn how many bullets are needed to kill an enemy, they’re often knocked off their stride when faced by someone using Juggernaut, giving you the chance to take advantage of your extra health. There’s no need to be embarrassed.

Steady Aim – The choices in the third perk slot in Modern Warfare Remastered are a little more limited. Steady Aim is a good choice when you’re using short range weapons like SMGs or Shotguns.

Having Steady Aim equipped makes hip firing much more viable. Also, it makes no-scoping with snipers a lot easier, if you’re after some fun.

Martydom – Martydom is another annoying one, but that’s why it’s one of the best perks. When you die, you leave a live grenade behind to surprise the enemy that killed you.

Seeing an enemy inadvertently run over your body, only to be thrown into the sky, is so satisfying. It won’t help your killstreaks, and relies on you dying, but it’s very helpful, particularly on smaller maps in Modern Warfare Remastered.

That’s everything you need to know about what the best perks are in Modern Warfare Remastered. For more tips and tricks on the game, be sure to search for Twinfinite.

Warzone: How to Get Specialist (All Perks)
Destiny 2 Season of Dawn: All Ritual Weapons (Perks, Vanguard, Gambit, Crucible)
Outer Worlds Flaws Explained: What They Do & Should You Accept Them

Can You Remember Which Year Each of These Popular Comic Book Movies Came Out?