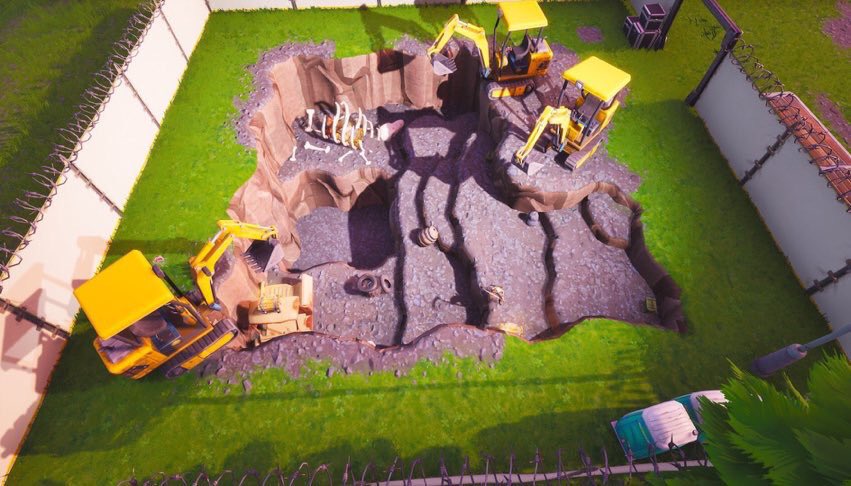 There have been plenty of mysteries in Fortnite. Where was that meteor going to destroy? What the hell’s going on with this secret base with a giant rocket? Why’s this giant purple cube bouncy and stuff? Why did you do Kevin like that at Loot Lake (RIP Kevin)? Now five weeks into Season 8, Epic seems to have properly kicked off its mystery event, and it looks like it’s going to involve a lot of digging.

In case you’ve not a clue what I’m talking about, let me get you up to speed. An excavation site has appeared in H7 on the map, just on the borderline of the green grassy biome, and the desert biome that occupies the southeast section.

Sightings of the dig site appearing in-game appear to have started at around 6:30am EST on Thursday, though Reddit user PokemonLegacy6 had shared the leaked excavation with multiple stages prior to this on Wednesday. The site had the same white panel fencing that can be found around the research site at the bottom of Dusty Divot, suggesting that in terms of the lore, there might be some connection here between the two locales.

More on that later.

Initially, players were faced with a seemingly insurmountable task. A pile of rocks, each of which had anywhere between 375,000,000 and 500,000,000 HP to chip away at. Weapons and harvesters both dealt damage, but even so, that’s a lot of digging and explosions.

Turns out the HP of these rocks was synchronized across the entirety of Fortnite. Every swing at the rock with a harvester deducted that damage in every single game being played. There have been some interesting breakdowns of the excavation, with Reddit user GKrollin sharing down the data they collected while taking part in it.

Players managed to get to the bottom of the excavation in less than 24 hours. More impressively, DPM averaged out somewhere in the range of 8,278,122 according to GKrollin’s data, and 15,352,454 according to 7strike. Quite the margin, but even at the lower end of the scale, that’s an impressive rate of digging from players. GG all!

As cool as the idea and technology behind it is, what lay in wait at the bottom of this first dig site on Fortnite’s map was somewhat disappointing. As players hacked away at the five different layers of rock, they unearthed some dinosaur bones, a chest, and finally… a volcano vent. How underwhelming. Here’s a shot of it below.

So what does it all mean? There’s a general consensus that this isn’t the last we’ve seen of these dig sites, and some players are claiming that the next dig site will pop up near Loot Lake, as it can be seen when entering the ‘Feedback’ mode and has the same ‘special dirt’ tag that appears at the first site.

Others believe the similarity in fencing between the first dig site and that of Dusty Divot may be hinting that a mysterious group within the lore are on the hunt for Hop Rocks again, following their introduction at the beginning of Season 4 following the meteor crash.

Or perhaps players have to dig out these geysers to relieve the pressure from the volcano and prevent the long-rumored volcano event that could destroy parts of the map. The ‘irony building‘ in Tilted Towers is certainly trolling players that the volcano could be next, with its display of meteors, a rocket, and Kevin the cube all looming over a little model of the popular named locale.

There’s no way we’re going to fall for that again Epic. They wouldn’t do that to us… but then again, the recent health-on-kill reversion doesn’t fill me with confidence. Don’t kill Tilted!

Whatever it turns out to be, Fortnite’s dig site is certainly the beginning of the next big thing to hit the map. What it will ultimately bring remains a mystery for now. Just please be more interesting than another volcano vent.