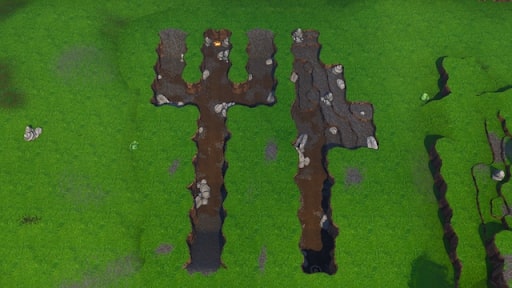 Fortnite’s Fork Knife has been a thing for a while. There were Fork Knife trucks in Season 6 by its soccer stadium, and as part of Season 8, Epic Games added in Fork Knife trenches nearby Fatal Fields. Now, though, it’s gone rogue, and a Fork Knife killing spree is currently underway.

We’re not even joking here. The trenches, which can be found just northwest of Fatal Fields, appear to be eliminating players who venture close to the landmark. According to a tweet from the official Fortnite Twitter account, the development team is currently looking into it.

They’ve even provided a humorous warning to players to avoid the area in the meantime.

Beware the Fork Knife! We’re aware of an issue with players being eliminated when walking around the Fork Knife near Fatal Fields.

We’ll be releasing a fix for this issue shortly. pic.twitter.com/15D0Ud6TCg

Specifically, it appears as though players must drop into the edge of the knife (its east side) in order to be eliminated by the fearsome Fork Knife. Simply wandering around its outskirts or diving into the fork has yet to replicate the issue. It’s just that darn sharp knife-edge!

Currently, it remains to be seen whether or not this will require Fortnite downtime or further updates in order to be fixed. For now, it’s simply a case of holding on and waiting for Epic Games to keep us posted on the issue.

It shouldn’t be too long until the Fork Knife is safe to revisit and make jokes about once again.

Fortnite has just started its eighth season, bringing a boatload of cosmetic items, new features such as Pirate Camps, Cannons, and even today introduced a new Buried Treasure item that guides players to buried chests teeming with legendary loot.

We’ve got a complete Fortnite Season 8 wiki should you need a hand completing the various weekly challenges, tracking down the week 1 secret star, or just want to know everything about what’s new in this latest pirate-themed season.