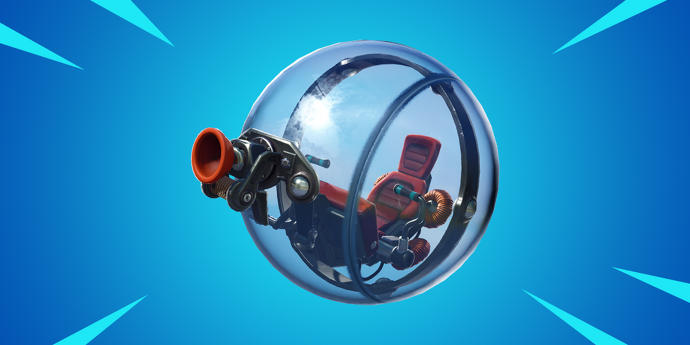 If I told you that a hamster ball vehicle was going to arrive in Fortnite six months ago, you’d stare at me blankly, laugh, and say that it was a ridiculous idea. Yet, this week, Epic Games dropped ‘The Baller‘ onto the map and, honestly, it’s the most fun I’ve had just traversing Fortnite’s map since I started playing over a year ago.

Ridiculous name aside, The Baller feels like a pretty brilliant addition to Fortnite’s array of weapons, items, and vehicles.

Where the X4-Stormwing of last season divided players over whether or not it was overpowered and should be in the game, The Baller immediately feels balanced, namely because you can’t really deal any damage when you’re riding about in it.

That’s not to its detriment though. The Baller (this will never stop being weird to type out seriously) is all about fast-paced traversal of Fortnite’s map, regardless of the terrain that lays before you.

Need to blast your way up a mountain away from the encroaching storm circle? Fear not, you can do that. Need to get through that body of water without making yourself a slow-moving duck? It’s got that covered. Want to roll down a hill for fun? You can do it and not take fall damage. It’s great!

That being said, The Baller is easy to pick up, but pretty difficult to master.

Upon initially finding one and clambering inside, I awkwardly boosted myself into motion. I tried climbing up the side of a mountain by using the Grappler, only to very slowly get half-way up before grinding to a halt and plummeting back down. Turns out, it’s all in the motion of the ocean, as the middle-aged folk say.

After a bit of trial and error, I finally cracked it. By boosting to build up speed, and then firing out my Grappler in front of me, but slightly off-center, I could then rotate around the grapple point, building momentum.

Releasing the Grappler just as I came in-line with it thrust me forward, which, when combined with another boost, and another Grapple slightly off center on the other side, continued to propel me forward with ever-increasing speed.

Soon enough, I was scaling the tallest mountains on Fortnite’s map with relative ease in my perspex ball of protection at lightning speed. Shrinking storm circle? No problem for my plunger-equipped hamster ball!

Sure, in terms of offensive capabilities, The Baller leaves a lot to be desired. Well, it leaves everything to be desired, with no obvious weapon to speak of, but you can just beat someone to death by constantly boosting into their face, as seen below. It’ll take some hard work and determination, though, especially thanks to its low health.

Ganged up on someone with the balls from r/FortNiteBR

It doesn’t take long for an enemy to destroy your spherical bundle of joy, helping to keep the playing field balanced regardless of whether you’re Fortnite’s equivalent of Spider-Man in a hamster ball, or the one trying to gun them down.

The Baller is the kind of vehicle that feels right in Fortnite. It’s zany, well-thought-out within the balance of the game, and just an absolute ton of fun to mess around with once you master it.

It’s not going to get you that Victory Royale, but it’ll be difficult to wipe the smile off your face once you’ve got to grips with how it handles.