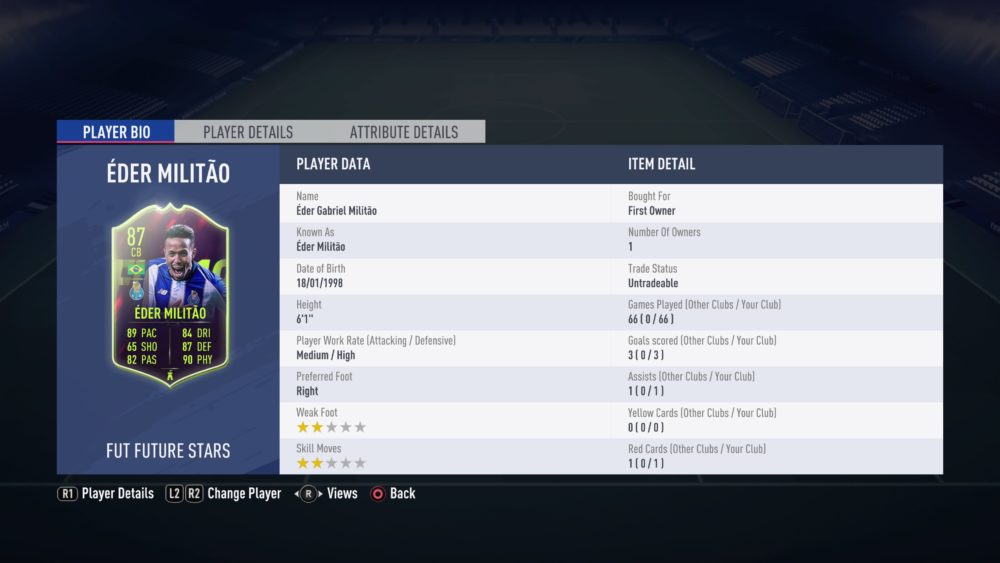 Does Eder Militao Have a Real Madrid Card in FIFA 19? Answered

With so many players moving clubs nowadays and EA Sports releasing so many Ultimate Team promos, it’s difficult to keep up with all the players in the game. Here’s everything you need to know about whether Eder Militao has a Real Madrid card in FIFA 19.

The spanish giants have announced today (March 14) that Eder Militao will be joining them from Porto in a deal worth 50 million euros.

He will join Real Madrid from the Portugese club at the end of this season and he is the club’s first signing since Zinedine Zidane returned as Head Coach.

Unfortunately, Eder Militao does not have a Real Madrid card in FIFA 19, at least not yet. While EA Sports usually update player cards in the game when they change club, since the young Brazilian defender has not begun playing for them yet, a new card will not be added to the game quite yet.

You can expect it to happen before FIFA 20 rolls around, though. When other clubs begin signing players during the summer transfer window, a Real Madrid version of Eder Militao will likely be added then. We will be sure to update you once it is though.

Currently, Eder Militao has five different cards in FIFA 19. They’re all for Porto (sorry Real Madrid fans), but they’re not all in the same position. The five cards that you can get in the game are:

All of the Eder Militao cards in FIFA 19 can still be purchased on the transfer market and they range from 600 coins for the Common Gold to 320k coins for the Future Stars card. You can see the latter’s stats above. Any Real Madrid card would be a variation of the Rare Gold.

That’s everything you need to know about whether Eder Militao has a Real Madrid card in FIFA 19. For more tips and tricks on the game, be sure to search for Twinfinite.